Top Community Engagement tips from this Jurassic monster of a tour!

Erth’s Dinosaur Zoo just finished up a hugely successful tour of regional WA through Lotterywest Shows on the Go – including sell out shows and extra performances that had to be added at the last moment to cater for popular demand!

A lot of the reason for this huge response was an incredibly strong involvement from communities presenting the show. So, we thought we’d share some of their wins and engagement ideas with you – so that you too could get your community fired up for a coming show! 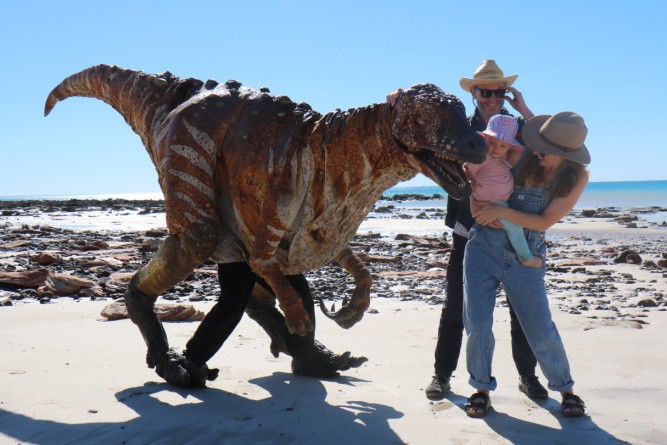 Dinosaurs were spotted stomping around the beach in Broome. Picture by Dolores Kinsman.

Presenters in 18 communities spanning the state from Derby to Esperance offered a wide variety of local community activities to engage and entice community members. The notion of performing arts tours bringing “just a show” is no longer. It’s something we hear all the time at presenting workshops and we’re beginning to see what it really means when put into practice! Presenters are offering unique and memorable experiences before the show opens to entice and delight their community; partnering with local organisations and offering the chance to showcase their wares, promote their services and be involved.

Here are 5 top tips presenters found were a recipe for success in their communities:

1. Get social media happening before the tour arrives 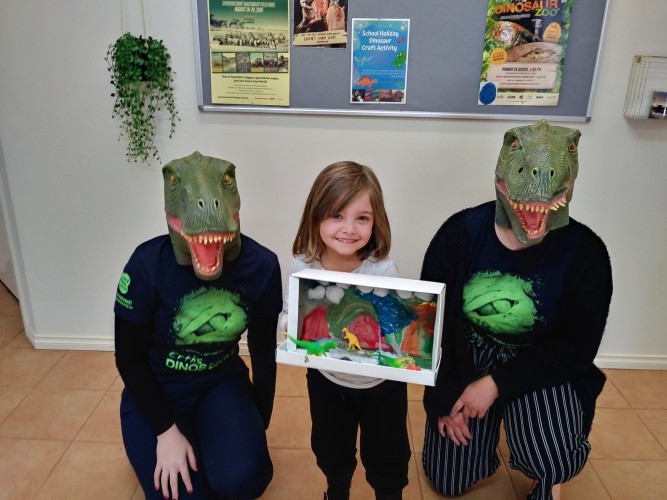 Dinosaur suits were an absolute hit in some regional communities. Four presenters donned a T-Rex inflatable suit and staged random appearances throughout the community to delight and promote the upcoming tour. A T-Rex was spotted at the school in Ravensthorpe, working out at the gym in Mukinbudin, running along the jetty in Derby and dancing in Katanning.

What great sports our presenters were! This created some social media buzz and great engagement prior to the show. One presenter couldn’t even post the final video they’d recorded as tickets were already sold out! What a wonderful predicament to be in!

Dinosaur footprints were also discovered all over the state, as presenters placed them in high traffic areas leading a path to the venue or the administration office where people can buy tickets. Social media posts alerted the community to where they may be located, so people could go searching for them. Artgold in Kalgoorlie created a dinosaur photographic competition online where community members were encouraged to upload pics of themselves. Click here for the lucky winner.

2. Entice people out and about in your community 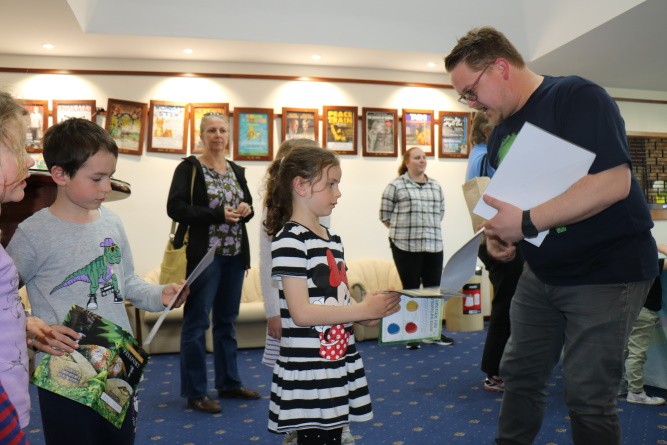 Time Currie from Esperance dishes out dino puppets for community members who completed the passport. Picture by Dolores Kinsman.

As part of the tour Erth Dinosaur Zoo audiences also got the chance to grab an Act-Belong-Commit Community Passport. This really got the community up and atom, as they searched for the dinosaur eggs that were stuck on the Erth posters around town. Eager egg hunters who completed the activity were rewarded with a dinosaur puppet they could make and decorate themselves. Artgold from Kalgoorlie created a community map and event for an epic Kalgoorlie Egg Hunt for everyone to be involved in. Getting community members active and working together like this was a great reflection on the Healthway Act-Belong-Commit message.

Presenters took the opportunity to offer dinosaur themed school holiday activities, such as “Make your own dino-rama!” in Mukinbudin. Other activities included colouring in competitions, paint your own fossil and more!

The show also toured with its own workshops: Younger children were able to make their own dinosaur puppet while the older ones got to experience operating the actual dinosaur puppets used in the show.

3. Invite other organisations in your communities to be involved 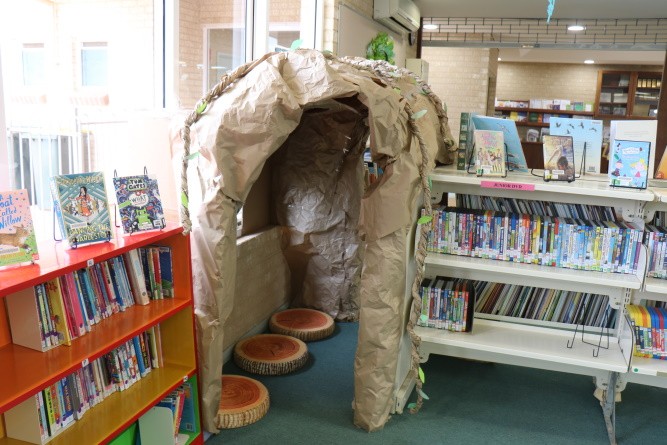 Many community organisations came together to create a whole of town event when the Erth team arrived in town. Dinosaur Coast, an organization promoting the dinosaur history in Broome, held various activities in the foyer of the Broome Civic Centre, including a dinosaur display, dinosaur virtual reality experience and a presentation.

Kalgoorlie had a free outdoor event for the whole town to attend, complete with local community organisations, such as St. Johns Ambulance, YMCA, Coates Kalgoorlie, Museum of the Goldfields, What Goes Around Comes Around from Kambalda and other food stalls. Face painting was a very popular activity on offer too!

Local libraries and day care centres partnered with presenters to share the dinosaur love. Some had dinosaur story time, whilst others offered dinosaur Lego playtime and craft and dinosaur egg hunts. The Erth dinosaurs even helped promote positive community programs, like the recycling bin initiative in Harvey.

4. Dress up your venue 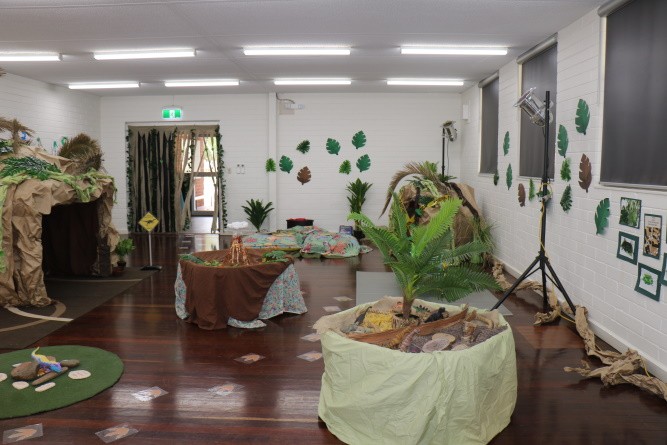 Paraburdoo made sure there was plenty of space to play and get dino-hyped before and after the show. Picture by Dolores Kinsman.

Community presenters did an excellent job with theming their venues and foyers like you had just walked into a jungle with palm trees and “Caution – dinosaurs!” signs. Some presenters sold dinosaur themed show bags and hand puppets, such as Harvey. Some even had jungle or dinosaur themed music for people to get into the mood prior to entering the show space. Karingal Neighbhourhood Centre took it to the next level by creating an interactive room resplendent with decorations and dinosaur themed activities for adults and children to enjoy prior to the show. This was well received by all!

5. Get the performers out in the community too! 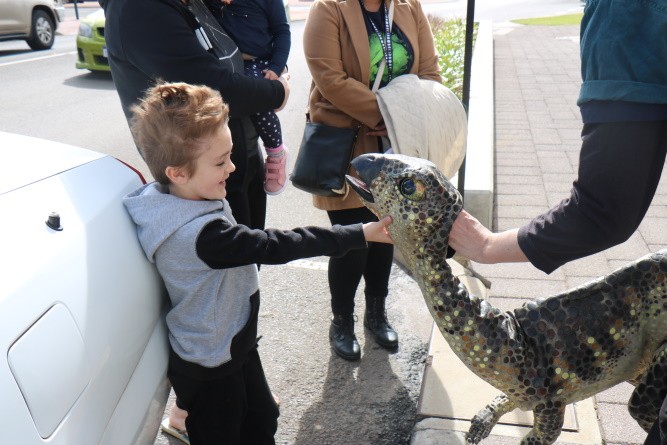 Katanning locals take a moment to stop and pet the dinos. Picture by Dolores Kinsman.

There were two opportunities for community members to get up close and personal with the dinosaur puppets: Prior to the show, the cast and crew, visited daycare centres in local communities, giving the littles who couldn’t see the show, the chance to meet the dinosaurs firsthand in this unique and personal experience. This brought much joy to the little children and the daycare staff in Lake Grace and Kalgoorlie. Those that attended the performance were also able to meet the dinosaurs post show and many a dino selfie was taken. These opportunities after the show were wonderful opportunities for audience members to ask questions and see the puppets in detail.

The dinosaurs were snapped in towns all over regional WA, including Ganthuame point in Broome, which is a location that has real life dinosaur footprints. The Australovenator (which was discovered in Australia) made quite the impression on local residents at the beach when media came to take promotional pictures for the show. The Ashburton VSwans managed to get a cute video of the dinosaurs stomping all over town!

The Erth’s Dinosaur Zoo show not only wowed the audience during the performance, it offered deep enriching experiences before and during the tour party’s stay in each community. These moments will be forged into the memories of children and adults alike, and are the lifeblood of community enthusiasm for the arts which helps creative communities prosper throughout regional WA.

Erth’s Dinosaur was presented by Act Belong Commit and Country Arts WA as part of Lotterywest Shows on the Go, if you want to know more about the program – including ways your community could get touring shows – click here.