It’s all part of one big journey.

Recently completing one half of her North Midlands Ebb+Flow residency in Carnamah, Martine Perret is currently elbow-deep in the preparations for her new exhibition – by far her largest to date – Belong, opening in Perth, 10 December 2021 – 6 February 2022. It is a culmination of new works and remounting of some of her previous works.

“Belong, is like putting five installations together at once. It’s a big project, with a strong focus on using multi-media to present the stories we are telling with a depth they deserve. And enable people to fully experience and immerse themselves in these stories and the culture. It is so very important that we tell these stories and that people see and hear them. Belong is a collaboration with speakers of Indigenous languages in WA from different regions. Visitors will journey through the multi-sensory installations and experience the power of Indigenous languages through the combined use of photography, video, sound, music, dancing and painting. The transference of these deep connections remind us of how language is so intrinsically linked to culture and well being.” 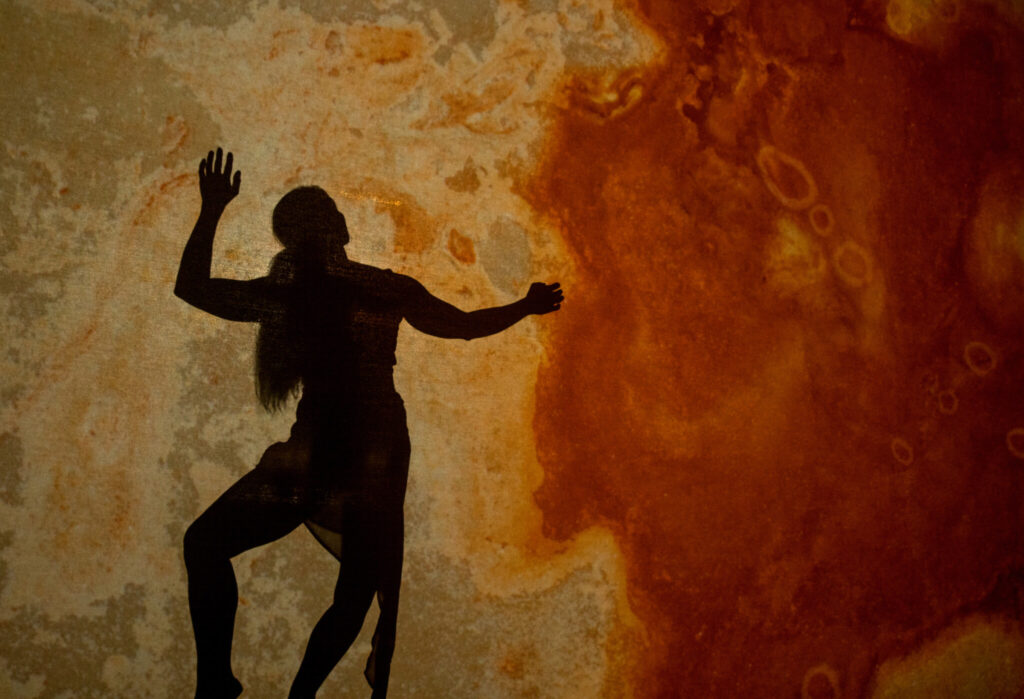 Dalisa Pigram dances amongst a projection of a micro photograph of landscape in Broome in a work created for the Belong Project. Photo by Martine Perret.

Like many artists, Martine is used to working multiple projects at the same time and is also looking forward to getting back to Carnamah in August to complete the second half of her residency. Instead of the one month stay, Martine chose to split her residency into two parts to better capture the landscape changes between distinct seasons, using aerial photography for her interpretation on the Ebb + Flow theme.

“The first thing I did when I got to Carnamah was get into the air. It allows me to take ‘the pulse’ of a place… get a reading and understanding of the land. It’s incredible. There are hundreds of salt lakes, plus all this farming land too. I expect it is going to look very different when I return in August. I’m also looking forward to completing the second aspect of my project and finish capturing some of the stories of the community. Especially the women on the farms. It’s not a side of the story we hear that often and I really wanted to tell some of these women’s stories. One of the hardest things to decide was which stories to include, they are all amazing. But so far, there’ll be a sheep farmer, an Indigenous artist, a woman studying to be a vet, another two women who are doing some great work with revegetation and planting trees, and a few others. Each person is going to loan an object of significance for the project as well, and I’ll be using aerial views, projections, and printed photography to capture these women’s stories and essences.” 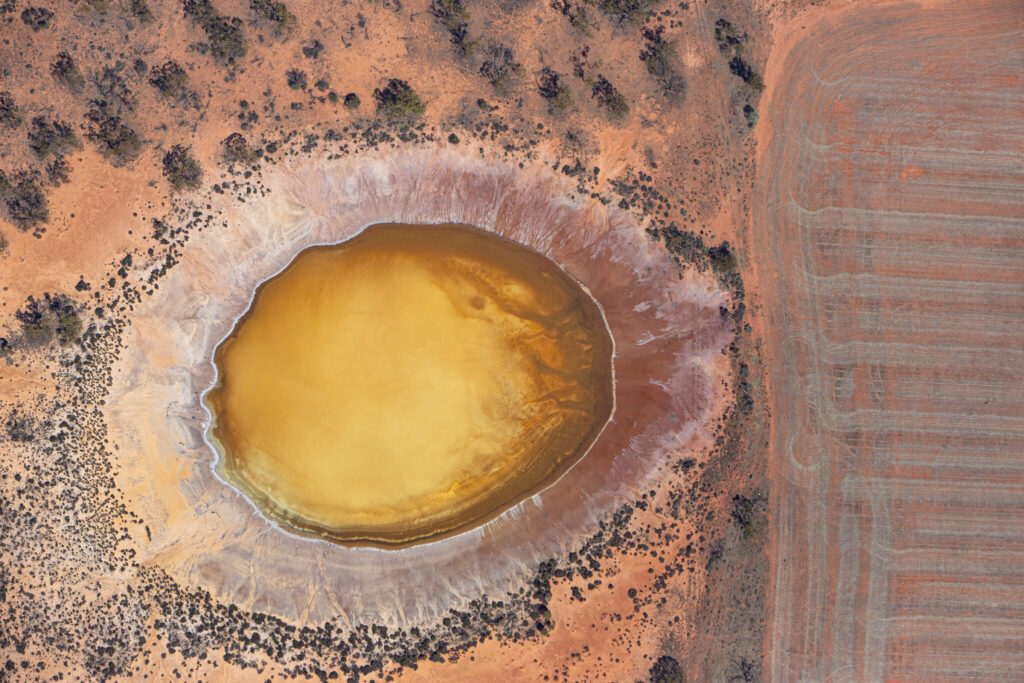 Aerial of the salt lakes of North Midlands taken in March 2021. Photo by Martine Perret.

Martine’s career started as a photojournalist with United Nations Peacekeeping Missions, spending ten years travelling to conflict countries to document and capture the stories of the people, cultures, conflicts, and work of the UN on the ground (even when she was in the air). The intensity of the work and the experiences in the field of telling compelling stories has greatly impacted on Martine and been a guiding influence on her works and projects since.

“It’s all connected. In some ways the projects I’m working on now, Belong, and Ebb and Flow are all influenced by the works and experiences that have come before. It’s like a fifteen-year journey. Many themes in my previous works flow through to future projects… the experiences of the past, enrich future projects, and of course we are always learning. I use a lot more multi-media now to give a more immersive experience and more fully realise the stories we are trying to share.”

And why so often from the sky?

“Mostly from when I worked with the UN. So often we were going into places too hazardous or simply not accessible by roads, so we would helicopter in. I probably did 300-400 flights in my time with the UN. I definitely missed the bird’s eye view… It was a bit of a shock, the cost to charter my own flights at first, but it also means I have complete control over where the flight goes, and where drones can’t always fly… if I want to explore more to the west or go back over a place, I can.” 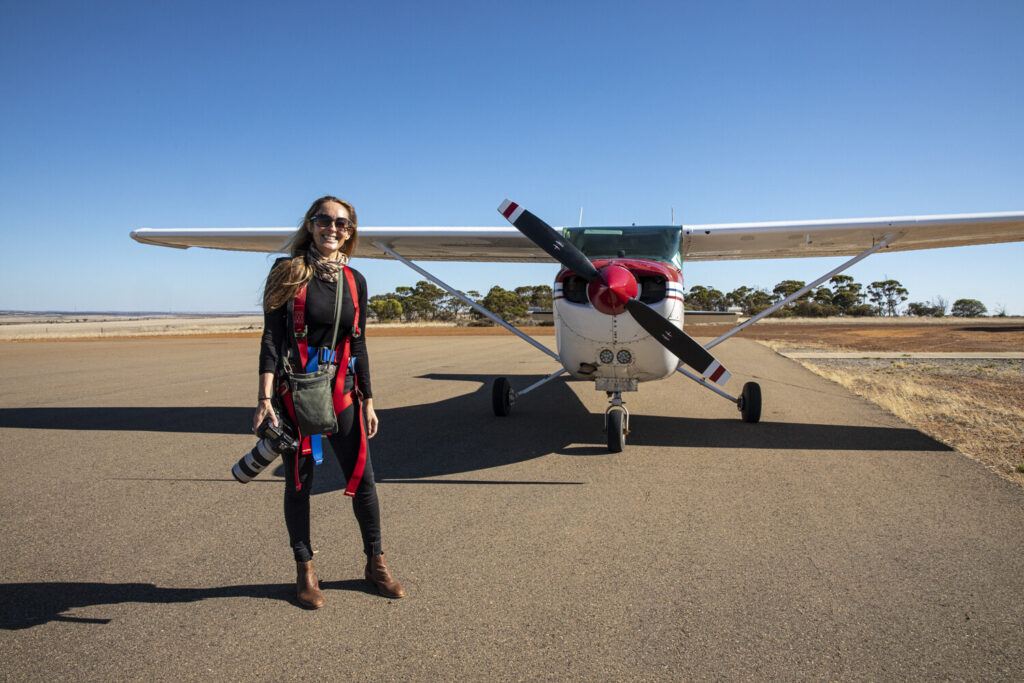 Martine Perret will take to the skies again in August in the continuation of her Ebb+Flow residency. Photo courtesy Martine Perret and North Midlands Project.

It’s impossible not to feel the determination and passion Martine has for her advocacy to share people’s stories and create a platform for these stories to be experienced and heard. She has worked with many Indigenous communities and elders on the issue of the cultural significance of languages, completed exhibitions in and about Margaret River and the Goldfields, had her works exhibited in Paris and toured across regional WA, and received several funding grants including UNESCO for new works.

Martine Perret is a visual storyteller, currently completing a residency with North Midlands for the Ebb+Flow Project and preparing for the launch of her exhibition Belong in Perth later this year to coincide with UNESCO’s Decade of Indigenous Languages, 2022-2032.

You can see more of Martine’s works and journey through her online platforms: PhotoShelter, Facebook, Instagram, and Linkedin.