Meet Crystal! She didn’t exactly run away to join the circus as a teenager, but she did travel across the country to embrace a career as a circus artist… 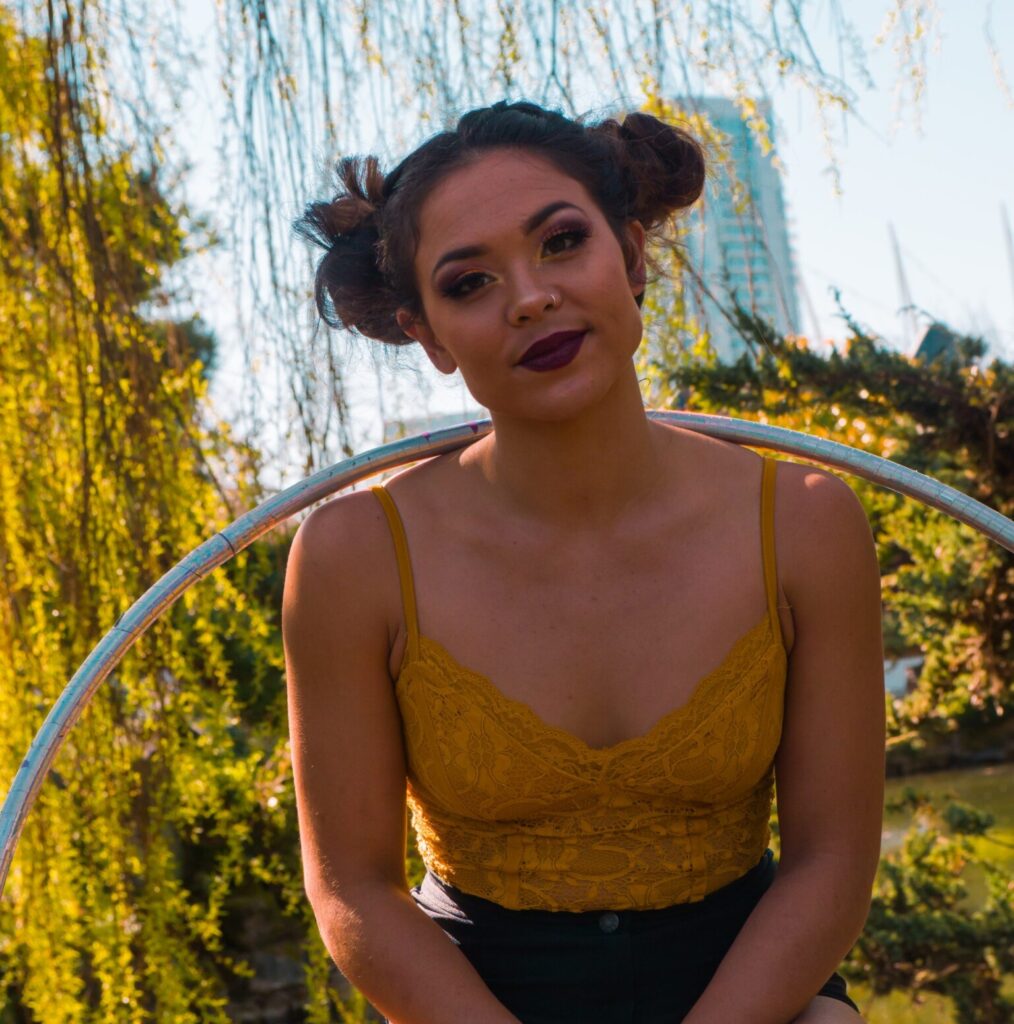 While growing up in Broome, it was a PCYC circus class that first introduced Crystal to circus performing arts and it quickly became a staple in her life. She worked hard at developing her skills and craft until she became a trainer herself and quickly realised it was not just a pastime, but a career path and way to explore the world beyond Broome. A realisation that became a conviction when she attended an Australia Youth Circus Symposium hosted by the Flying Fruit Fly Circus held in her hometown a few years later.

“It was almost Kismet the way it happened. I was mostly expecting to sit in on meetings and talk circus teaching techniques, but my friend, Casey Wood – a phenomenal handstander – had successfully applied and made the move from Margaret River a year before the symposium and with their enthusiasm of newly joined ‘Fruities’ I was sold on flying to Albury and auditioning for the Flying Fruit Fly Circus School… At that time, they traditionally took in younger kids, so my audition consisted of a lot of Year 3 kids.

I threw everything I had into that audition, literally. When they asked, ‘would any one like to display any other skills?’, I jumped up and did an improv ball juggling act as well as an improvised double trapeze act with another applicant from my hometown. At the end of the audition, they kept back all the applicants that had travelled to apply to give us our result. I remember my heart pounding. Looking back, it’s like an out of body experience, this decision was gonna change my life. I was stunned when they said that I had been accepted. I had gotten in! This is still one of my fondest memories and biggest achievements to this day.”

Within a year of being accepted, the 15-year-old Crystal had moved from Broome and relocated to Albury-Wodonga on the New South Wales-Victoria border. Training was two and a half hours every day for three years before graduating.

“Moving from Broome to Albury was a bit of a culture shock. The weather was so different to the tropic seasons of wet and dry season to now having a spring, summer, fall, and winter. It was amazing how the one place could be so hot, so cold, and so different. I definitely grew up quick too. There was no boarding school, so at first I stayed with a family who had a child enrolled in the casual classes at the Flying Fruit Fly Circus and later I lived in sharehouses. I think you can get itchy feet growing up in a small town and you do want to explore more. See more.” 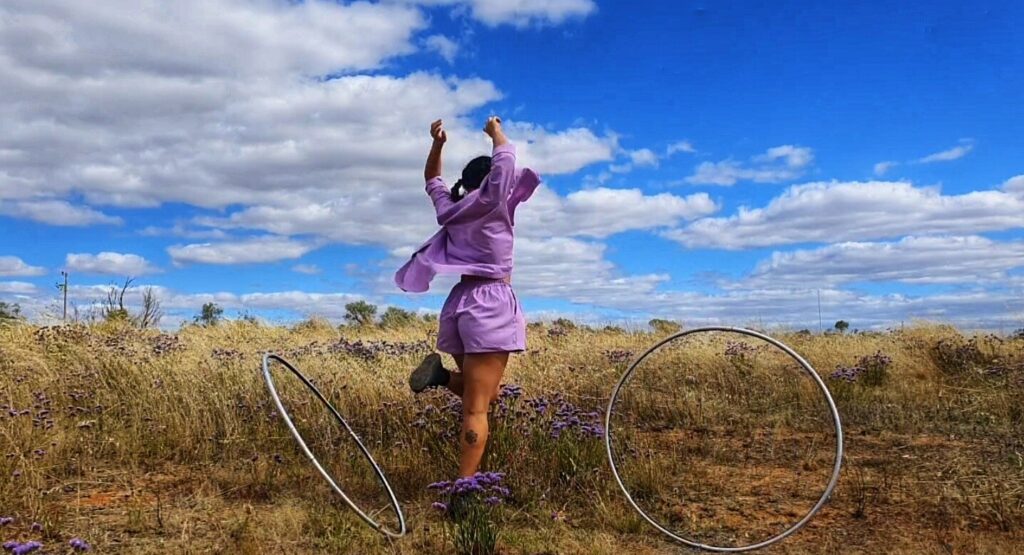 With over ten years of training and performing as a Circus Artist, Crystal refers to herself as a generalist, with her skill range including aerial (like silks and trapeze), acrobatics (including tumbling and pyramids), and manipulation (which involves anything that uses a prop like hula hoops, juggling etc.) After graduating from the Flying Fruit Fly Circus, Crystal, with several other performers embarked on a mentorship. Together they created the show Flipism, based around the concept of decisions being made on the flip of a coin, which was performed regionally including a performance at the Woodford Folk Festival.

From there Crystal, with three other colleagues, was offered a contract with Circa, a contemporary circus company based in Brisbane and began touring. After that, she became involved in the development and production of a new work, Hot Brown Honey.

“It was a political, intersectional arts, cabaret-style show, collaborating with women of colour from across Australia. It was a unique show and experience that celebrated different backgrounds, ethnicities, and art disciplines. From contemporary dance, song, spoken word, burlesque, hip-hop and circus. It was an 18+ show that raised the middle finger to the patriarchy and was a block party for telling different stories. It was a show to make people think. Make them aware of their surroundings. We were sharing stories with a sprinkling of humour. Even the serious ones… I think that’s important. An important story for me, that was explored in the show, was domestic violence against women. I performed an aerial act symbolising feelings of being trapped, of having no way out. I also got to perform a comical hoop act about Aussies partying in Bali. I was born in Fremantle and have an Indo-Chinese heritage through my father, so I was able to draw on my unique experience of going to Indonesia for the first time as a thirteen year old to create that hula act, exploring the conflicting belonging of having an Indonesian and Australian identity.”

Fast forward to 2020 and like everyone, lockdown put a bit of a pause on things for Crystal, with the added obstacle of an incident that left her with two broken bones in her right arm after the structure she was performing on collapsed. The timing of the Ebb+Flow Residency presented an ideal opportunity for several reasons.

“It was my first residency and just amazing. I didn’t know what to expect… but it was beyond what I had imagined. The residency gave me freedom… space to explore. It gave me a chance to reconnect with my practice… It was a time of healing for me. I was able to get back into the creativity of my art, really think about it, instead of just being in rehab mode. The helplessness of 2020 in the community, it was really heavy for everyone, but it got me exploring different fields, different directions on where I might want to go. I started youth work training before the accident and am currently working on a degree in Community Health. It all connects with what I’m passionate about. It’s like collecting different pieces of the puzzle and reframing your work… exploring where you want to grow. It feels right.”

For the Ebb+Flow workshops, Crystal coached a group of mixed aged of students from the local dance troupe, Glitz, in Acro training, and facilitated a series of in-school workshops with hula hoops. These workshops were also used to help create an original collaborative work with the community for her contribution to the Ebb+Flow Exhibition. Wanting to try something different, Crystal explored the use of hula hoops with rainbow-coloured paint and worked with local children and large sheets of calico to capture the movement of circus. 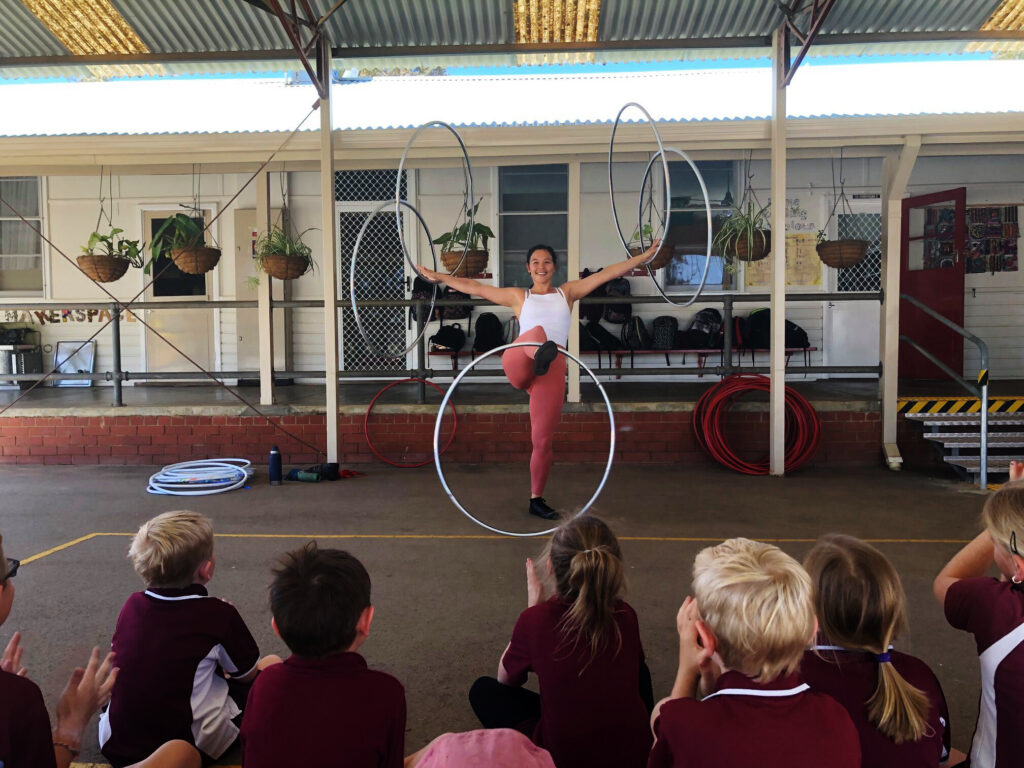 “It was great to work in the community… And it was incredible how the residency shed light on how important it is to just have time and space to explore. But I did struggle with how to capture a piece for the exhibition. How do I incorporate the community element other than video recording it…? For me, it boiled down to… Circus is joy and hardship shared. Every movement leaves a trail. So make them count and lead the way. I wanted to capture that. Inspire the kids to think about wherever you go, see your trail. Make your mark. Lead the way. So, we rolled the painted hoops across the calico, in different ways.”

And where are you at with everything now?

“I’m contently grounded… especially compared to two years ago Crystal. I currently continue to be giving back at Broome’s local Sandfly Circus, which gave me my start in life. I teach ages 5 to adult, all things Circus. I’ll be preparing for the next development of the Natural Wings Production, She is Strong, returning to Perth Fringe in January 2022. And will continue working through my university studies.”

A relationship between two people where the individual with more experience, knowledge, and connections can pass along what they have learned to a more junior individual within a certain field.

A condition of life that causes difficulty or suffering.