Zest Fest looks back on a history of emotions

When it comes to finding a partner for your community arts event an academic research team might not be your first go-to, but in Kalbarri the results speak for themselves.

If you run in regional arts circles you’ve probably heard of Zest Fest. It brought to life the amazing stories of the Kalbarri coast’s past; tales of shipwrecks, survival, homesickness and shared culture, in an incredible combination of work from local and international performers, artists and storytellers.

Directed by Rebecca Millar of the Kalbarri Development Association, the Festival was born from bubbling community interest in the 300-year anniversary of the Zuytdorp wreck – a Dutch ship which ran aground between Kalbarri and Shark bay in 1712. 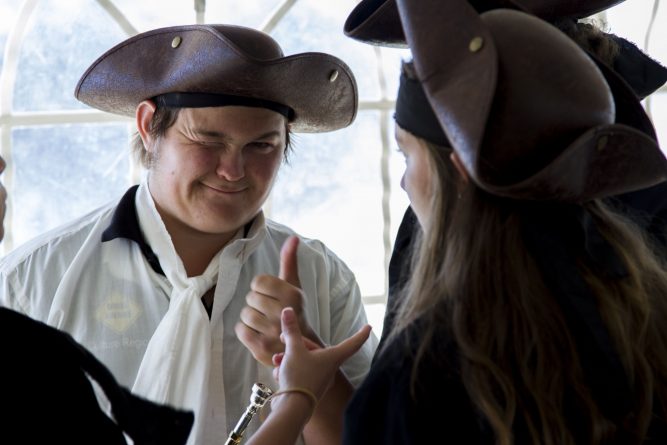 Brearley Mitchell as part of the Kalbarri Comedy Crew for Zest Fest.

Rebecca explained the Australian Research Centre of Excellence for the History of Emotions (or for short, the CHE) contacted Kalbarri Development Association to talk about creating a festival-cross-research-project to look at the way history impacted the emotions of modern day Australians.

Headquartered in UWA and armed with $24 million in funding over 7 years, the CHE was tasked with uncovering how the emotional landscape of the past influences (and is still shared by) modern Australia. Their tool of choice for measuring that impact would be the Zest Fest itself.

“We were looking at diaries, music, court records – we would look at those and use them an inspiration for different parts of the festival,” Rebecca said.

For artists in the community the historic images and text provided by the CHE lead to the creation of the Still Life/Our Life exhibition in 2012, which saw local Kalbarri work on display next to 17th century Dutch artefacts and paintings from the US National Gallery of Art.

At Country Arts WA we were delighted to see some incredible work at the Festival from the folks Northampton Old School – who receive funding from our Core Arts Fund, supported by the State Government through the Department of Local Government, Sport and Cultural Industries and Lotterywest.

The young performers of the Kalbarri Comedy Crew, supported by Country Arts WA’s Drug Aware YCulture Regional grant, gave the historic tales in those diaries a humorous spin (you can read about the experience of one crew member, Grace Corgan, here).

Rebecca also pointed to the collaboration between international orchestral and vocal performers, as they came together with local musicians to share local stories.

“Having that combination of local artists, regional artists and international artists – it’s bringing those all together – it’s not just bringing something from somewhere else in and all watching it, everything we did had local content that was created here.

“The aim was to get this incredible cultural content that was normally just within the realm of historians and make it come alive for everyone.

“We wanted to explore what that actually meant and the connections that ship made with the rest of the world, as well as how the Nhanda people helped shipwreck survivors.”

More than half of the 1,000 or so people living in Kalbarri got involved with Zest Fest, but Rebecca said it was the local school kids who got the most out of the research – as their everyday classes were bolstered with resources created by CHE as part of their research.

Research teams getting heavily involved in the boots-on-the-ground aspect of community projects is still quite rare, according to CHE Zest Fest Project Officer Elizabeth Reid, but it’s something the Australian Research Council is looking to make much more common.

“The Zest Festival sought, not only to understand the ways that the contemporary world is shaped by its history, but also to create opportunities to explore history in a way that actively contributes to modern identities through meaningful experiences… The project has provided a new perspective to current debate on heritage, emotions, and public pedagogy.”

While work on the Festival has wrapped up on Kalbarri Development Association’s end, the cultural capacity building achieved through the Festival continues to create inspiring new work.

Rebecca is currently working with the local Nhanda people on a project which will create performance art from more than 300 different stories, which were shared and crafted into message sticks.

Other members of the community have found inspiration to start a drama club, with a new interest in the dramatic arts from many Kalbarri students who participated in Zest Fest. Rebecca is also on the lookout for pitches from filmmakers which would allow the local community to share their stories of life in Kalbarri in a semi-scripted combination of documentary and fiction.

The CHE’s research won them the 2017 CHASS Australia Prize for Distinctive Work in the Humanities, Arts and Social Sciences. They are currently using what they learnt in Kalbarri to write a book on the intellectual and social benefits of partnering with communities for this kind of hands-on-research, so with any luck, we can look forward to a few more Zest Fest-like successes in regional WA in the years to come.

If you are interested in drawing on some of the CHE’s research for a project of your own, you can find all of the Centre’s education resources right here.