This project was delivered with the help of Drug Aware YCulture Regional. If you are aged 12-26, living in regional WA, and are interested in delivering an arts project in your community, get in touch today to find out how!

What happens when you mix a passion for skateboarding with a love of art? For young creative Rudy Selmes and The Concrete Club, the two are simply intertwined – and what better way to share those passions with the community, than through a project demonstrating the best of both worlds!

With support from a Drug Aware YCulture Regional grant, Rudy’s Skate Screen Workshop – Presented by Drug Aware – was held over the summer school holidays at the Margaret River Youth Precinct. The project brought together people of all ages, successfully activating the community space, and celebrating youth culture.

Running such a large project could have been a daunting experience for Rudy, but he didn’t have to go into it alone. Instead, he teamed up with friend and fellow artist Wirra Thompson and the two young project coordinators got extra help from their auspice, The Concrete Club.

Partnering with The Concrete Club was a match made in heaven for Rudy, a talented skater and artist. Based in Margaret River, the local not-for-profit offer early intervention skate programs with a focus on mental health recovery. Having only been in operation for 12 months, the program has blossomed to offer a huge variety of workshops and programs that focus on skate ethics and the DIY nature of skate culture.

Some past workshops have included puppetry, roller dance, visual arts, videography, photography, and skate ramp building. In December, The Concrete Club even offered a skate camp, where 18 young people had the opportunity to participate in a skate tour and enter the Soggybones Battle of the Bay Skate competition.

“We run programs with lots of crossovers where we can push the boundaries in Margaret River and say, ‘That’s one area of interest, but how can we bring in more community engagement and make a bigger and better thing out of this?’”
– Sky River

Jacque Ashworth and Sky River, the brains behind The Concrete Club, bring together a passion for art and skate as well as a wealth of knowledge in the community sector. As a Youth Worker, Jacque felt there was a gap to be filled in their community when it came to programming that actively engaged young people. Using her background working with young people who have childhood trauma, Jacque explains she saw real mental health and healing benefits to skateboarding.

“One of the magical things about learning to skate, is that the part of the brain you use is the same part you use when recovering from childhood trauma. … (Skating) teaches a whole bunch of stuff. With skate park etiquette you learn how to read body language: When is it your turn? When is it safe to skate? All that sort of stuff is really valuable for young people who missed out on those cues when they were younger because of trauma.”
– Jacque Ashworth

Alongside some exciting programs The Concrete Club also offer an outreach program at The Zone Room, attached to the skate park. It is here that Rudy was already spending most of his free time cruising on his skateboard… Although, as Jacque and Sky point out, by ‘cruising on his skateboard’ Rudy really means, ‘putting in a dedicated 12 hours of practice a day.’

Having emersed himself in skate culture, Rudy has long dreamed of starting his own skate clothing label and had been actively trying his hand at screen printing for a couple of years.

Running their very own arts project meant Rudy and his friend Wirra could develop and share their skills in screen printing and project management. For Rudy, the experience was invaluable. He was able to learn how to set up his future business, get an Australian Business Number (ABN) and apply for a Tax File Number (TFN). The grant also enabled him to work with established local artist Francesco Geronazzo which meant Rudy was even able to learn easier ways to screen print his work for sale!

“When I first got into screen printing, I made about 20 of these owl T-Shirts and I had to individually cut out every little design. I didn’t even know about emulsification at that time – the chemical process to do to that for me.”
– Rudy Selmes

Rudy first became acquainted with Francesco after attending one of the artist’s printmaking workshops. So, when Rudy decided to run his own screen printing workshop, asking the artist to help seemed like the logical choice. Meanwhile, Francesco was also looking for ways to engage with the community – so the artist was more than happy to jump on board. 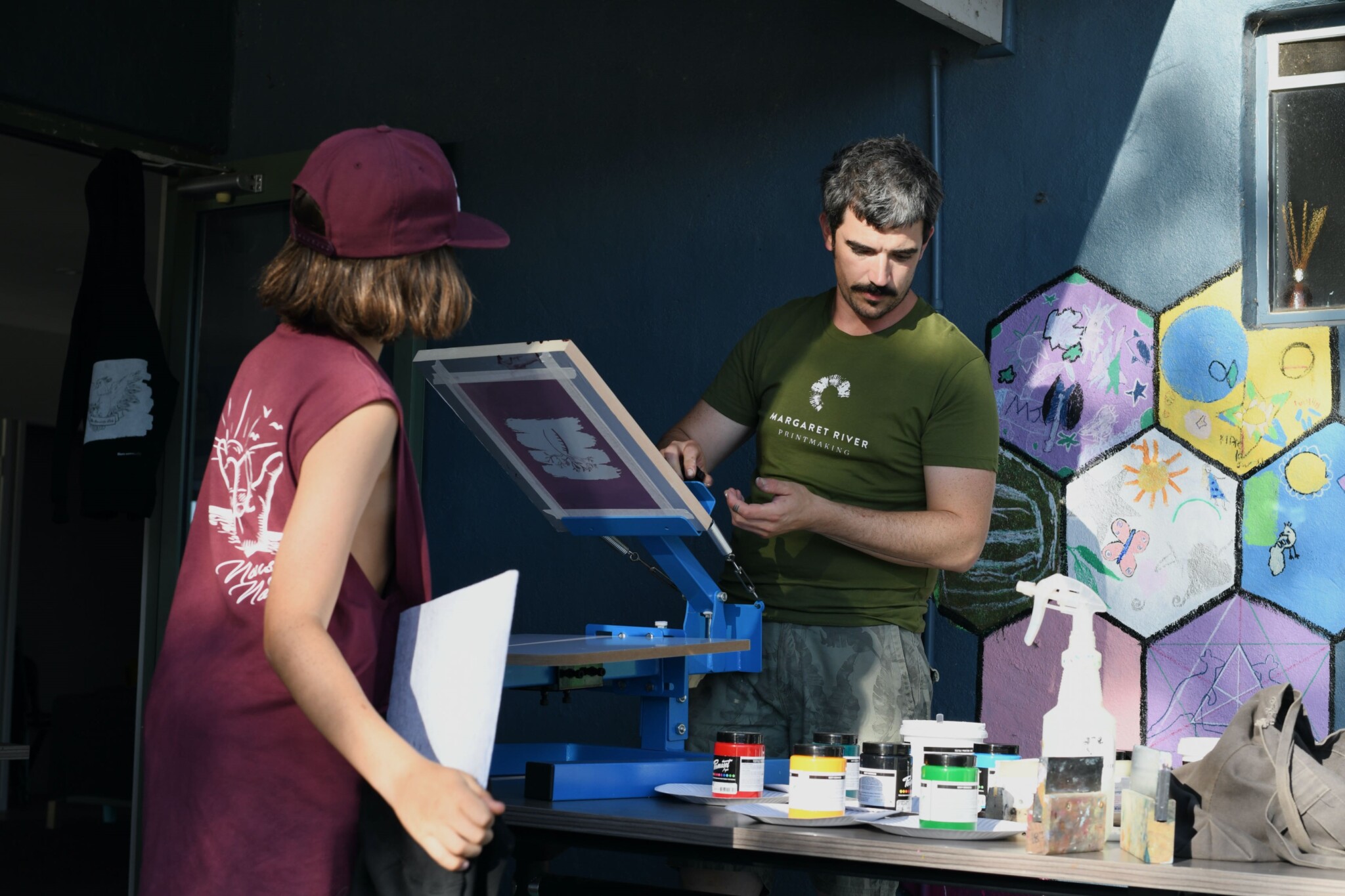 Rudy’s Skate Screen Workshop was originally envisaged to be a smaller project held within The Zone Room, encouraging young people to come in and try their hand at screen printing with the experts. But, when COVID-19 restrictions hit the Margaret River community, plans were forced to change.

Thinking on their feet, the group moved the workshop outdoors into what ended up being a much more community-orientated space. This meant that the small number of people they expected to be working with grew to almost 40 participants, including whole families getting involved.

Having underestimated the actual attendance, the group began to run out of T-Shirts and fabric patches to screen print. This didn’t seem to bother anyone, though, as kids started screen printing multiple designs onto each T-Shirts and parents ran home to get more blank T-Shirts for themselves. Others even opted to use the shirts off their own backs. 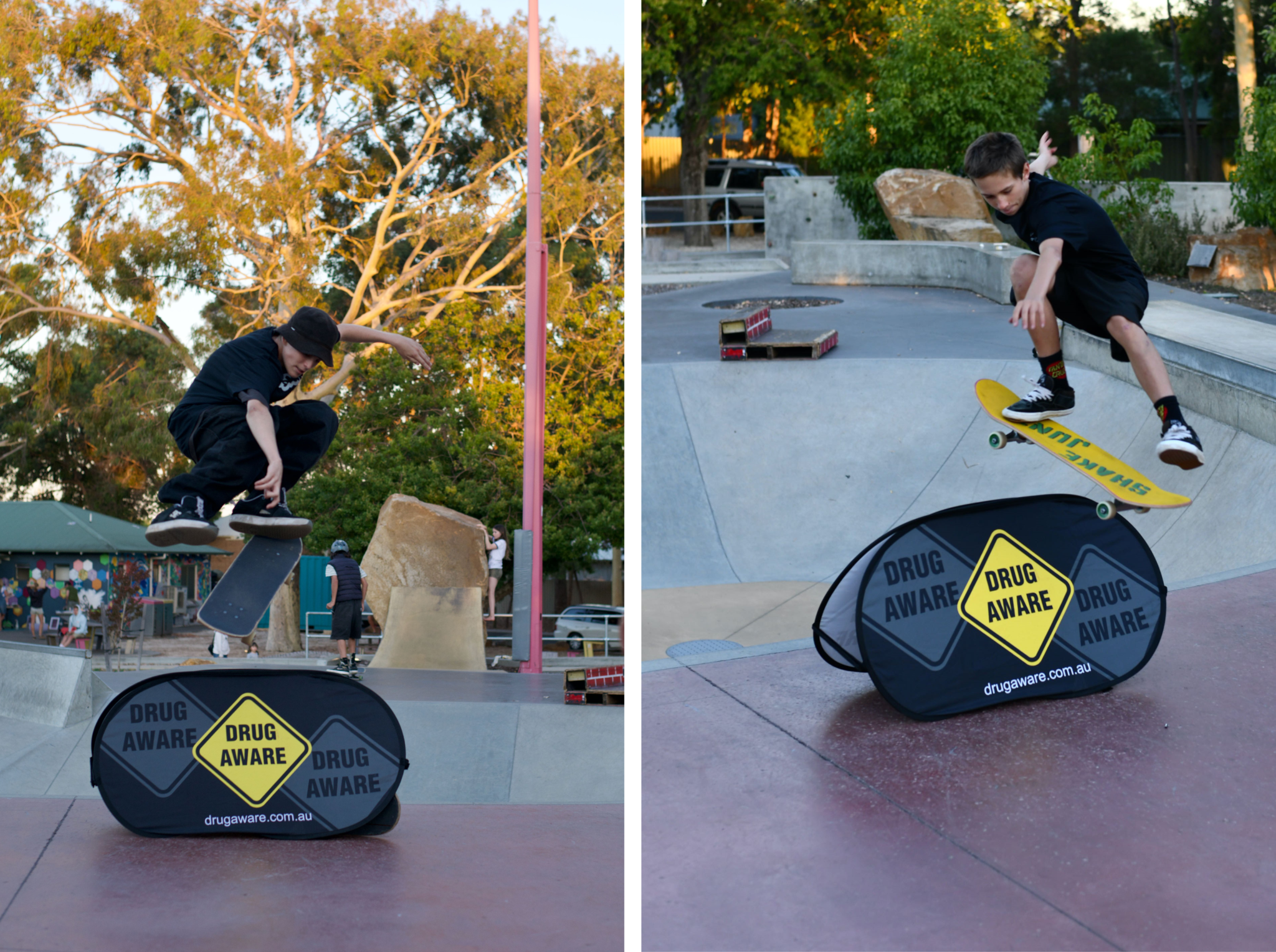 During a four-hour frenzy, the line to have Rudy and Wirra’s designs screen printed onto T-Shirts just kept growing. Skate clip videos were played to keep the crowd entertained, and healthy food options were provided to energise the crew as they took to the skate park.

Rudy’s Skate Printing Workshop was a huge success, and The Concrete Club are now planning to re-engage Francesco for future workshops. He has already begun modifying screens to fit the curvature of a skateboard with plans to screen print designs onto individual boards for the boys to ride.

When asking Rudy if he would recommend others give themselves a shot by applying for the Drug Aware YCulture Regional and running their own projects, his reply was simple.

“Do it. Just try it out and see for yourself.”
– Rudy Selmes

Drug Aware YCulture Regional is funded by Healthway to promote the Drug Aware message: Look after your friends! To find out how visit www.drugaware.com.au
Share