… just another day at the Country Arts WA office!

When we have the chance to venture out into regional WA to meet our Shows on the Go presenters face to face, it is taken with relish. It’s an opportunity to experience firsthand the result of endless hours desk bound coordinating a tour. It makes it real, and this is what life is about!

Weng-Si Cheang, our Marketing and PR Manager and I flew east to Kalgoorlie to meet with Artgold, Goldfields Arts Centre, Calypso Designs and City of Kalgoorlie-Boulder, in a whirlwind afternoon of meetings. This was Weng-Si’s first fieldtrip as a new Country Arts WA employee and a great introduction to our current Focus Region. 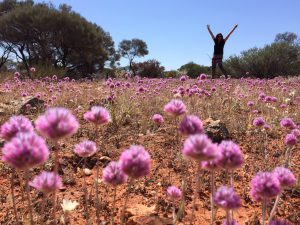 Me and the wildflowers

The following day we drove 514kms to Sandstone, which reinforced just how MASSIVE this state is and the tyranny of distance faced by locals and travellers.  The landscape dotted with colourful wildflowers flickered by, as Celine Dion songs were sung at the top of our lungs, while we observed slow-to-budge eagles feasting on the delicacies that regional roads deliver.

When we arrived, it was wonderful to meet up with the cast and crew of Aboriginal Comedy Allstars. It was just over the half-way point in their WA tour and the stories exchanged were thoroughly entertaining. Dane Simpson, one of the comedians summed it up best in a message to me that read ‘I’m having such a fantastic time!!! Thank you for getting us on board. This is genuinely one of the greatest experiences of my life.’

Each performance in a Shows on the Go tour takes on a life of its own, depending on the community. Sandstone’s event would have to be a highlight in my six year career as a touring officer. With a population of 40 permanent residents, and an attendance figure of 31, it was a mean feat. The audience was made up of locals and curious tourists that ventured out from their comfy caravans at the nearby park. 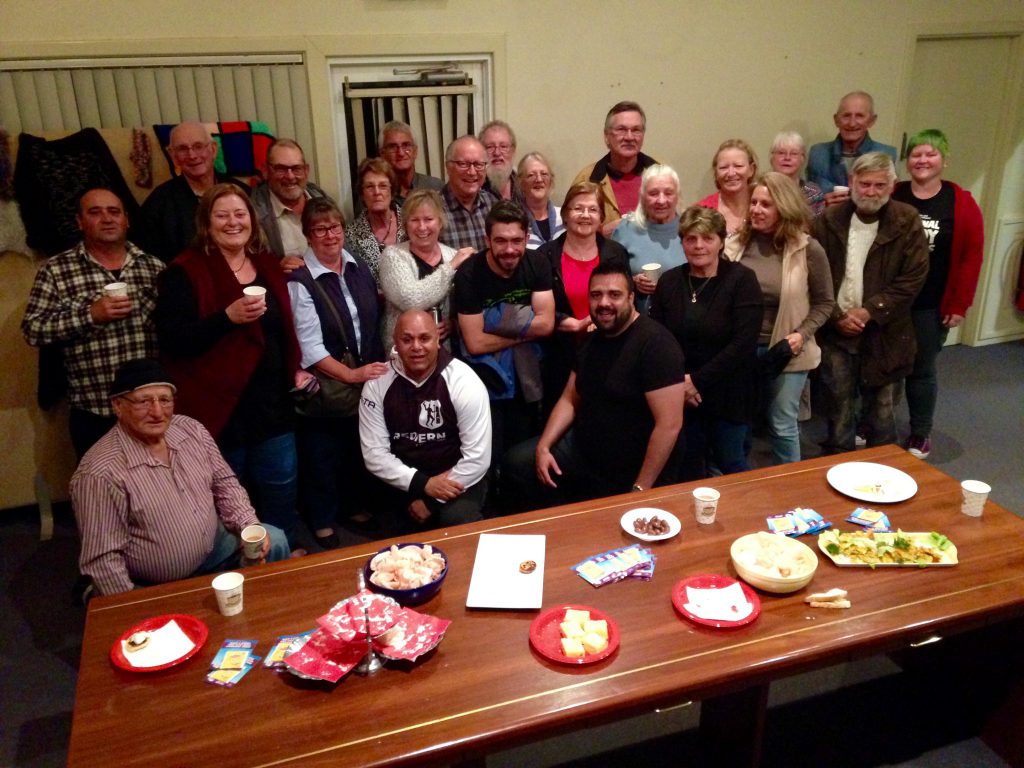 Sandstone supper with the locals

The post-show supper was a cosy treat for all the punters who laughed themselves silly watching Kevin Kropinyeri, Dane Simpson and Matt Ford’s stand-up. The opportunity for touring artists to mingle with community members over a scone and cream was pure gold. A local artist, Jim, presented the cast with a drawing of the comedians he created after meeting them the previous day. They were so touched by this gesture, which then lead to a duel of sorts over who would be the lucky owner of this special artwork. 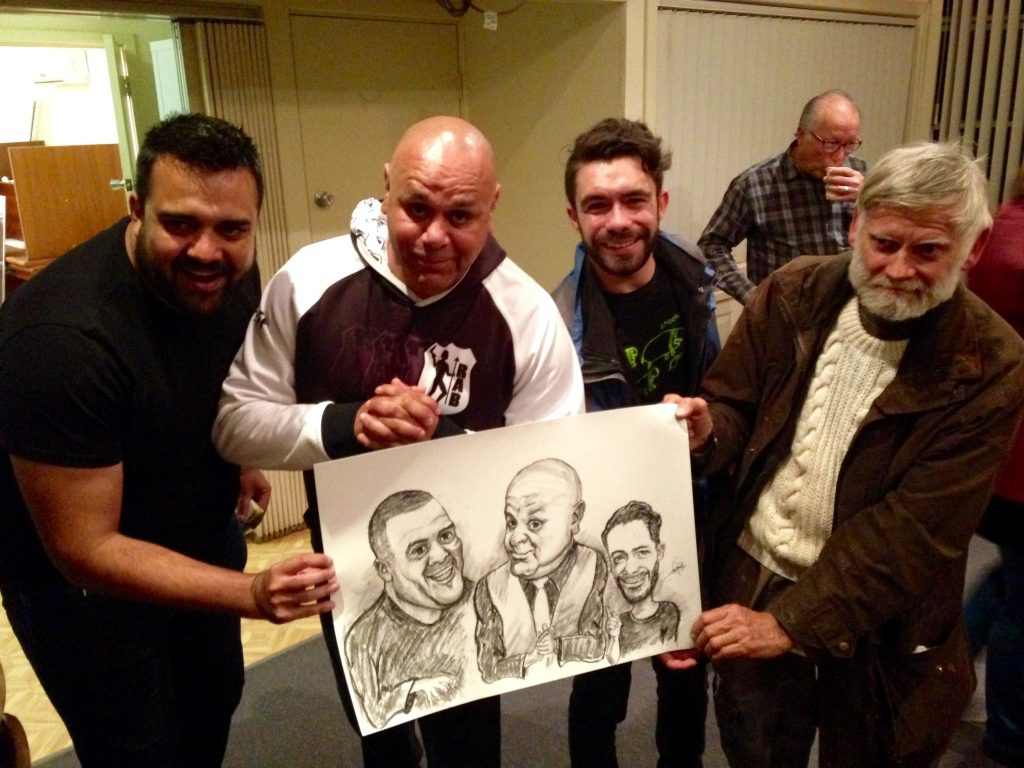 Jim, a local artist made a sketch of the Aboriginal Comedy Allstars

Our incredibly welcome stay in Sandstone gave further clout to the phrase ‘country hospitality’.  Even the only chef in town created a vegetarian meal that wasn’t on the menu, just for me. And to top it off, Donna, the local publican cranked up the karaoke machine post-show to our delight, and less so for the neighbours. Just a normal quiet Tuesday night in Sandstone!

The following day we met with Rhonda Miles and Margaret Duhig from the Shire of Sandstone, who were happy with the previous night’s event and were keen for the 2017 program.

With purple wildflowers leading the way to Leonora we looked forward to our meeting with Charlotte Huckerby from the Shire of Leonora, who was also a first time presenter of Shows on the Go.

As we entered the town we noticed the flyers and posters in a plethora of businesses. We were even encouraged to see the show by the ever-friendly girl in IGA. Over my groceries I piped up and said I was the tour coordinator and how funny the comedians were. ‘Word of mouth’ is so powerful, as I saw some fellow shoppers enjoying themselves at the performance that night. I was even approached by a caravanning couple I met in a Menzies café, a few days earlier, who scheduled their arrival in Leonora to coincide with the performance of Aboriginal Comedy Allstars, and they loved it!

We ducked out to nearby Laverton – only a mere hour and a half down the road – for meetings with the Shire of Laverton, Laverton Community Resource Centre and Laverton Leonora Cross Cultural Association (LLCCA). Touring shows have not visited in a long time and they were keen to present Shows on the Go performances in the future.

Laverton – like many a Goldfields town – has suffered a shrinking population due to a decline in mining from the ‘hey days’. It is definitely no ghost town and is far from dead, with community leaders – Graham Stanley from the Shire, Johanna McGuire from the CRC and Julie Ovans from LLCCA who are passionate about their town and what to offer their community.

We had an enjoyable peruse through the Laverton Art Gallery which resulted in the purchase of two locally made pieces of jewellery. The gallery is situated at the LLCCA, which has four mining companies and two Aboriginal corporations on the board. The not for profit organisation focuses on training and assistance for Aboriginal people to secure employment in mining and other industries.

Flying back to Perth from Kalgoorlie, I reflected on the vastness of the land we co-exist on and how blessed each moment is when you connect with another human being and how it changes you.