This story was submitted by a member of the regional arts sector: Creative Corner in Margaret River. We love sharing stories from the sector. If you want to find out how to submit your own stories, take a look at the submit your story page. We can’t wait to hear from you! 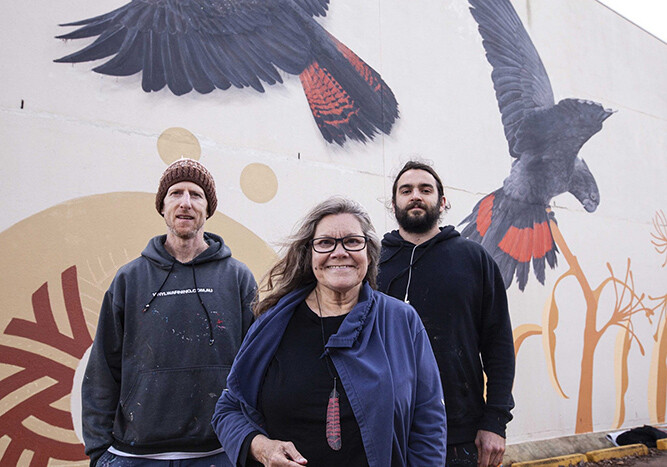 Augusta Margaret River Shire Sustainable Economy Officer, Saul Cresswell said support for the mural was part of an ongoing effort to create a sense of place and add to the vibrancy of our town centre as well as backing local artists.

“The group considered the nature and shape of the space, with most of the focus on the front half of the wall that is highly visible from the street.

“The collaboration involves each artist focusing on their specialty.

“I’d like to thank the artists and also Creative Corner for their role in facilitating this piece of art,” he said.

Indigenous icons are positioned lower down so that they are ‘grounded’ and not represented in the sky, and the mural especially focuses on the symbolism of Red-Tailed Black Cockatoos.

Ian Mutch has drawn on his expertise in painting photo-realistic birds to add a second Cockatoo to the first one that appeared on the wall in early July. 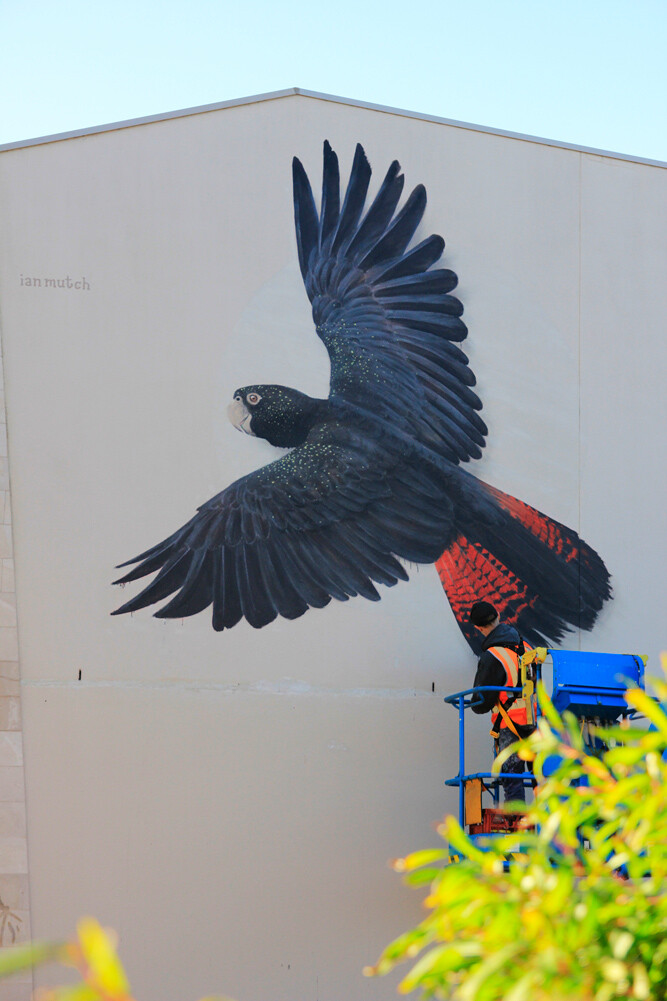 Picture courtesy of The Creative Corner.

Mr Mutch said he often paints birds, which were suited to outdoor murals.

“They are uplifting and provide much energy to an artwork, especially in a public outdoor space.

“Forest Red-tailed Black Cockatoos are native to the South-West and provide a sense of place, belonging and cultural significance,” he said.

Award-winning Wadandi artist, Sandra Hill, describes the icons in her design featuring a strong red line on the corner of the building that runs from top to bottom.

“This line symbolises the blood line of family all the way back to the creation story of the Margaret River (place of Wooditch).

“This red blood line runs through our country.  The creation of Wooditjup (Margaret River) is an ancient story that has been told by our people long before colonisation and the River is a fully registered and very important Aboriginal site.

“The patterns in the middle circle are our traditional markings on our shields.

“The ochre dots on the outside symbolise our family clan groups,” she said. 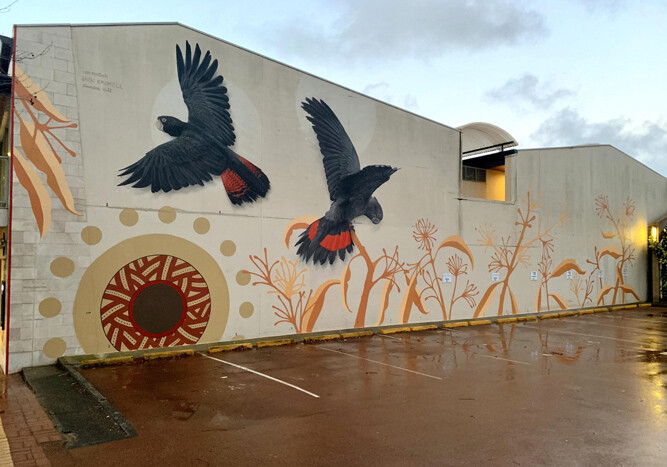 WA-based artist, Jack Bromell who has painted a number of local murals illustrated Marri branches with leaves and flowers to complement the Red-Tailed Black Cockatoos and the Indigenous symbology from Sandra.

“The Marri tree (Corymbia calophylla) is a species native to the South West, whose name derives from the local Noongar language.

“Red-Tails can frequently be found perched amongst Marri branches feeding on nuts and flowers, which are an important food source for native bird species.

“Painting Marri in the mural highlights a sense of place through connection with native wildlife and ancient culture,” he said.

Look forward to more great work from these artists, who are all busily working on various projects both locally and beyond the South West!