Ridges, riffs and rings of fire: a field trip to the Pilbara

The first thing you notice about the desert is the green. On our field trip earlier this month, Country Arts WA’s Investment Officer, Monique Boucher, and myself expected endless flats of arid red landscape where people live and work in spite of a difficult environment. Instead we found a vibrant spectrum of colour and topography – pink sunsets and verdant hills in all shades of green, contrasting with burnt orange ridges and big blue skies.

Our timing lined up with the Pilbara shows of A Boy Named Cash, the second tour in 2018’s Shows on the Go program that sees Monty Cotton take his one-man Johnny Cash tribute show all over the state. It’s a shame we weren’t able to make it in time for the Paraburdoo show, where performer Gemma opened proceedings with what was said to be a stunning set, alongside some powerful duets with Monty. Gemma was the second of several mentees on this tour’s Local Talent Mentorship program, that sees Monty spend time helping performers in regional communities hone their songwriting and performance skills. Gemma has a unique passion for music and authenticity – in fact, she moved from Sydney to the Pilbara to get a feel for what it’s like living in the remote parts of this country. I can’t think of many musicians more devoted to capturing a feeling. 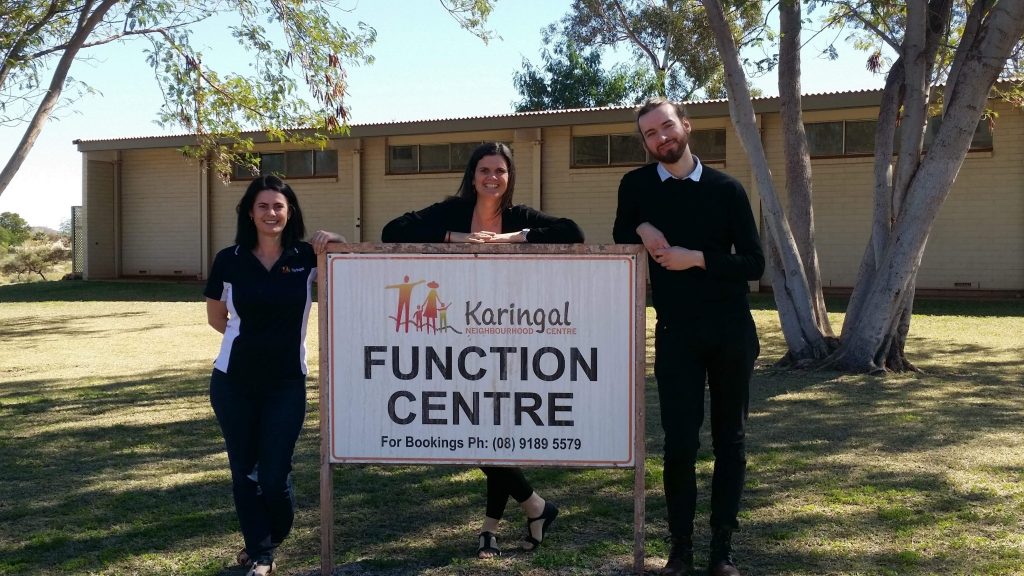 The morning after flying in, Monique and I met with Miranda at her staff at the Karingal Neighbourhood Centre. Like a lot of organisations in regional communities, Karingal Neighbourhood Centre’s work extends far beyond what the word “neighbourhood” might imply – they run an op shop, offer Centrelink services, operate as a CRC, coordinate social events, promote arts events (they’ve been a longtime Shows on the Go presenter), run workshops, and probably a whole lot more things that we didn’t even get the chance to talk about. They were the presenter responsible for running A Boy Named Cash, and they’ll be presenting another show in Paraburdoo this October called Great Danes.

Later that morning we spoke with Sarah Johnston, the Strategic Partnership Manager at the Shire of Ashburton – the local Shire that manages the central/western Pilbara region, servicing the four main towns – Paraburdoo, Tom Price, Pannawonica and Onslow – as well as the smaller remote communities in between. There’s a high population turnover in the Pilbara – whether you’re in local government, mining, education or social services, a lot of people move to the area for a few years and leave shortly after. That makes community-building a difficult task, but Sarah’s the exception to the rule: she’s been in the area for eight years, and she was a fountain of knowledge and wisdom about what it’s like living and working in the Pilbara.

The drive from Paraburdoo to Tom Price blew our preconceived notions of the Pilbara landscape out the water. Yes, it’s red, and yes, it’s harsh, but with wave after wave of vibrant green. Flood warning signs seem jarring at first – how could a landscape so vast be submerged? – but as we came to see the distant ridges converge and envelope the main road as we crossed over a creek, we understood. 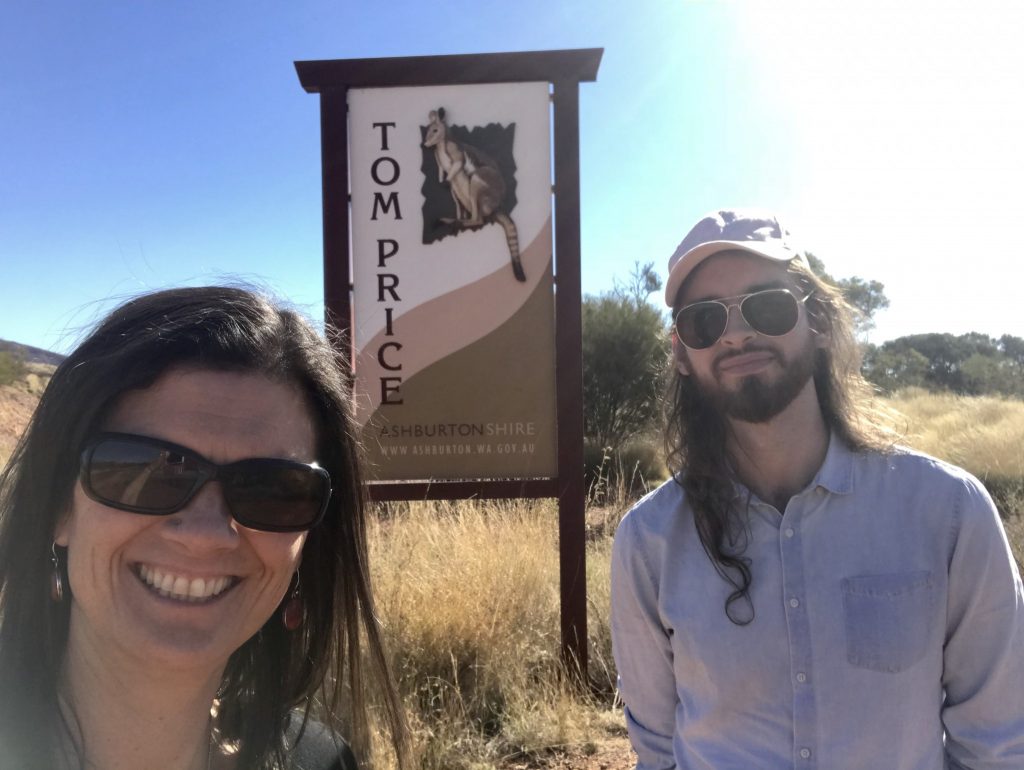 Tom Price is a little over double the population of Paraburdoo – there are around 4,000 residents and another 1,000 working fly-in fly-out. It’s home to a high school, and the main office for the Shire of Ashburton. We arrived at the Ashburton Hall for that evening’s A Boy Named Cash performance and, after a catch-up with the tour manager and tech, took our seats.

The crowd was about as diverse as could be – there were a few parents with teenage children, couples, Cash fanatics flying solo, alongside a few folks old enough to remember when At Folsom Prison came out in 1968. And they were surely entranced – from the first note, Monty Cotton is a consummate showman and an enchanting entertainer. His Cash impersonation is spot-on, treating the material with a mix of earnest reverence and playful enthusiasm that’s enough to convert Cash newcomers and acolytes alike. 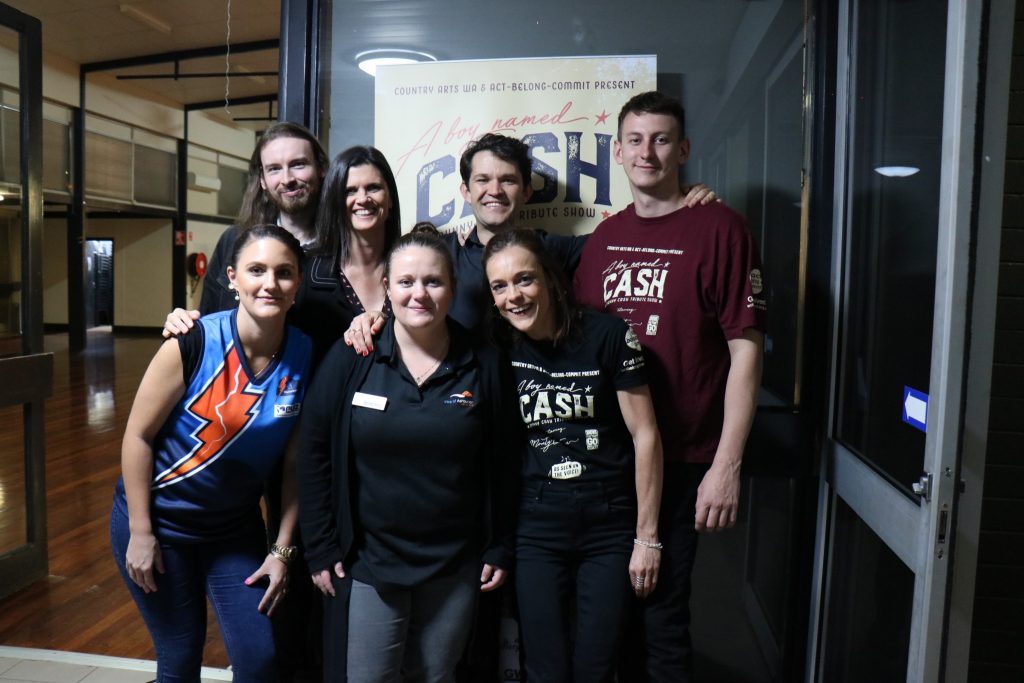 The morning after the show, we met with Sharmayne Halliday, the Acting Community Services Manager, at the Shire of Ashburton office and spoke with staff from Onslow and Pannawonica via teleconference. The Shire manages over 100,000 square kilometres, and the drive between Onslow on the coast, and Tom Price, its administrative centre and easternmost township, is over five hours. It’s a credit to the Shire and organisations within the area that there’s a palpable sense of community in Tom Price – given the isolation and distance, that’s no easy feat. 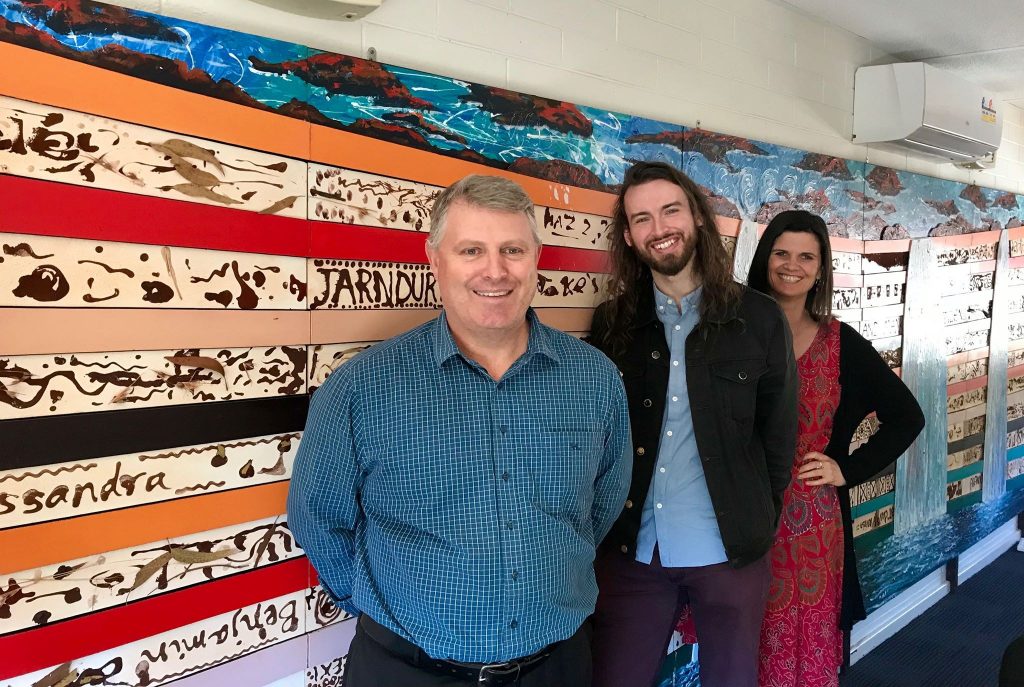 One of the major organisations contributing towards that feeling of community is the Nintirri Centre. We met with James, the organisation’s CEO (and a Board member at Country Arts WA, and Brie Healy, the Regional Arts Hubs Officer to talk funding, presenting and life in the Pilbara. Nintirri is far more than just a community organisation – the organisation employs over 35 staff (and even more since taking over a cafe, The Pickled Bean, just after we left) and offers an arts program (including presenting Shows on the Go), family and domestic violence prevention services, childcare, healthcare services, functions as a community resource centre and they coordinate the Karijini Experience every April. It’s a remarkably broad remit but one that the organisation seems to be fulfilling well – wherever we went in the Pilbara, people had glowing things to say about James and the organisation. Judging by James and Brie’s enthusiasm in our conversation, there’s a good chance that summary of activities will be outdated in six months.

After meeting with Nintirri it was a three-hour drive to Newman – though we couldn’t do it without a quick stop to the stunning Karijini National Park, where we ventured into a spectacular gorge and saw the full spectrum of colour contrast that the Pilbara has to offer.

Upon arriving to Newman we dined with the A Boy Named Cash crew in the evening ahead of the next day’s show, then met with Amy Mukherjee at Martumili, an Aboriginal arts centre working with the Martu people of the Western desert. The Martu people are the traditional owners of a huge swathe of land covering Great Sandy, Little Sandy and Gibson Deserts, with Newman at the southwestern corner of that land. Martumili base themselves and their gallery in Newman, but much of the organisation’s efforts are devoted to working with people in remote communities in Martu country; they employ two outreach officers who spend most of their time on country within community. 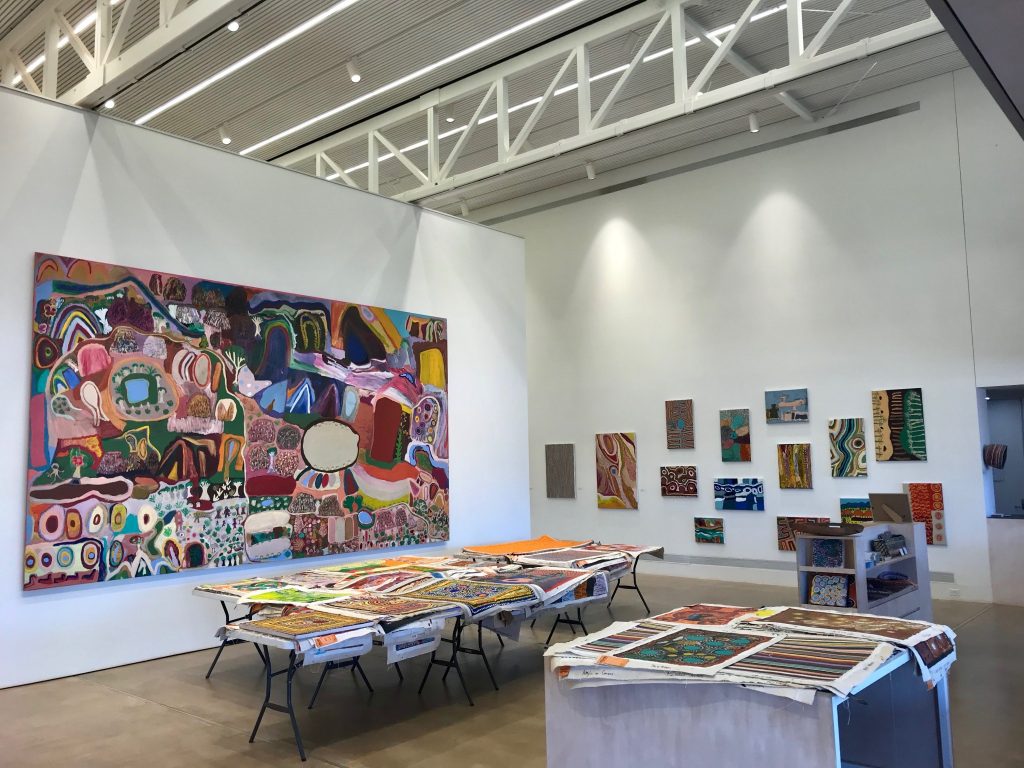 In addition to the gallery space, Martumili is home to a studio where artists have access to all the materials they need to paint. Some artists live in Newman and treat it as a full-time job; others will spend a few days in the studio as they pass through town. We were privileged enough to spend time speaking with May, an artist originally from Jigalong who was working on a piece depicting a mountain range where she grew up. 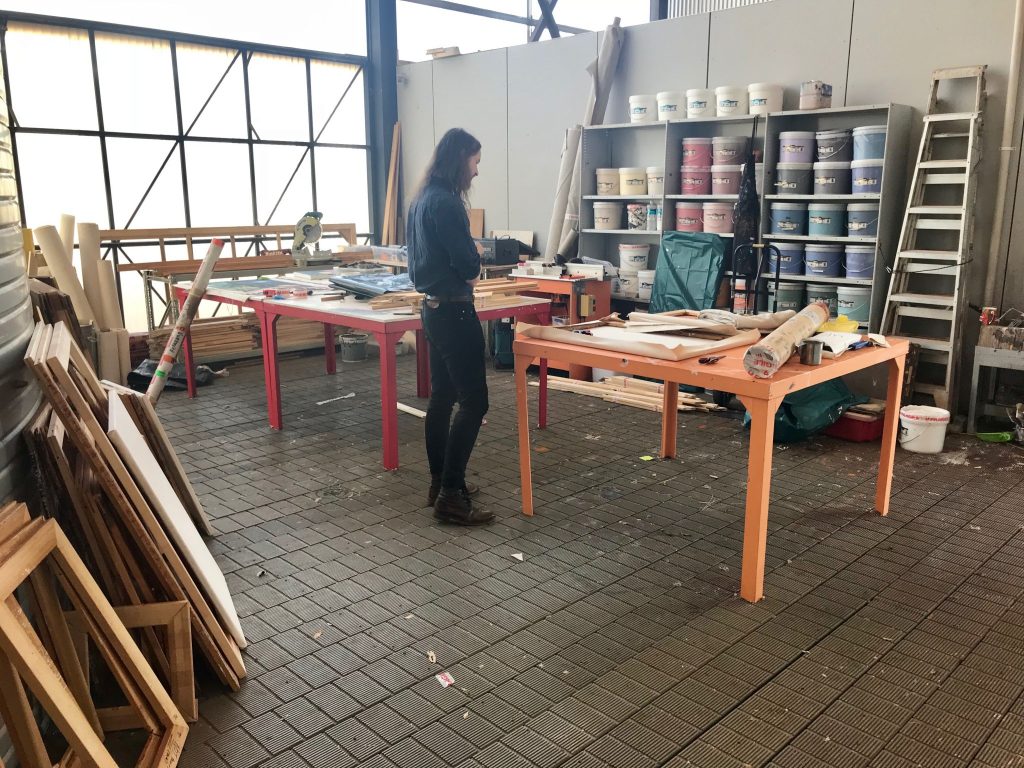 After Martumili we met with three of Newman’s main arts organisations – the Shire of East Pilbara, the Newman Chamber of Commerce and Red Desert Events (formerly Newman Main Street). It’s refreshing – and essential – to see community and arts organisations working collaboratively in regional communities. All three organisations have been involved with our Shows on the Go program in the past, as well as arts events in their own time – the most ambitious of which happens at the end of August with their five-day Outback Fusion Festival. 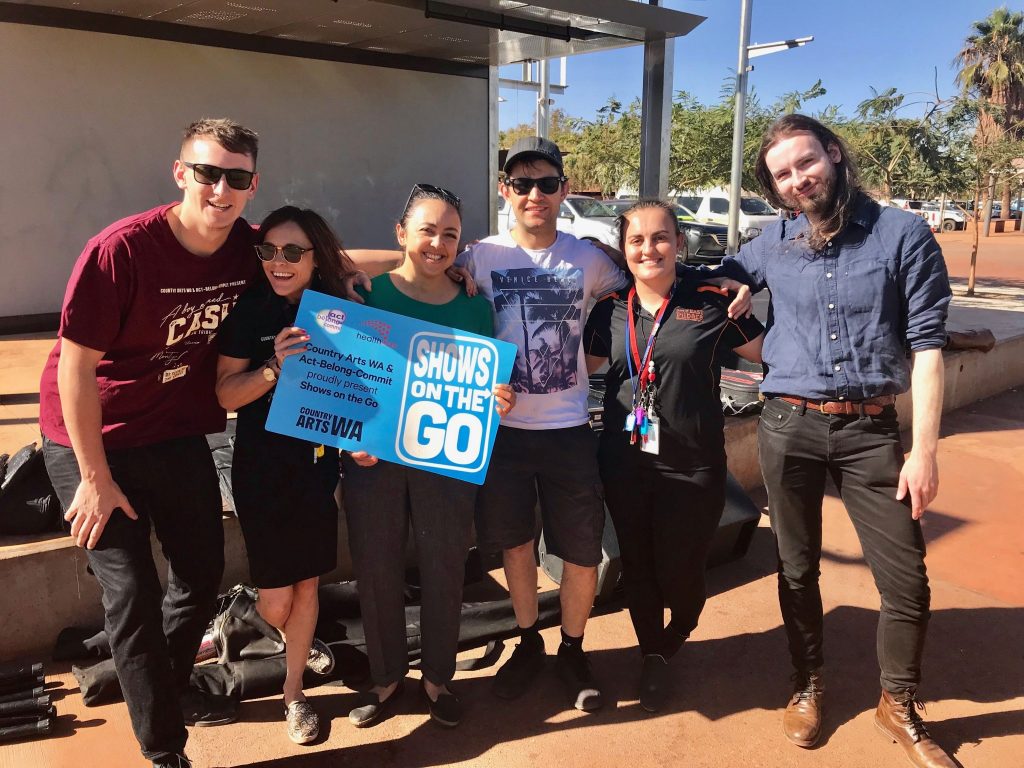 We helped the A Boy Named Cash crew as they set up for the evening’s at The Square – an outdoor events space in the centre of town – and met with the mentee, Josh, a 17-year old guitarist who opened the evening’s proceedings. We had to leave to catch our flight and so we missed out on the show, but left with a wealth of understanding and a strong appreciation for the challenges and rewards of working with arts in the Pilbara. I can’t wait to head back.