This story was submitted by a member of the regional arts sector: Christopher Young. We love sharing stories from the sector. If you want to find out how to submit your own stories, take a look at the submit your story page. We can’t wait to hear from you!

For the most part I feel clumsy and foolish trying to collate words and images, or talk to groups of people. This awareness of effort highlights to me my inability to offer something truly unique or innovative or scary.

All I can proffer as an artist, as most people for that matter, is my experience – both personal and creative – and it is almost always offered for selfish purposes.

I suppose this could be a story of perseverance or the power of stubbornness. It might even be a tale of how cutting close to the bone comes with big risks but equally big rewards. 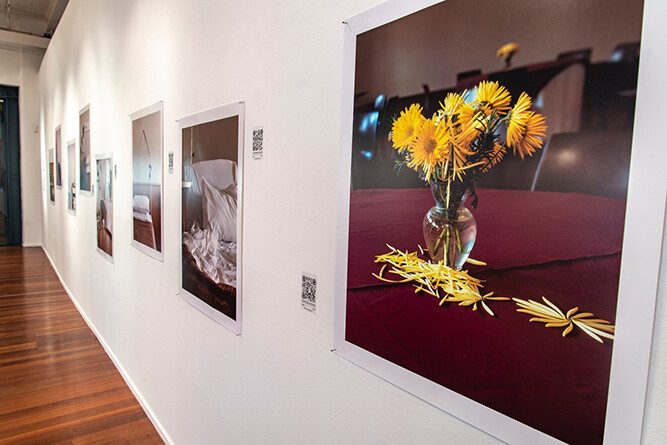 “Eight: The Shift” on exhibition at Perth Centre for Photography. Picture by Christopher Young.

In 2015, Elisa Markes-Young and I made the decision to abandon Perth out of frustration – we termed it ‘surrender’ – and move full-time to Margaret River. That change has had a huge effect on our creative practices and we have relished the opportunity to reestablish ourselves in a new community.

In 2018, I was lucky enough to get some funding from Regional Arts WA and this allowed me to not only realise a significant project but also to take creative risks. Regional Arts WA have been immensely supportive and were forthcoming with feedback while I was writing the application.

I’m ashamed of the number of previous grant applications that I had struggled through in order to fund ‘Eight’. It amounted to months of work spread over a number of years and included countless, awkward emails asking for support letters or clarity on this or that failing.

Central to that effort was an awareness of necessity. Given the personal nature of the project, I was conscious that I needed to do this work to get on with the rest of my life. That primacy was a double-edged sword as the rejections were often felt deeply.

The chasing of funding also greatly delayed the work. I couldn’t afford to self-fund so commencement was very much constrained by funding criteria and heavily dependent on outcomes.

I wish I could offer some great insights, advice or the ‘secret codes’ to unlock funding. While two recent applications were successful, many other parallel applications to other bodies weren’t … despite them being substantially similar.

My only suggestion to artists is to embrace stubbornness. Too often artists twist their practices to fit parameters set by others. Don’t discount or abandon your ideas just because this or that institution doesn’t see ‘value’ in what you are doing.

Make the work happen and fight hard for what you want to do. 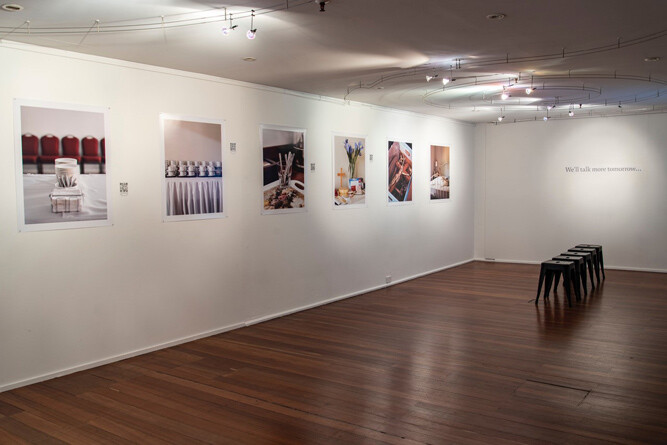 “Eight: The Shift” on exhibition at Perth Centre for Photography. Picture by Christopher Young.

For a sample of images from the exhibition, see the bottom of this story.

‘Eight: The Shift’ is a largely photographic series that looks at end-of-life cultural experiences; how people respond to such experiences; and the environments and institutions they encounter.

Utilising spaces such as hospitals, doctors’ surgeries and funeral homes across the south west, it addresses the paradox of highly-charged, emotive events in seemingly sterile and controlled spaces.

This project stems from visits to funeral homes when my father was diagnosed with a terminal illness. The ﬁrst was a macabre behind-the-scenes tour and later for his funeral. I found both experiences disturbing and thus far unique in my adult life.

“My relationship with my father was distant and often dysfunctional. Our collective apathy left us with limited shared adult experiences as well as an inability to communicate. Despite his diagnosis and the associated ‘deadline’, we never found the language to sit down to discuss his looming death.”

Despite it being inevitable, death is not something we freely discuss. It is often seen as a taboo subject, especially intergenerationally.

The series also includes anonymous interviews with people about their own end-of-life experiences and was first exhibited at the Perth Centre for Photography in 2019. A limited-edition book and website was also launched at that event.

The Bunbury Regional Art Gallery exhibition will be the second in a regional tour that also includes Margaret River and Albany.

The regional tour is supported by the Department of Local Government, Sport and Cultural Industries.

Christopher Young was born in small-town New Zealand in the mid-seventies. He grew up feeling very much out of place and desperate to see the outside world. He was frustrated by circumstance, anxiety and a lack of opportunity, struggling to fit into his immediate surrounds.

Isolation is a recurring theme in his life and work – the remoteness of growing up in semi-rural New Zealand, the loneliness of living in Germany as a poor German speaker and lately the geographic and ideological seclusion of life in Australia, have all coloured his artistic practice.

Context, coding in images and a lack of a personal cultural library have been central themes explored in his work.

He moved to Western Australia in 2002, now living and working in Margaret River.

More of his work can be viewed at www.zebra-factory.com

A selection of photographs from Eight: The Shift