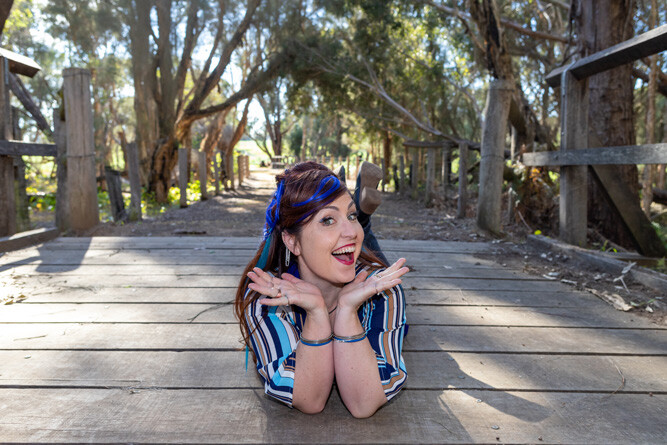 Kelea (aka Kelly Gardner). Picture by Nikki Woods of Nikki’s Photography and Hair by Jason of Frayed Knot.

From a stint on The Voice, to being featured in American financial magazine Forbes, singer songwriter Kelea has now set her sights on touring regional WA with her new band, starting with a single launch at her hometown in Gingin this October.

For Kelea (aka Kelly Gardner), her musical career began when she opted to leave the corporate world in Melbourne and move back to WA. It was an invite from her mum that sparked the move – either stay in Melbourne or live in her beach house on the coast rent-free and write lots of songs. It was a no brainer for Kelea and before she knew it, she high tailed it to Ledge Point and was creating her first single.

“I wrote “Aqua and Blue”…when I lived in the lovely coastal town of Ledge Point. I’ve tried to capture the beauty of our Indian Ocean at sunset, those inspiring colours and the so called “golden hour” of WA as you drive away from the city and up Indian Ocean Drive along the coast. It is truly a magical time of day so I simply had to put it in song. I also wrote “Evolution” there during the winter of 2017. There was a fierce storm that passed through, so I recorded its sounds as it buffeted the house and included it as a soundscape.”

Kelea grew up immersed in music, as her parents had a band and performed on weekends. Her love of the stage was evident early on, as two-year-old Kelea would enjoy running up to her parent’s stage during set up, stealing the mic and singing, to her hearts content, her rendition of Baa Baa Black Sheep. 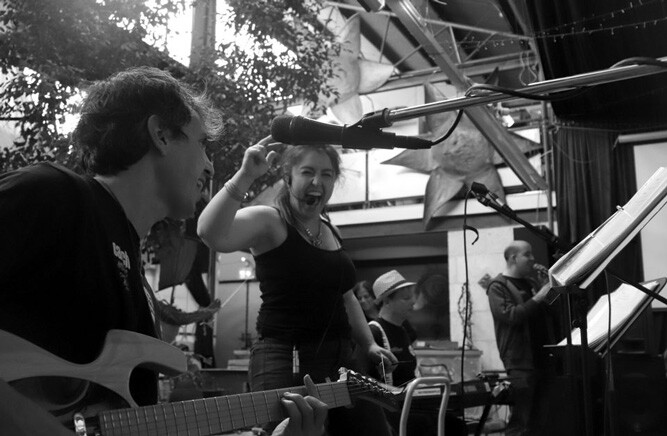 Kelea performing alongside other members of Catch Music.

In her youth she studied piano and enjoyed singing at school; however, as a good student she was encouraged to study law and commerce at the University of WA. This did not stop her passion for music and performance though.

“I remember falling asleep in the law library because I was doing music theatre or singing in bands at night.”

On her return to Perth she studied jazz vocals at WAAPA, had a regular jazz duo residency and performed with the West Australian Youth Jazz Orchestra. Her style of music has evolved over time including a mix of rock, country, folk, pop, indie, electronic dance music (EDM), jazz, and even music theatre. As a solo artist, she performs both acoustic and electronic showcases using vocals, keys, looping and harmonies. She is now taking her originals to the next level with her brand-new country rock band The Keleans.

Her thirst for knowledge and desire to grow her skills continued, as Kalea immersed herself in the world of electronic music production and subsequently self-released and self-produced her EDM-influenced athem Evolution under the tutelage of the award-winning Josh Hogan (Joni in the Moon). Kelea is also a member of Women of Music Production Perth who encourage and support women, transgender and non-binary music makers to get into the production side of electronic music. The members see it as a safe space to talk, share and learn about production and gain more confidence in recording, arranging, mixing, and mastering. 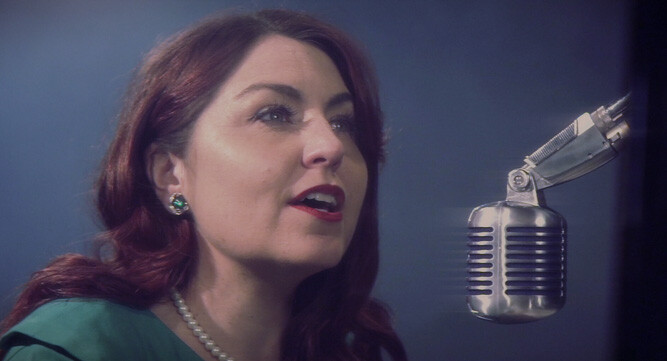 One of Kelea’s tracks – Dear Sir Madam – reached a worldwide audience when the music video (filmed at Cummins Theatre, Meredin with local actors Debbie and Kevin Tengvall) was featured by leading international anti-ageism activist/speaker Ashton Applewhite on social media. Kelea is a strong advocate for all-ages inclusivity, and believes that ageism is rife in many industries, especially the music scene. The song’s strong message attracted the eye of American web publication Next Avenue and The Big Middle podcast in the UK. It was even featured on the digital pages of prestigious financial magazine Forbes!

The song has also received acclaim at home, being nominated for WAM Song of the Year (Folk). Kelea is a member of Western Australian Music (WAM) and has been performing her original set at a huge range of regional events. She has enjoyed radio play across Australia including 94.5FM, Triple M Wheatbelt, Voice of the Avon 101.3FM and has performed live on ABC Regional and RTRFM.

Kelea is proud to be a WA artist living and working in Gingin and is often humbled by the overwhelming support she receives from her community. She believes living in regional WA has been integral to her songwriting.

“I think art is naturally informed by the environment and experience of the artist.…regional art is often informed by our surroundings – landscape, seascape, community, animals, flora, nature, regional lifestyle.

“Personally, I find country living more balanced and healthier.  For example, I sit outside in the fresh air with my laptop facing a gorgeous green paddock, there’s lovely hills in the distance, sheep and chooks wandering around and native birds flying overhead. I have consciously designed that life. In summer, my band and I rehearse on the verandah. In winter, we rehearse indoors with the fire going and the rain on the tin roof. And my amazing band members are all multi-talented people in their own right and important members of the Wheatbelt community… So naturally our regional music expresses those regional elements and regional values.”

Alongside having four different means of employment in her community, Kelea travels to Perth once a week to facilitate music sessions for Catch Music. Supported by Act-Belong-Commit and Healthway, Catch Music is an all-ages, all-abilities, all-inclusive music organisation. Even during the COVID-19 lockdown and Kelea, alongside other facilitators, conducted online lessons and a vocal workshop for participants. She thoroughly enjoys sharing her love of music with members. 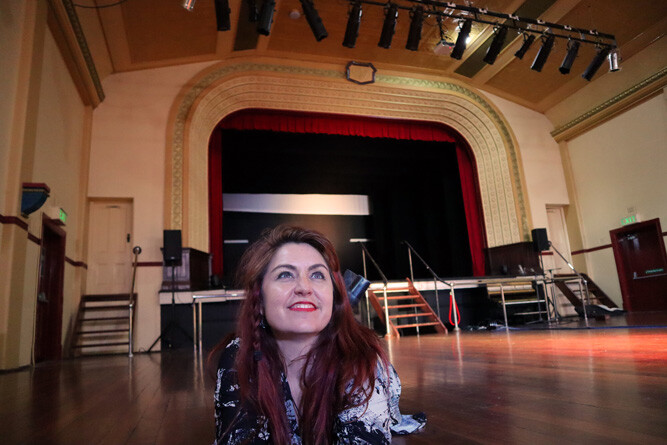 Kelea at Cummins Theatre in Merredin. Picture by Andrew Poole.

Kelea is currently gearing up to release her country rock single Sand in my Pocket on 23rd October at the Gingin Hotel, with her debut EP Of Sound Mind due to launch in early 2021. She will be performing existing and new original songs, with support from the local Gingin Singers joining her for harmonies. Kelea has also invited the local firefighters – Gingin Volunteer Fire and Rescue on stage for her track Are You Ok? which was released during the bushfires earlier this year to raise money for the firefighter organisations featured in the music video.

“After travelling extensively through the Wheatbelt and gigging during hot summer, I wrote Sand in my Pocket. I remember being broke at the time and the first rains of April came. I feel like there is a sense of “relief” that waves over the land and the people in the bush when the first rains come. It’s like we all breathe a bit easier – less risk of bushfire, crops might grow etc. That dripping down a drain pipe on the shed as it first starts – like a kick drum – the anticipation – and then here it comes – a foot stomping, song of celebration – hooray!”

Keep an eye out for Kelea’s new single release of Sand in My Pocket, save the 23rd October in the calendar and head out to the Gingin Hotel to enjoy a live performance by The Keleans. But if that’s not in your area fear not – the band is currently in the midst of planning a regional tour!

As if all that wasn’t enough, Kelea has continued to create new music and it doesn’t sound like she’ll be slowing down any time soon.

“I even wrote a track “Take My Hand” in the wake of COVID which is actually for music theatre and hasn’t been released yet as I am waiting for the right time.”

Stay tuned for that one!