Did you know only 1 in 3 million people will ever swim with a whale shark in their lifetime? Most people will never experience the exhilaration of coming face-to-face with the ocean’s gentle giants. Jess Hadden, however, is doing it daily!

Photographer and videographer Jess Hadden has been capturing otherworldly images of the ocean and its incredible megafauna for eleven years. He is turning naturally occurring patterns, like the spots on a whale shark or patterns in a clam, into incredible large-scale prints and homewares. 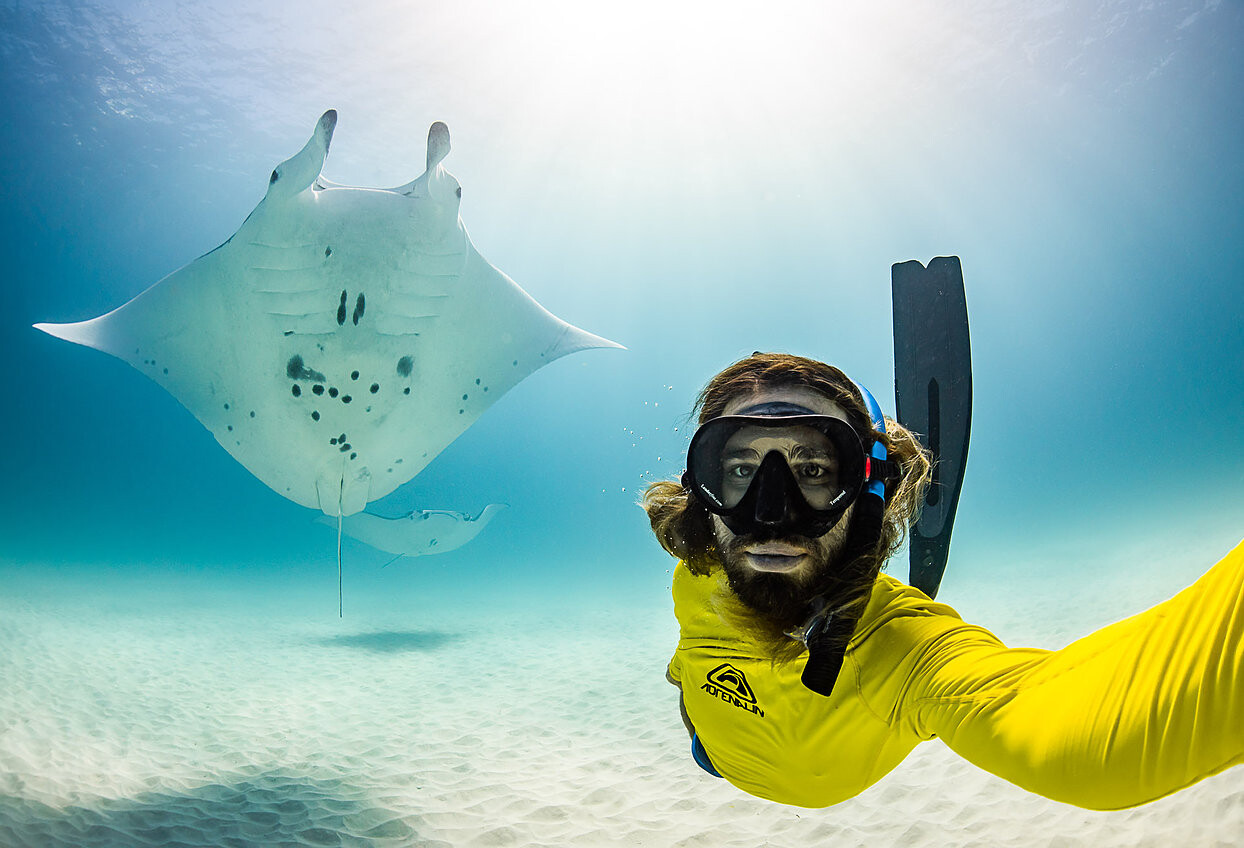 Jess swimming with a Manta Ray. Photo by Jess Hadden.

In what became a rollercoaster year, Jess collaborated with visual artist and author Sadie James in opening Gallery 6707 in March of 2020. Three weeks into signing a 12-month lease the state went into lockdown.

It was an incredibly stressful time for everyone involved, but you wouldn’t know that when talking to Jess. When he talks about life on the Ningaloo Coast, his face lights up and it’s hard not to be jealous as he passionately shares his experiences. Like the time he was bitten by a shark… sort of.

“I had a little baby leopard shark bite on to my wet suit – that was pretty cool. It just dangled there, this little 40cm shark! There have been big feeding frenzies with manta rays, humpback whales… they’re all pretty unforgettable experiences.”

While it may sound dangerous to some, Jess stresses that sharks get a bad reputation. Tiger sharks, while big, are actually incredibly lazy scavengers. You learn their behaviours, and very rarely see them display anything threatening.

Having worked for years on whale shark expeditions, Jess explains you don’t get into the water with any fear. Everything down there is already so well fed.

“Very rarely do I feel uncomfortable. I guess sometimes when it is low-visibility it feels a little bit creepy. You always wish for the nice blue water, 50-metre visibility days, but that’s not always the case. I generally always feel safe.”

A winning attitude and love of marine life has paid off. In a career highlight, Jess was shortlisted in 2019 for the Australian Geographic Nature Photographer of the Year award. His image Spot the Difference, featuring a whale shark and leopard shark swimming side by side, was exhibited in the South Australian Museum. It appeared on the cover of their calendar, in their diary, photo book and had a big spread in the Australian Geographic magazine. 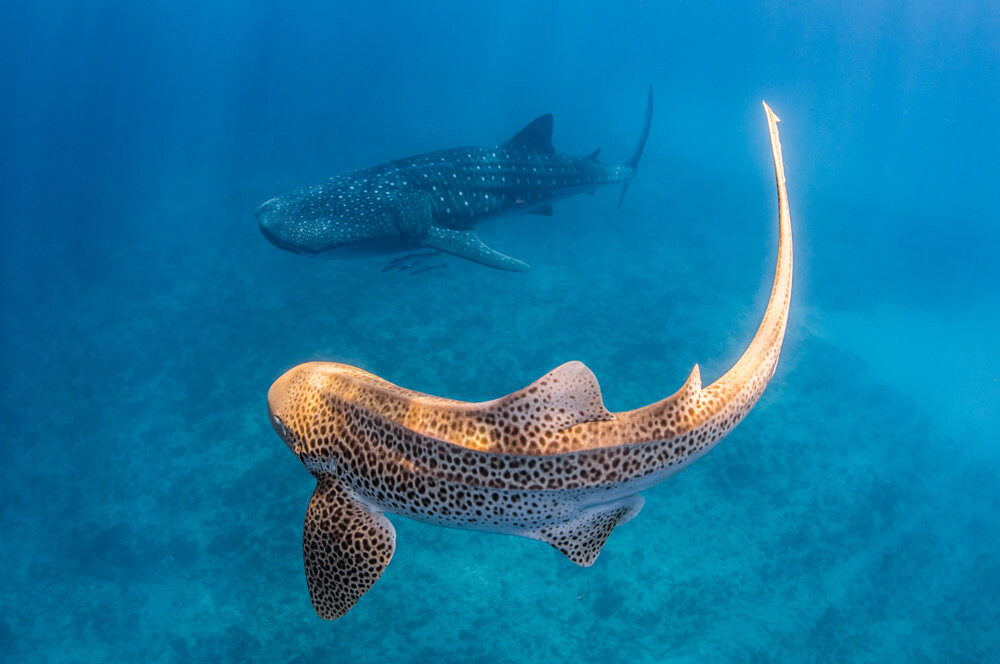 Jess remembers falling in love with Scuba Diving for the first time while living in Dunsborough. His dad had rocked up to school and pulled him out of class for the day to participate in a free Discover Scuba Dive course off Eagle Bay. Swimming in the shallows, watching Eagle Rays, never having to surface for air… At just 15, he was hooked.

Underwater photography became a quick hobby for Jess, who purchased his first underwater camera set up not long after this experience. Pushed by a desire to protect his new discovery, he hoped by sharing his photographs, it would inspire others to fall in love with the ocean.

Hobby became business when, on his 17th birthday, his mum gifted him a trip to Ningaloo Reef to swim with the whale sharks. During this trip Jess realised people were actually employed as underwater photographers on the boats, making a living swimming with sharks every day, and he wanted to do it too. 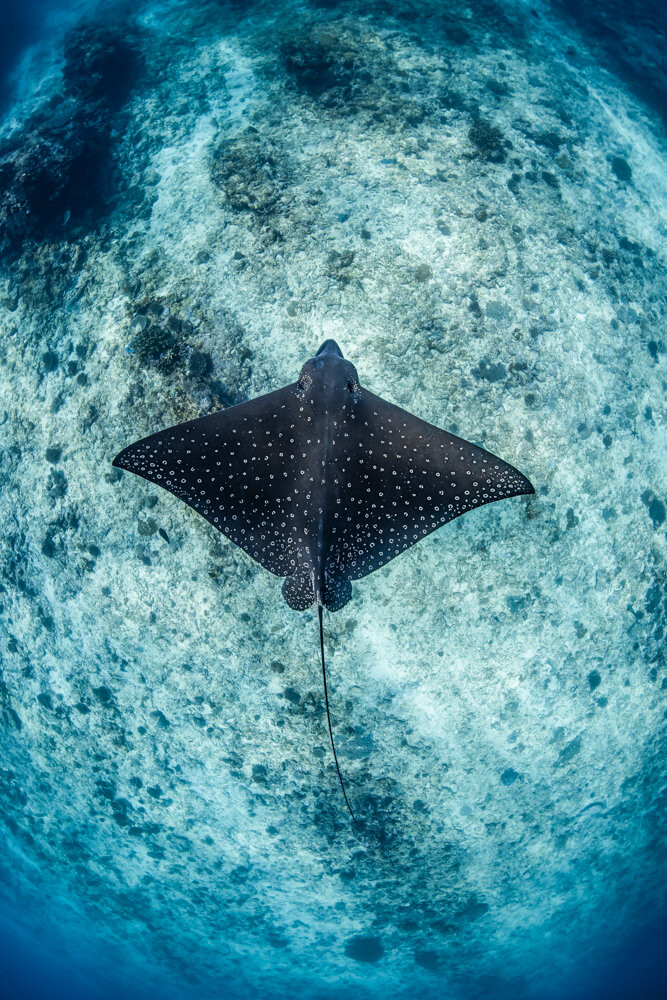 After completing a Diploma of Marine Studies, he applied to every single company possible until landing a job in Coral Bay. A couple of years later, working as a photographer for a whale shark tour, he moved to Exmouth and has not looked back.

“We’re never leaving. It’s awesome, such a good lifestyle. You’ve got the reef right there and, even on windy days when you can’t get out on the water, you’ve got the range to go hiking and explore the gorges. There’s endless things to do.”

Working on the boats means rising early and picking up clients for 7am. It’s a little bit of a drive to the boat ramp and they need to be in the water at 8am. June is peak season and, since the international borders closed, it’s only been getting busier.

It’s also been a La Niña , with warmer water and the stronger currents. While Jess would normally be in a full-length wet suit by July, the strange weather has meant it still feels like May. That hasn’t detracted the marine life, though, who have stuck around much longer than expected.

In an attempt to extend the season once the whale sharks migrate, they have been operating swimming with humpback whale trials. In November, when the whales migrate, the turtles start nesting and hatching. There is something beautiful happening all year round. 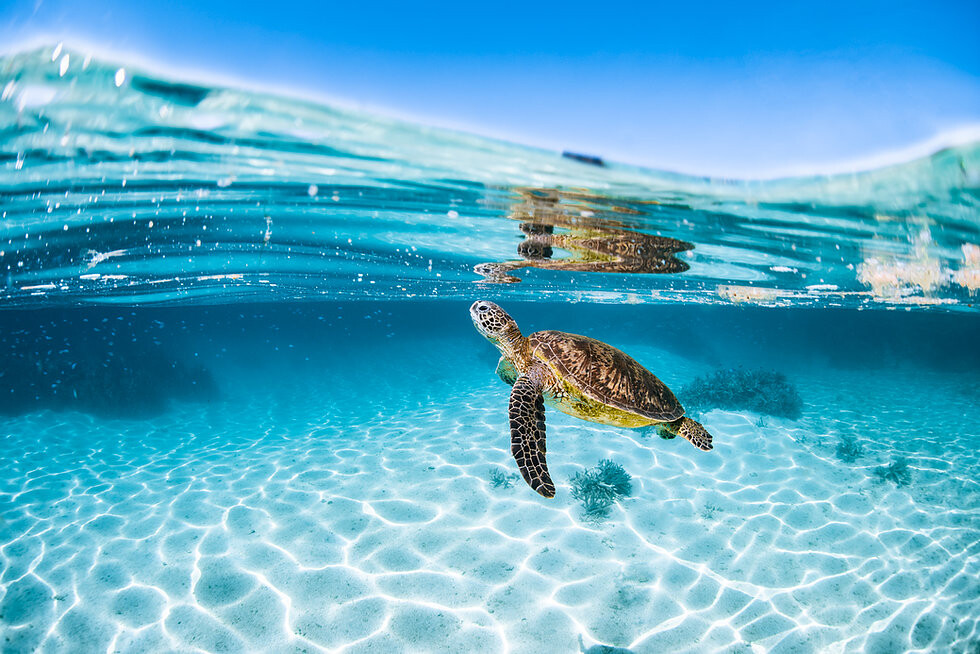 Around the world, whale shark populations have been in decline, and they are now considered an endangered species. In Exmouth, though, the figures are going up. Jess isn’t sure if this is because food populations are declining elsewhere and sharks are coming to feed here, or if it’s because there are more boats in the water charting their movements.

Legally, photographers on each charter have to take identification shots and log them for research. This is done through a special program designed by NASA. Whale sharks have distinctive dots on their skin and, like the human fingerprint, no two sharks are the same.

“Like they align the stars, they align the dots. And the dots tell us if it’s a new one. So we get a few new entries each year. It’s going against everything everyone else is saying around the world.” 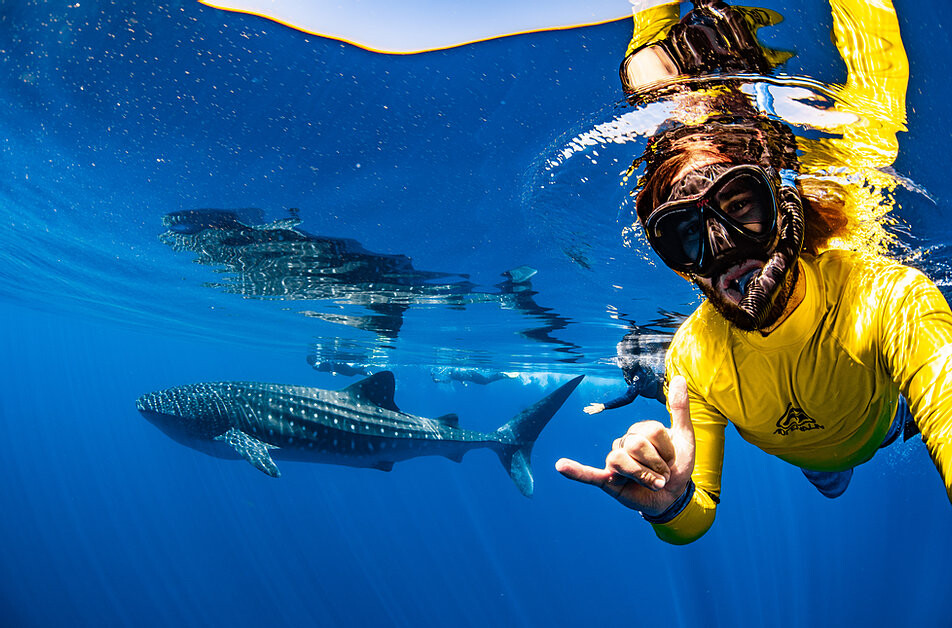 Jess and a whale shark. Photo by Jess Hadden.

If you ask Jess what his favourite animal is, you might expect to hear the word shark. You would be wrong. At the moment, it’s the sea horse.

“When you swim with a whale shark every day for 8 years, it’s still amazing, but you start looking for other things instead of just the whale shark. So, if there’s little bits of seaweed in the water, I tend to be looking to see if I can find a seahorse.”

Part of the wonder in underwater photography is finding new creatures to tick off his bucket list, and Jess has his sights set on photographing the basking shark, blue whale, orca, and great white. Every year, he finds something different. 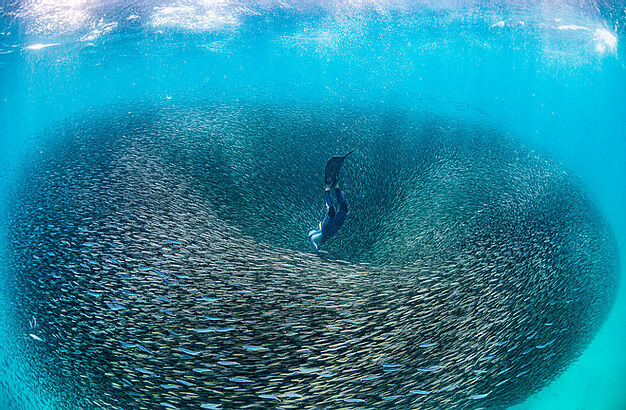 A year on from the lockdown that delayed his gallery opening, Jess has stopped working on the boats. Instead, he has been putting more energy into staffing the gallery to make up for lost time. Gallery 6707 just celebrated its first year, officially opening post-lockdown on 19 June 2020. Family, friends, and community came down for the opening. One of the first things people did after being locked down for so long, the turnout was huge.

Not only do Jess and Sadie run their gallery together, but they also exhibit together. Recently collaborating on Ningaloo Stories, which currently displayed in the Tantabiddi Travelling Gallery.

“It looks pretty phenomenal in the big proper open gallery space. It’s quite nice seeing it to from our little commercial gallery to a proper gallery gallery.”

With the commercial gallery operating successfully, Jess is now looking at hiring staff to take time some of the pressure off. He wants to get back to what he does best – photography. 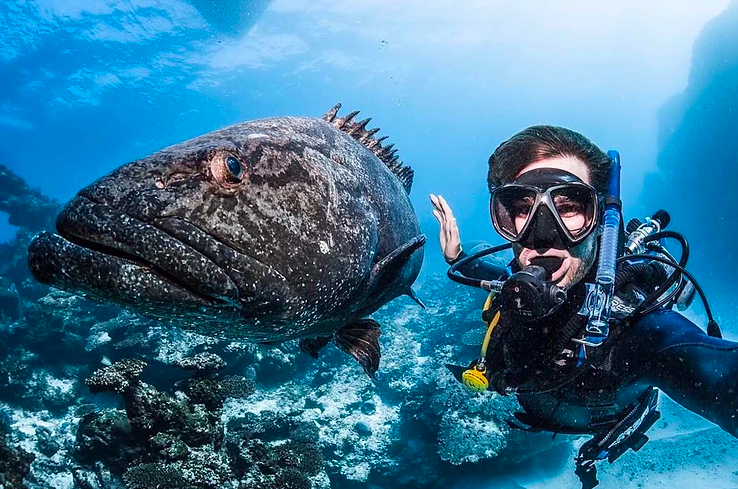 Jess swims with a Potato Cod. Photo by Jess Hadden.

Having conquered the ocean, Jess now has his sights set on the skies and is working on a series of aerial landscapes and seascapes of the coast. While he started with drones, he has since moved on to chartering microlight aircraft and scenic planes. He thinks chartering is just as expensive as replacing all the drones he loses to the ocean.

“I’m not very good with a drone, I must admit. I tend to donate them to the Ocean Gods. Instead of me playing with a remote control I just tell the pilot where to go and what to do.”

If swimming with sharks wasn’t scary enough, Jess said he got permission to take the door off the plane so he could get a better view! His recent trip to the other side of the gulf and on to Onslow provided some stunning imagery, and his next trip is planned down the coast to Carnarvon. While his aerial photography provides a very different perspective on our world than underwater photography, it is no less impressive. 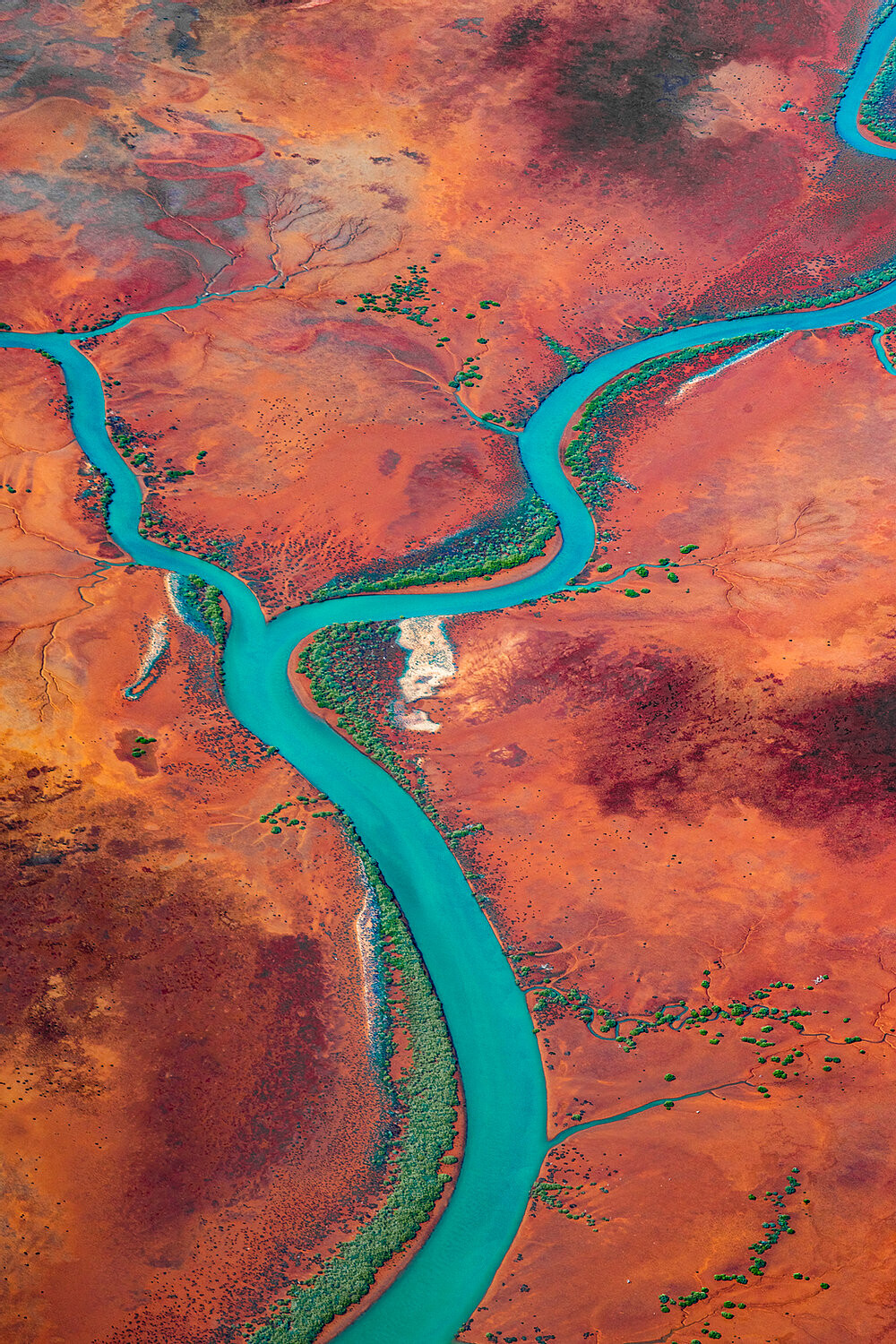 A Land Before Time. Photo by Jess Hadden.

Eager to capture the rest of WA from every angle possible, Jess is always looking for people to collaborate with outside of Exmouth and Ningaloo. He has a bucket list of critters to photograph, and a passion to spread his love of the ocean.