Update 21 January 2021: The 2022 Boyup Brook Country Music Festival has been cancelled due to ongoing risks posed by COVID-19. More detailes available at countrymusicwa.com.au.

For 36 years, local musicians have performed at the Boyup Brook Country Music Festival alongside some of the country’s biggest live music acts. With 2022 festival planning well underway, I sat down with Club President Daly Winter to talk about what makes the festival experience so special.

Organising a music festival will always have its challenges; wrangling artists, planning stages and line-ups, drawing a crowd, and even praying for good weather. For the committee of the Country Music Club of Boyup Brook, organising the 2022 festival has drawn a new challenge: COVID-19 restrictions. 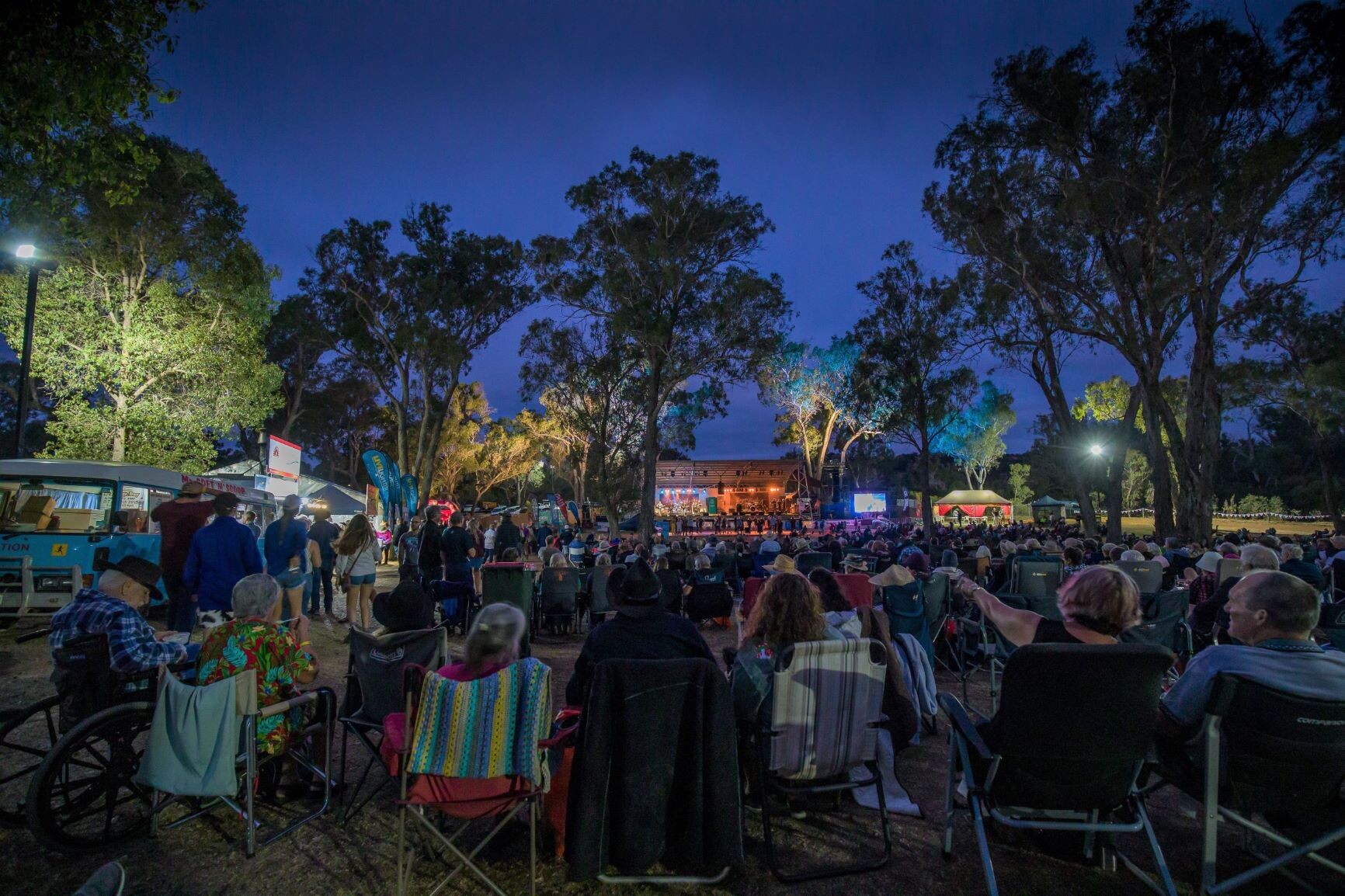 Evening concert in the park. Photo by Tom Kirk, courtesy of the Country Music Club of Boyup Brook WA Inc.

Many past WA acts have graced the stage of the Boyup Brook Country Music Festival, including The Sunny Cowgirls, Chelsea Basham, Codee-Lee, Cameron Wilkes, Karin Page, The Little Lord Street Band, and even local legend Adam Brand. While some of these artists were already household names, many others were trying to make their dreams come true.

After performing at the festival early in their careers, The Sunny Cowgirls secured a place at the CMAA College of Country Music in Tamworth, where they were soon signed by Compass Bros Records and had their first album make the ARIA charts.

Likewise, musician Codee-Lee had her first big break performing at the Boyup Brook Country Music Festival. Since then, she has gone on to win 10 WA Country Music Awards and 2 WAM Regional Song of the Year Awards and has been a Top 100 contestant on The Voice Australia and a finalist in the Telstra Road to Tamworth competition. She has performed at Times Square New York, received advice from Keith Urban, and spent time honing her craft in Nashville. 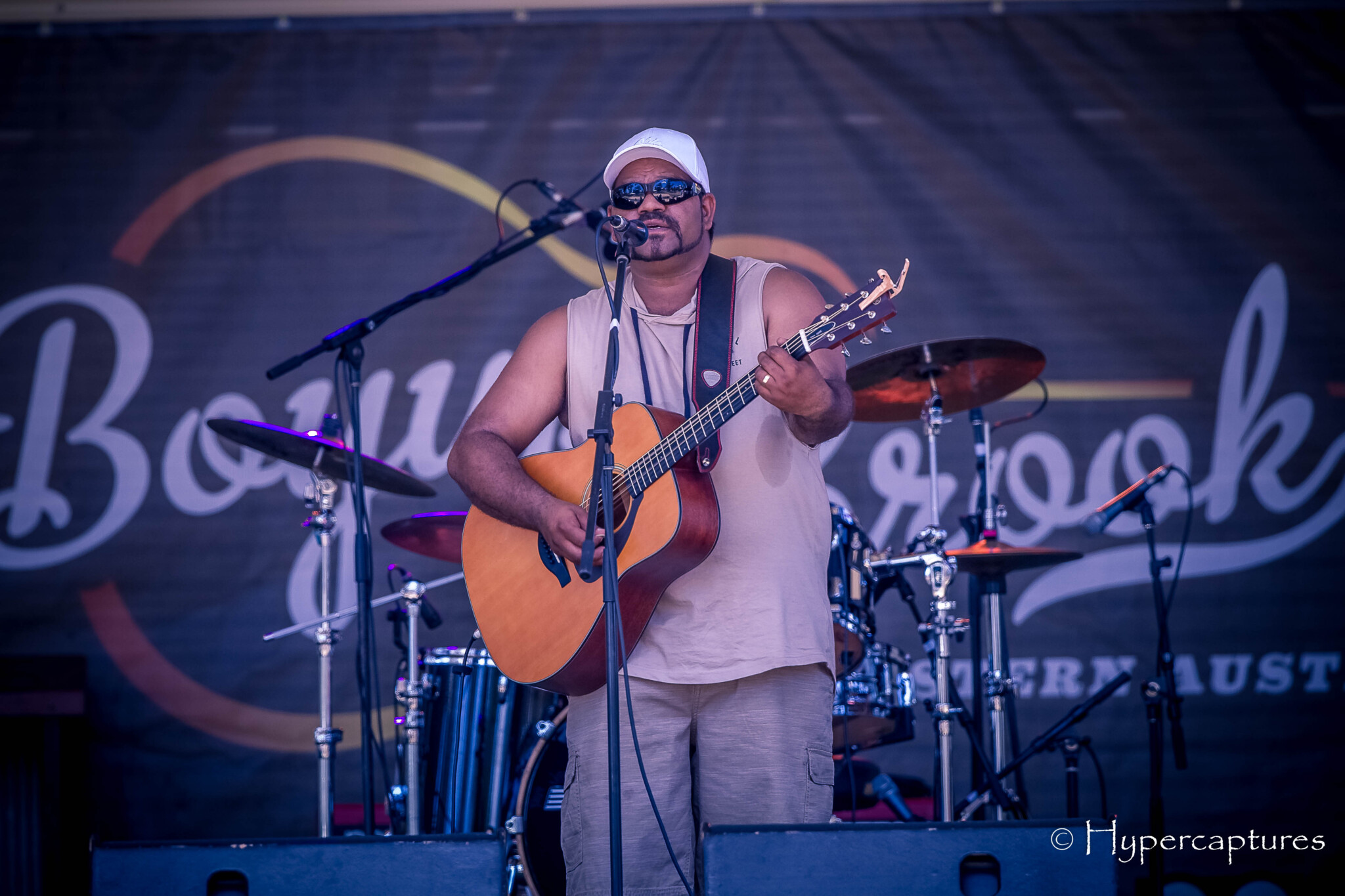 With only one paid staff member, volunteers offer their time and experience to the club throughout the year; acting as the wheels behind the scenes to make sure everything moves forward as planned.

President Daly Winter has volunteered on the Country Music Cub’s committee for over 20 years and says event and festival planning would not be possible without the help of dedicated volunteers. Many of whom, like himself, have been in positions on the committee for many years.

Volunteers at the Boyup Brook Country Music Club come from a variety of backgrounds – from retired customs officers and former bank managers to electricians and even medical personnel – but they all share one passion. A love of country music. Every single one of them wants to help grow and support their local communities and the local country music scene.

Unfortunately, not all volunteers are able to commit year-round, and finding new volunteers to take on the reins can be difficult.

“Trying to bring new volunteers in to take over the mantle and take up the challenge is the hard part. People are happy to volunteer for the day but won’t necessarily come onto the committee and work through the year.”

Thanks to the hard work of the Country Music Club of Boyup Brook, The Country Music Festival and Country Music Awards have become a calendar staple in the WA festival scene, welcoming and celebrating many local artists across WA.

From humble beginnings in 1986, with artists playing to an audience of just 500 people, the festival now attracts thousands of country music lovers each year to the small farming community of just 1,500 people.

In the festival’s early years, dedicated punters would crowd the town’s football oval to hear some of their favourite local country music acts perform live under the marquee. Hosted in the heat of summer, there was very little available shade for the delighted audience who got creative by grouping under umbrellas and tarps.

If the club wanted to grow the festival, attracting larger crowds and new music acts each year, they realised they needed to find an alternative space. Not too far away, they found the picturesque banks of the Blackwood River.

Transforming the Blackwood banks was a huge group effort. Volunteers worked hard to mow the area, tidy up the sticks and debris, clear the rubbish and create a presentable looking space. When all was said and done – they had a new venue, and that venue was a huge success.

Approaching the shire for permission to permanently develop the space, the County Music Club transformed the dusty, dirty banks of the Blackwood into a new purpose-built facility. Opening in 2007, The Music Park has since become an icon in the WA country music scene and a public asset for the community of Boyup Brook. 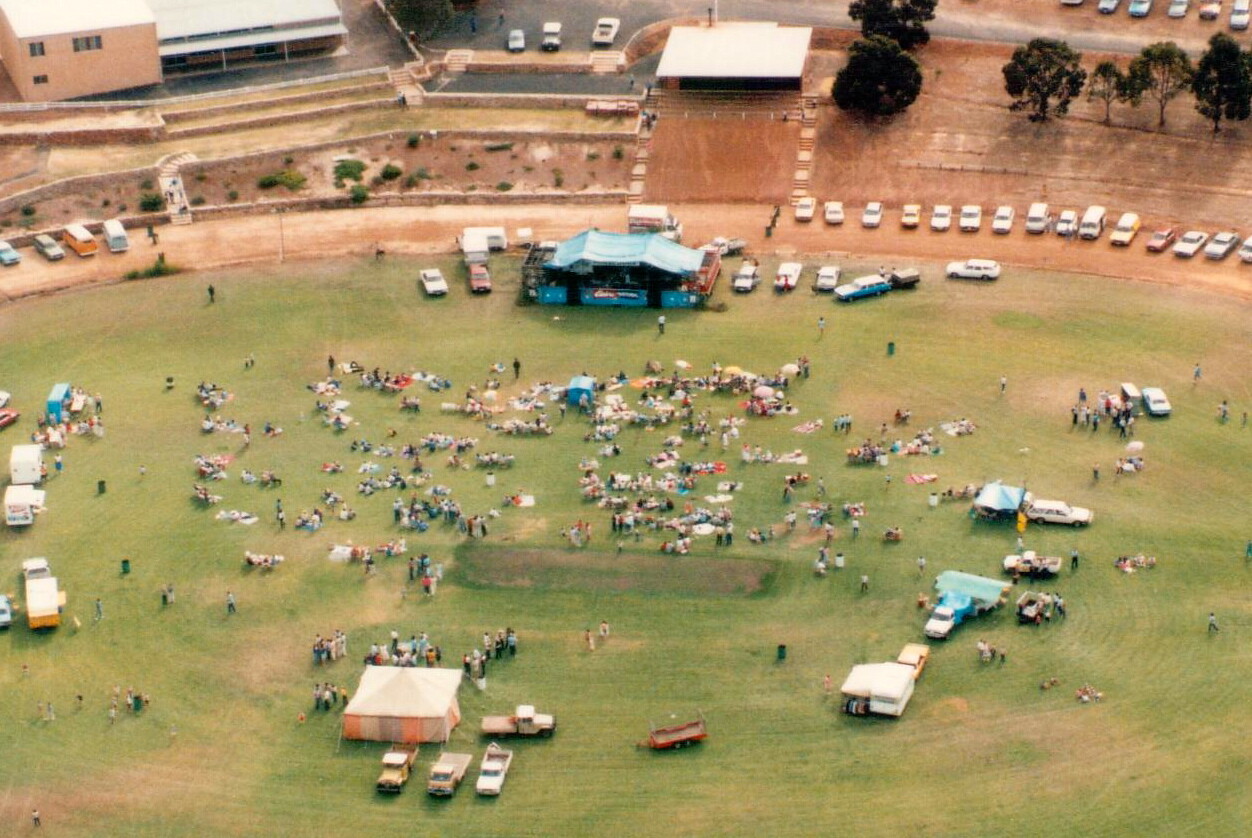 In the 36 years the Country Music Club of Boyup Brook have been organising the festival, it has only been cancelled once. After a successful 2020 Festival, narrowly avoiding the first COVID-19 lockdowns, new restrictions made it difficult to plan and organise for 2021. Although the committee attempted to push the festival back to November, it just wasn’t meant to be.

“With everything changing it was hard. Every time we thought we got to a point where we had gotten it right, goal posts would change, and we were going backwards again.”

The team stayed positive and achieved more in 2021 than any other year – even without the festival taking place. Between planning for future events, running workshops, supporting community events and local musicians, the Country Music Club of Boyup Brook experienced the busiest year they’d ever seen. 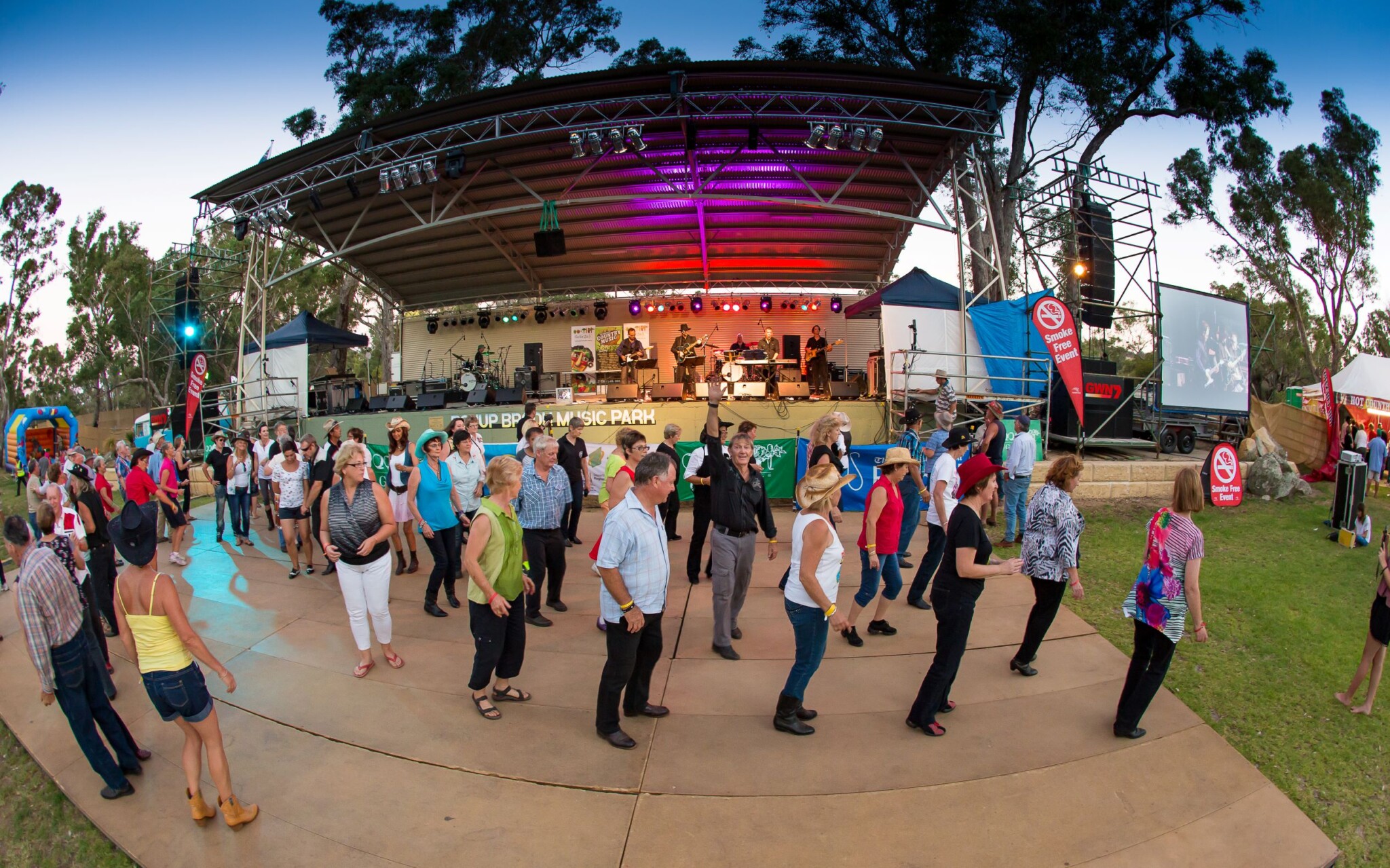 Bootscootin’ on the dance floor. Photo by Tom Kirk, courtesy of the Country Music Club of Boyup Brook WA Inc.

Over the years, the family-friendly festival has grown to include live music, awards, bush poetry, industry and art workshops, interactive activities, street carnivals and markets, and the annual Boyup Brook Ute and Truck Muster.

Introduced in 2004, the Ute and Truck Muster has fast become a favourite in the community. On a Saturday morning during the festival, the local community will see a parade of colourful vehicles drive through the streets of Boyup Brook. Ute and truck enthusiasts gather, share their passions, and have their vehicles judges as they compete for prizes.

It’s easy to get the community involved in these events, because there’s always something different and exciting each year.

“It really brings the town alive. Closing the streets off and having the parades, the buskers and the bands, the circus skills, and all those things that accompany something that’s different to the normal run of the day.”

Community involvement has had many economic and cultural benefits for the small town of Boyup Brook, through fundraising and assistance in the development of skills in collaboration with local, state, and national artists.

Through their events, the Country Music Club of Boyup Brook WA Inc. have supported many charities, community groups, and organisations. Since 2011 Caring for kids, through their involvement with the festival, has raised around $60,000 for children living with cancer and in the last six years, over $115,000 has been passed onto local community groups.

Each year the football club, high school, and primary school turn their schools into temporary campgrounds for festivalgoers to use. In just one weekend they can fundraise up to $3,000 each just through camping alone.

“The festival creates a focus on our community and assists in celebrating our achievements and helps to foster a sense of identity and belonging. It is an exhilarating celebration of performing artists, outdoor entertainment and community spirit.” 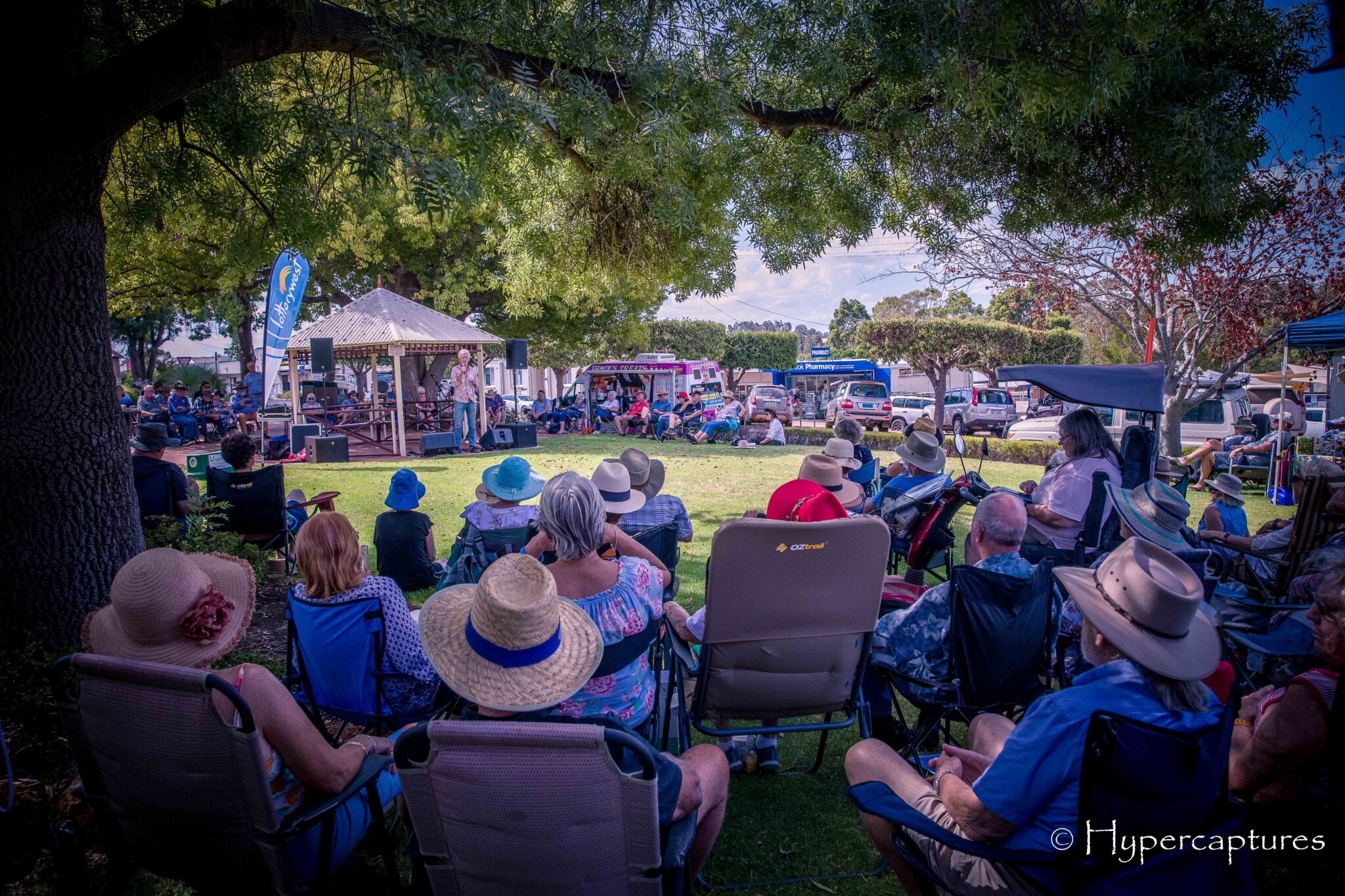 While the festival line-up for 2022 has not yet been announced, Daly promises, “it’s going to be the biggest line up of West Australian Country Music artists ever.”

“I think if people haven’t experienced a country music event, I would recommend that they come to Boyup Brook in February and feel the excitement… and if you just want to get away, it’s a good place to come to, so come and enjoy it!”

For more information on the Country Music Club of Boyup Brook WA Inc. and the Boyup Brook Country Music Festival, visit their website. If you want to be the first to know when the line-up is released, make sure to follow them on Facebook and Instagram. To get in contact about getting involved, email hello@wacountrymusic.com.au or phone (08) 9765 1657.