When Djaru woman Bianca Long decided to create a fashion label in the small town of Wyndham she knew she would have to do things a little differently.

Growing up in Halls Creek, Bianca fondly remembers going camping and fishing with her family. Even as a child she recalls feeling lucky to live in such a beautiful place where she could hear birds singing, see animals and insects, and enjoy the different colours of the Country around her. 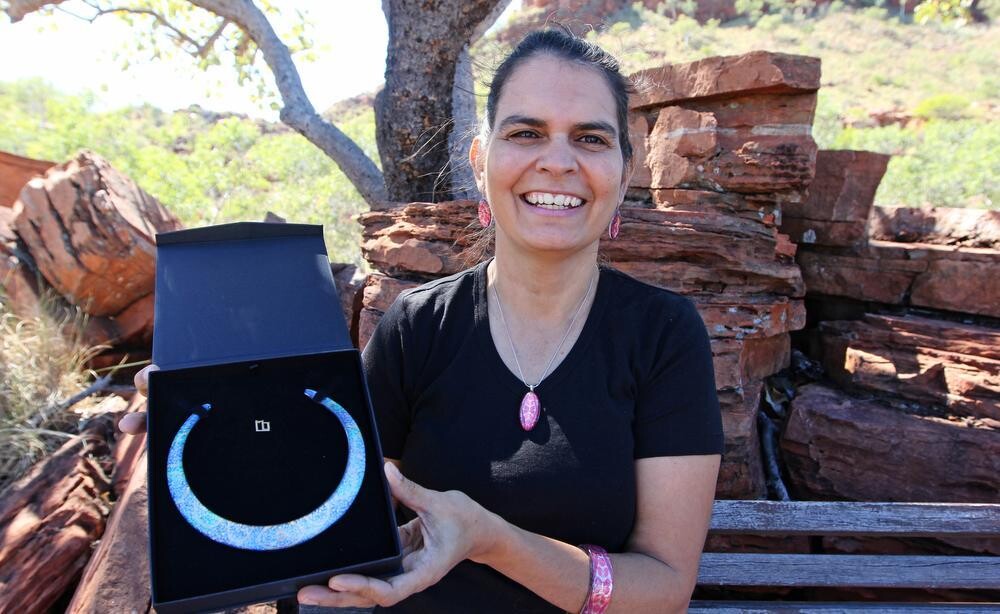 Life has taken her many new places since then. After finishing primary school in Halls Creek, and high school in Perth, she left for Queensland to attend an agricultural college before starting work in the mining oil and gas industries. Working for Rio Tinto, Eni Australia and Woodside, she spent time living in Queensland, the Northern Territory and various regions of Western Australia, before settling with her husband in Wyndham.

Each place Bianca lived left a mark on her and her feelings for the Country she grew up with have stayed with her as an adult. These special memories, and special places, now underpin much of her practice as an artist.

“The connection to Country is important for me as an Aboriginal person.” 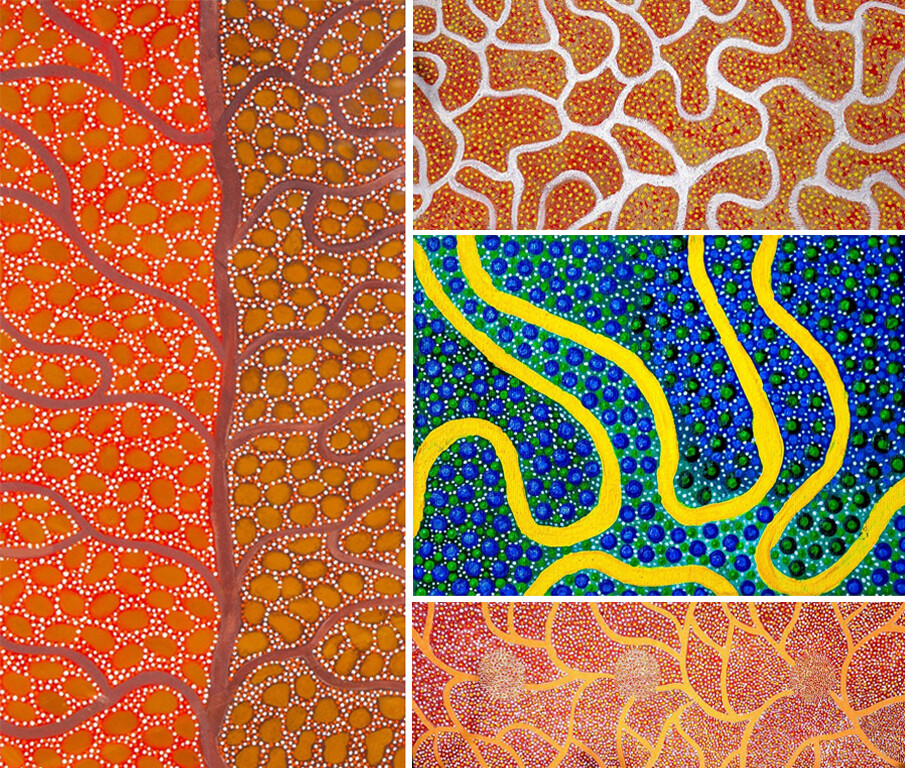 While she had dabbled in arts at school, it was while working for Woodside in the Pilbara that Bianca started painting. Tasked with helping secure artworks for the annual Woodside Art Exhibition in Perth she became acquainted with the Yinjaa Barni Art Centre in Roebourne.

“I would go in on the weekends, and on my time off from work, to sit down with the ladies and do some art work with them. The manager sort of helped me develop my skills and taught me different techniques to do as part of creating my unique art.”

After becoming a member of the Yinjaa Barni Art group, Bianca began selling her paintings and soon realised there was a market for her work. This gave her the confidence she needed to take herself seriously as an artist. 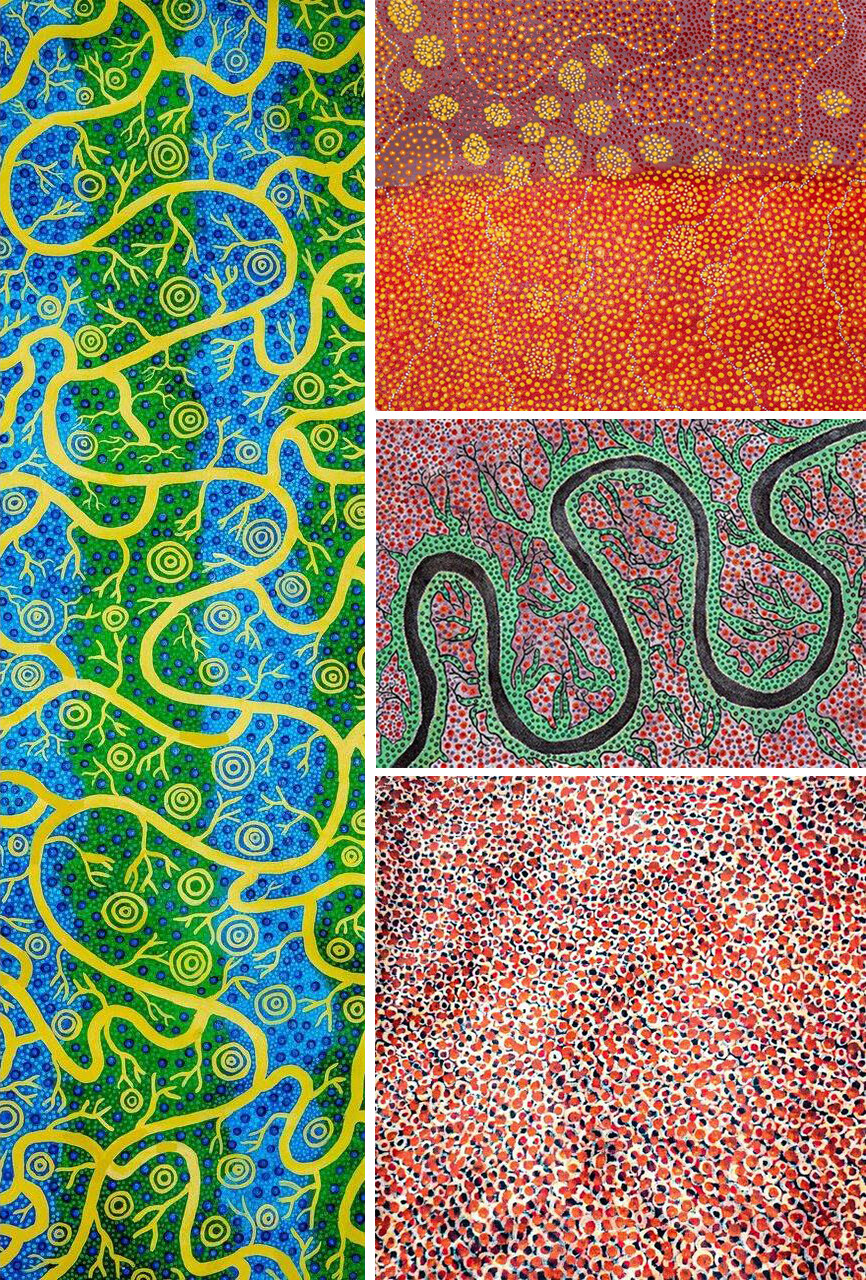 Now, as a contemporary artist Bianca uses two mediums to paint: ochre and acrylic. While most people choose one or the other, Bianca combines the two. She says the ochre represents her Aboriginality, while the acrylics represent her non-aboriginal background.

All of Bianca’s paintings represent her Country, her family, and the areas she has lived and travelled throughout her life. Her father is a Djaru man of Sturt Creek, where her great grandmother and grandfather are also from. Sturt Creek, and the Ringer Soak area, are present in her paintings. As are Karratha, Roebourne, the Northern Territory, Wyndham, and Halls Creek where she has lived and worked. Her paintings look like aerial photos showing the different areas and features of the land: Rivers, creeks, grasses, and the flowers that decorate her Country.

To represent the texture of the land, Bianca mixes her mediums and uses natural elements such as sand. She often mixes sand with paint to get a rough texture, while also mixing ochre and acrylic for other textures.

“When I paint everything has a bit of a connection to Country.”

Bianca’s paintings have since been the inspiration for two jewellery ranges, appeared on home décor, and have been purchased to create scarves and ties for a mining company. In 2019, she worked alongside other local artists and young people to paint a mural for NAIDOC Week onto the store she owns with her husband in Wyndham. 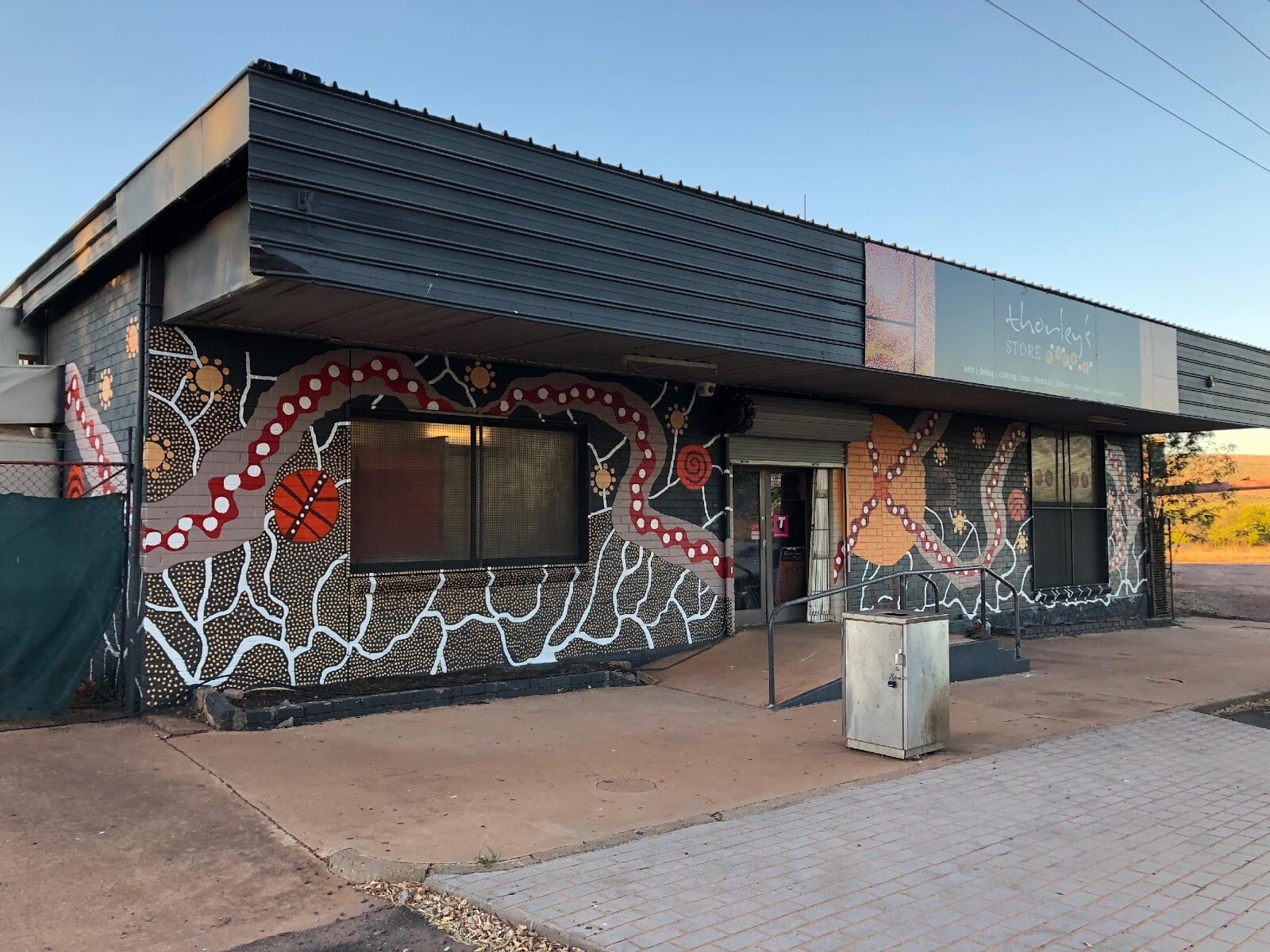 The mural on Bianca’s store. Photo courtesy of Bianca Long.

It had been a dream of Bianca’s to turn her paintings into wearable art, and after seeing many Aboriginal designers translate their work onto textile and garments she decided to take the plunge and see what that would look like for her. This began a five year journey of research and design.

In 2020, Bianca was successful in receiving a Regional Arts Resilience Grant allowing her to convert her canvas paintings into textile.

Enlisting a professional photographer to take high-resolution photos of her paintings, Bianca found a company in Sydney who specialised in print-ready fabrics. They were able to convert her paintings into a repeat pattern and have fabric printed. Just like that her fashion label, Jaru Girl, was born. 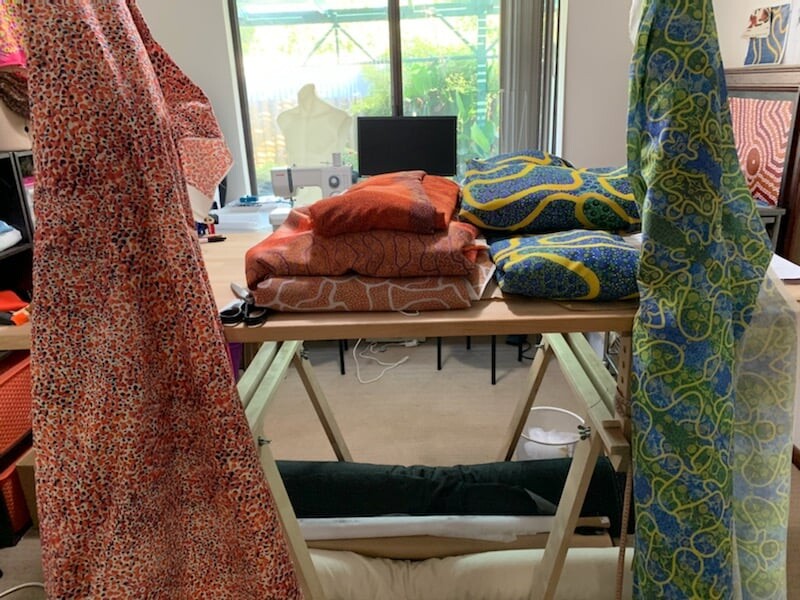 The Jaru Girl label consists of eight different prints based on Bianca’s original canvas paintings. Her connection to her family led her to include women’s, men’s, children’s and plus sized fashions in her collection. This way, everyone in the family could wear a Jaru Girl design.

Keeping everything Australian made and Australian owned was another important decision for Bianca. Everything from printing, to manufacturing and designing was done in Australia. She worked with Linda Molendijk-Parr to make the garments in Perth, and Kununurra photographer Sarah Duguid to shoot the collection in the Kimberley.

“It’s all about promoting Australia and promoting WA. That’s something I was really conscious about. I didn’t want to get sources from overseas, I wanted to keep everything in Australia. I’m proud of my culture, my heritage and where I come from.” 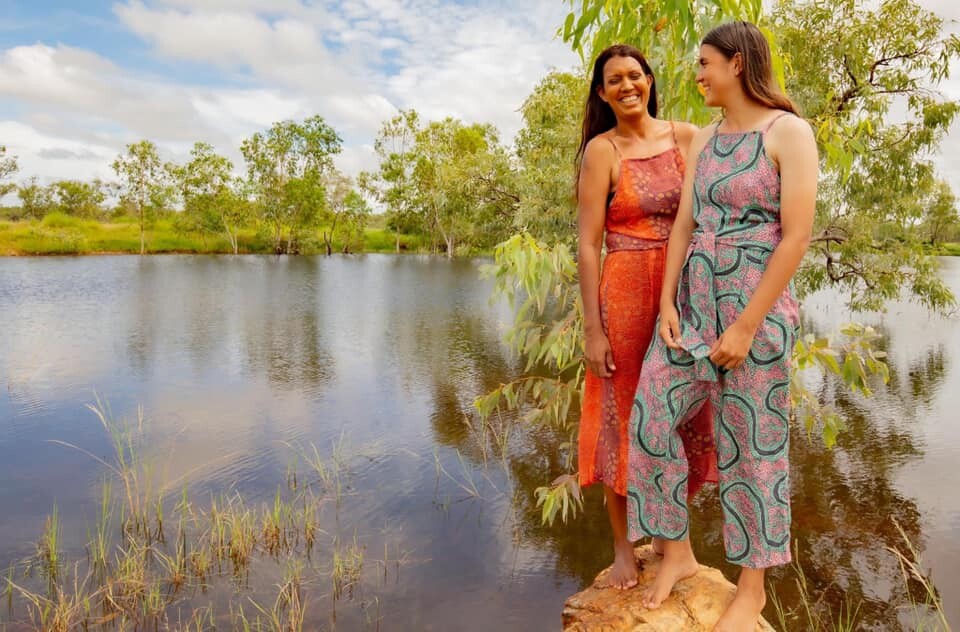 Some of the fashions from the Jaru Girl brand. Photo courtesy of Bianca Long.

Bianca enlisted the help of her sister, niece and aunt to model the garments. She also worked with a business mentor to source additional models from around the East Kimberley. This included young school kids from Wyndham and a local emerging model, who was also a young Djaru girl.

“I was conscious of the fact that I wanted to keep my label and brand as Djaru and show that that’s my Country, and I wanted people that represent me and my brand.”

Adapting to her surroundings, all the photos taken for the brand were on Country in either Wyndham or Halls Creek. Each location had special meaning to Bianca and the Jaru Girl brand. 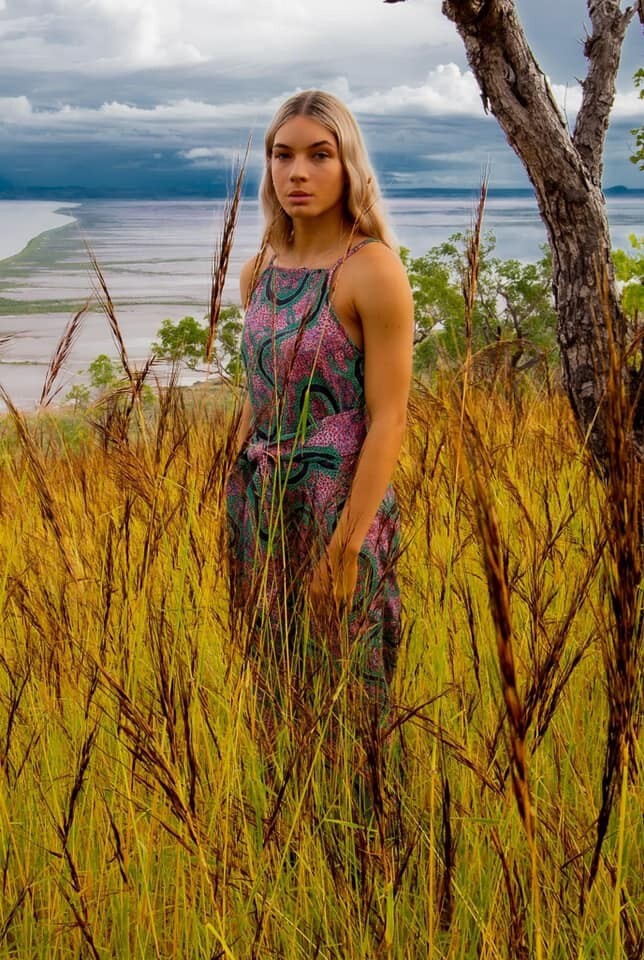 Jumpsuit from the Jaru Girl brand, created from the painting, River flowing on to mudflats. Photo courtesy of Bianca Long.

Photographs were taken at the Five Rivers Lookout, or the Bastion, which looks out over the whole of Wyndham where the five mighty Kimberley Rivers meet and flow into the ocean. To Bianca, this represents where she is from, where she currently lives, and where she has made her home. Other Wyndham locations included the mudflats featured in the paintings she had used to create fabric.

Heading to Halls Creek, they shot on location at the Moola Bulla lookout. This was a place of significance to Bianca as her father once worked out of Moola Bulla Station, where his family had lived. Her parents now own a 100 hectare property in Halls Creek with a big dam, so they also chose to shoot at the property.

“We took a lot of photos there. It was special to me because it was my connection, not only to Country, but also to the Jaru Girl brand and family. It was sort of a whole family event.” 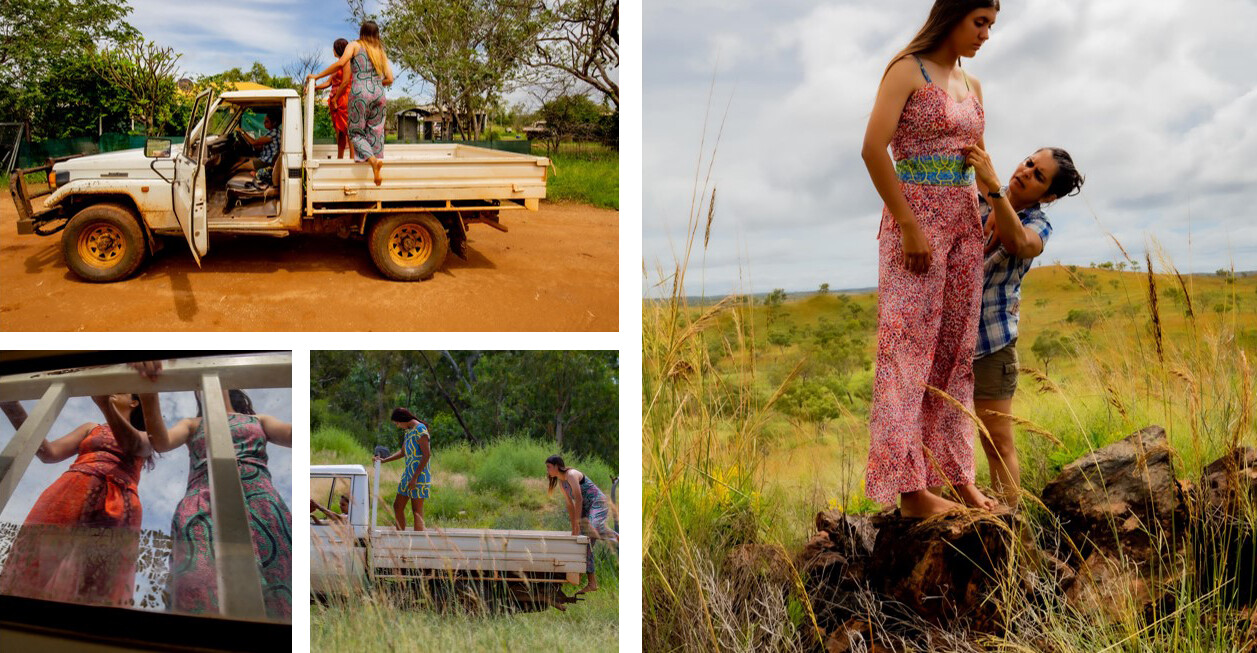 A collection of photos taken behind the scenes of the Jaru Girl photoshoot. Photos courtesy of Bianca Long.

Bianca’s father also helped by taking them on the back of a ute around his property. He showed the group different spots on the block they could look for locations.

“That in itself shows you we had to do things a bit differently, that’s how we do it in the bush. But we can still make it classy, which it was.”

The official launch was marked with a fashion show. Without the amenities of a big city, Bianca converted half of her store into a runway. Pallets covered with red material were used as the runway, and white sheets were hung to block the store off and create an immersive fashion hub.

Launching the brand wasn’t without its hiccups. From garments arriving late, technical issues, and people not showing up, the team were kept on their toes. But you have to be flexible when you live in the Kimberley, and the night was a huge success. 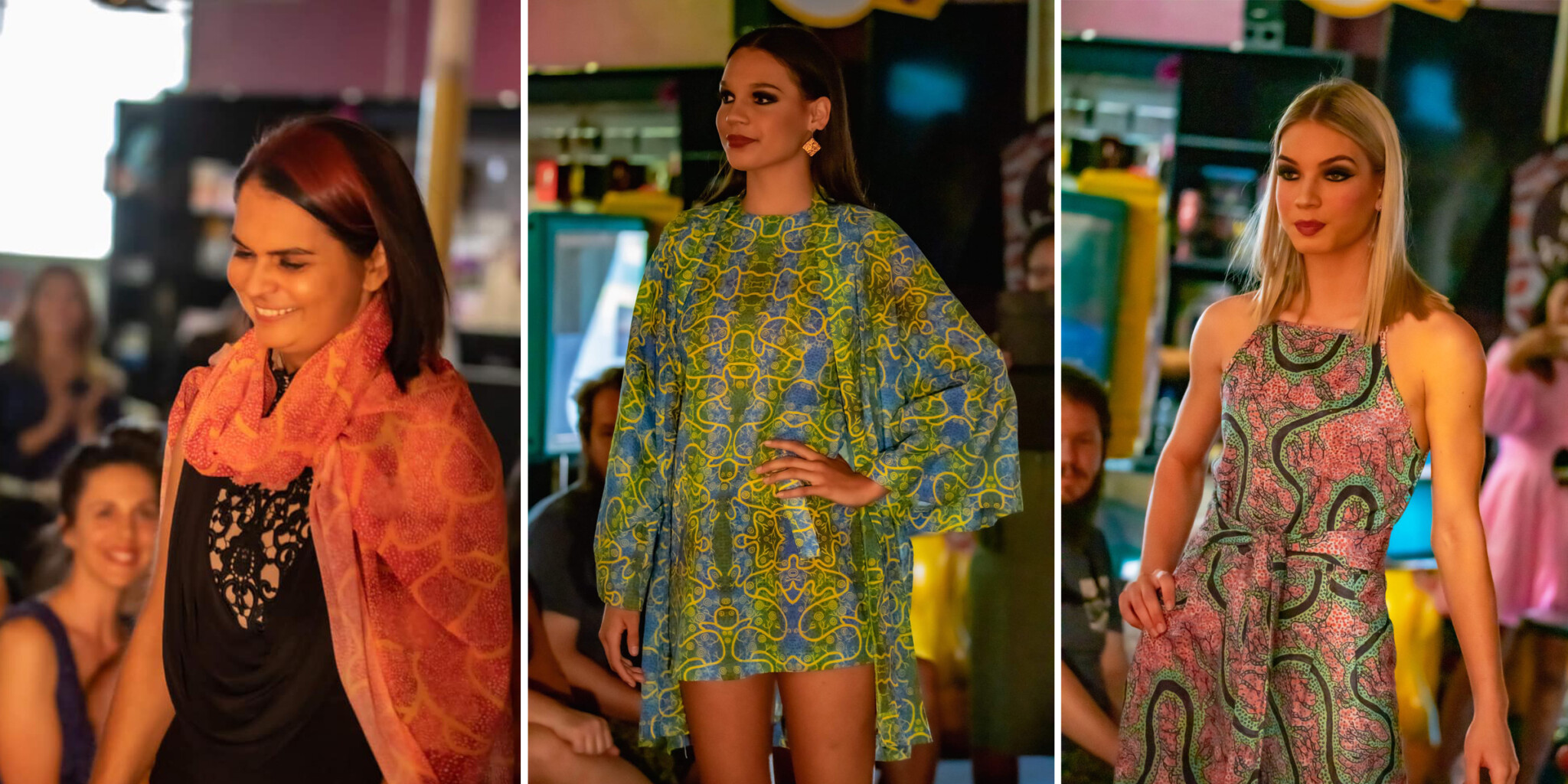 Launch night was booked out, with about 40 guests packing into the small store for the runway show. A Facebook livestream was held so even more people could join in, no matter where in the world they were. Jaru Girl enjoyed quite a few responses during the livestream, but even more exciting for Bianca was that responses kept coming after the event was over.

Word had gotten around the event was held, and people began looking for the brand on Facebook and watching the livestream days, even weeks, later. People also began interacting with the brand’s Facebook posts.

“We put up a lot of posts of the garments and girls wearing the garments. One post got over 6,000 views! It’s been a bit of an exciting and crazy ride, but I’ve enjoyed it.”

What’s next for Bianca and the Jaru Girl label? Well, she can’t tell you just yet. There is a new project underway, and a possible fashion show in the future, which she will announce on social media. But for now – watch this space for all the exciting things still to come.