Anton Felix Blume is an artist who works in the between. Between the Gascoyne and the South West. Between Australia and Europe. Between the arts and design. Between collaborations and solo practice.

And because of this, he loves the creative challenge but can’t be pigeonholed into one particular genre. Although photography has been the one constant across his practice, he is quick to point out that doesn’t mean he is just a photographer. 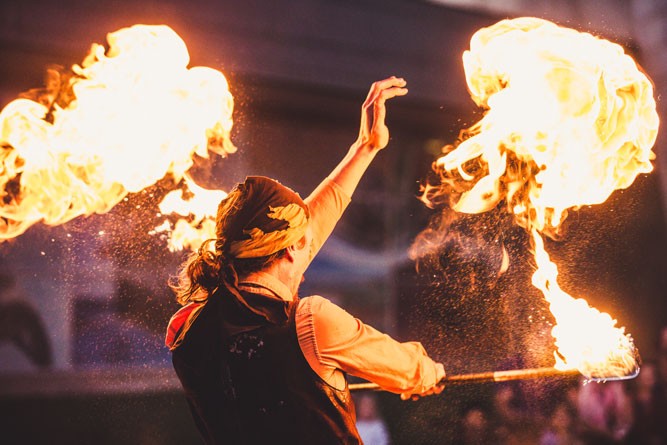 Spindrift at Gascoyne in May 2018. Picture by Anton Blume.

Originally from Germany, he moved to Carnarvon just as the Gascoyne was announced as the Focus Region for Regional Arts WA.  With investments in organisations like Gascoyne In May, bit by bit more arts projects were established, then public art increased and suddenly he was no longer working solely in applied design and marketing but more so in community art, public art and the fine arts.

“Carnarvon is large enough to attract people and projects, but small enough so you can meet all these people and network.”

“Regional Arts is not a laboratory with no outside influences. When you work in the regions you have to deal with so many perspectives, resistance, and you can’t ignore it or it will very quickly be your last project.”

Together with Sabrina Dowling Giudici and Bonni Ingram, Anton formed a collaboration – Fuse Art Collective. It started 2014 over an EOI for the new Carnarvon hospital. They tried to generate a joint approach across various cultures – Italian/Australian, Badimia/Yamatji, and a migrant from Germany. There are lots of differences between them, but lots of things that unite them, and Carnarvon being a multicultural town, they felt the urge to create artwork from that multi-perspective angle. 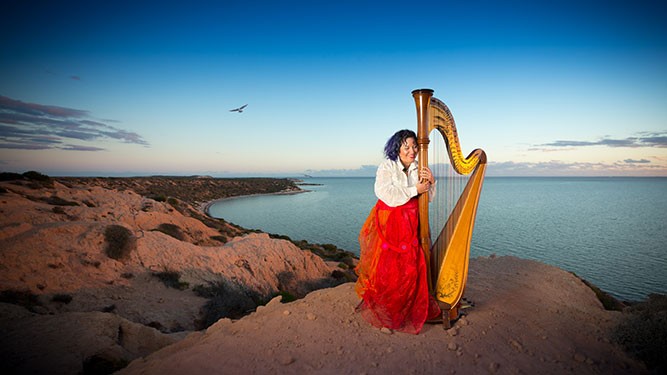 Harpist Catherine Ashley, Gascoyne in May 2017. Picture by Anton Blume.

They’ve since collaborated on five public art projects, including several works on the Carnarvon main street and foreshore, and have started creating a fine art series where diverse arts practices are fused together in a digital environment. They were also invited to participate in the Passagen International Design Fair in Cologne, where some of their sculptures were exhibited. Following their nomination for the design prize, a prominent Gascoyne local was quoted as saying “well maybe the money (on public art) was well spent after all”.

The shift from Gascoyne to South West has brought about a change in outputs – he’s more private at the moment. Raising kids and looking at how he can personally make changes to address climate change, “you can talk so much, but if you don’t show on a daily basis how, it can remain unheard.”

But that doesn’t mean he doesn’t have a few things brewing and isn’t looking for the next opportunity. Through Gascoyne In May he has partnered with Artist Oscar MC to created a fire sculpture – a kinetic scrap metal dragon that spits fire from its maw. The project is currently sitting at Version One but Anton is looking for investment for more sculptures and is keen to work with men’s groups and schools in internships; to create further festival machines and a Version Two of the sculpture that can travel and go to festivals.

He’s also maintained his interest in photography and creating photorealistic work for the arts and related marketing opportunities, having recently completed a project with a theatre group in Margaret River. All this, in between taking some personal time to project build a house on wheels that runs on vegetable oil!