Andy describes this artform as painting outdoors without the guidance of a photograph – capturing the real light and colours which only the eye can see. 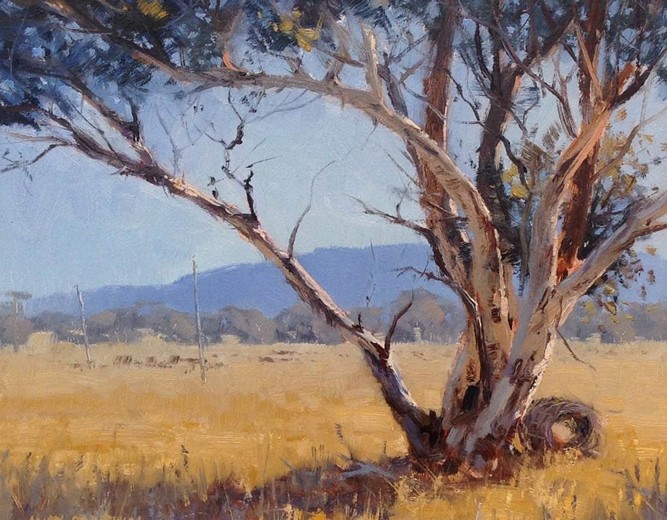 One of the works Andy completed in oil, before he was forced to stop for health reasons. Picture by Andy Dolphin.

Andy speaks to the strengths of this practice in its ability to convey true, physical presence: You can feel how cold or warm it was when a work was created, how the light moved, how the artist felt in the moment, how they braved the mosquitos and were wary of tiger snakes.

He has won various awards in several community competitions in Perth and regional WA.  A few years ago, his passion for oil painting took a tricky turn due to health concerns from the use of solvents. He is currently at a standstill with his beloved oils, as he pursues alternative mediums so that he can achieve the same results.

While his painting has been on hold this has opened up opportunities for him to explore new mediums and hone in on previous interests and make them new again. Andy’s mastery over various art forms seems to be his key driver for success and adventure.

“I am more a student of skill than of creativity. While some find art relaxing and joyous, I find it challenging.”

During isolation he joined a Facebook caricature group and took up the challenge of creating a new digital caricature every day. His love for this artform goes back to 2010 when he was asked by friends to draw Kevin Rudd and Tony Abbot. Previously he had drawn various figures for fun; however, this was his first serious attempt, and this inspired him to continue drawing other prominent figures.

Andy’s caricatures vary almost as much in form as his artistic practice does. Picutres by Andy Dolphin.

In the past 18 months, he has returned to sign art, the craft of practicing signwriting as an artform. This interest began in the 80’s, where he taught himself airbrushing with a tiny spray gun and opened a business, decorating the sides of vans with bright murals of snakes, heroines and dragons. This led to a signwriting apprenticeship in his mid-20s, which expanded into a practice which he maintained professionally until about 30 years ago – when signwriting went digital. Andy lost interest at this point, feeling that digital technology allowed anyone to make a sign – crushing the artform. However, his passion for this form has recently returned and he’s taken to creating hand-painted novelty saws from old carpentry equipment, which he fondly refers to as ‘man cave art’. 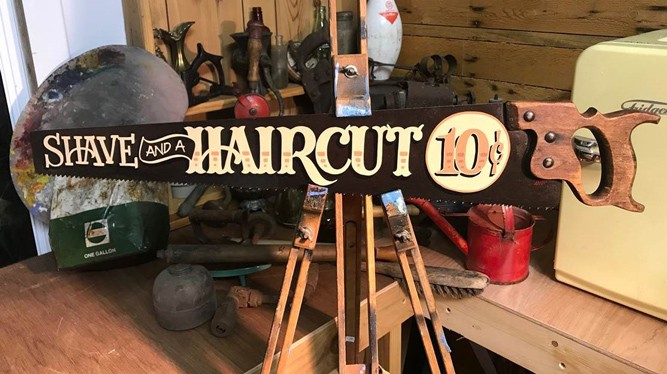 Some of Andy’s work with recycled saws. Picture by Andy Dolphin.

In 2018 Andy was hired to produce signs for the upcoming movie RAMS, which was filmed in Mount Barker. This project rekindled his love of signwriting and his interest in creating distressed signs, which he artificially ages with coffee and sandpaper, mixed in with a bit of good-old bashing, courtesy of the sticks and rocks near his work area.

Andy’s foray into art for films continued in H is for Happiness, filmed in Albany in late 2018. The director specifically commissioned a work in the Fauvist style – which utilizes bold expression and bright colours. He was also hired to undertake set finishing, where his talents were put to work aging and distressing props, to give the film’s scenes a lived-in feel.

Andy is also interested in heritage typography, which combines principles of vintage design and calligraphy with a heavy focus on elaborate typefaces. This comes from a career as an art director and graphic artist for advertising agencies in Perth for both print and TV. This was in the days prior to computers when artists drew and illustrated advertisements by hand. 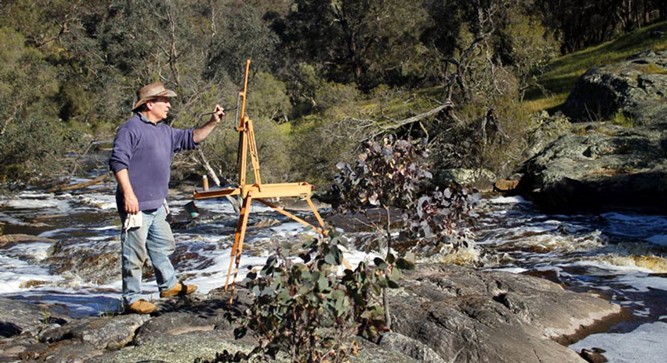 Andy at work, down by the river. Picture supplied by Andy Dolphin.

He has always had a fondness for drawing stemming back to childhood. As the fifth child in the family his parents would entertain the children with colouring in books, how to draw books and how to paint books and crayons to play with. This led to his interest in drawing, painting, and animation from a young age.

Most recently Andy has formed an obsession with teaching himself hand-skills woodwork using old hand tools with no machines or electricity. So far, he has made a mallet, a wooden box to store paint brushes in and is currently using old pallets to create benches for his new art studio.

After living in Perth for so long a move to the country in 2003 was a wonderful reprieve from the noise, busyness, and traffic of the city. He lives on five acres on the edge of Mount Barker. Even though Andy finds it trickier to receive as much exposure in the regions, the benefits of being surrounded by paintable materials from mountains to the ocean just out his front door, far outweighs the former.

The future is very exciting for Andy who has recently finished up at the Great Southern Weekender newspaper in Albany, as Production Manager for the past 16 years. He is thrilled to be focusing more on his art and welcomes commissions across all the various artforms he practices.

Andy provides demonstrations and workshops for oil painting, drawing, animation, and the fundamentals of landscape painting and is keen to work with local communities. For more information or to contact Andy check out his webpage here and enjoy reading his art blog here. View his socials here – Facebook, Youtube.