Opera at the Mill returns for 2020

This story was submitted by The Shire of Serpentine Jarrahdale. We love sharing stories from the sector. If you want to find out how to submit your own stories, take a look at the submit your story page. We can’t wait to hear from you!

There’s nothing quite like the drama of the opera to highlight beautiful regional WA locales, and now the old singing of saws will be swapped for serenades under the stars.

Opera returns to the historic timber town of Jarrahdale with West Australian Opera artists Naomi Johns, Sam Roberts-Smith, Fiona Campbell and John Longmuir (Tenor) set to bring their incredible talents to bear on Saturday, 7 March for Opera at the Mill.
The town of Jarrahdale is typically known for its timber, though it has a rich history of opera, with The Opera Bouffe Company paying two visits to Jarrahdale in 1885 before returning in January 1886.

Following the success of last year’s event, Opera at the Mill 2020 is set to be bigger than ever with four world-class singers, led by conductor Christopher Van Tuinen set to make it a spectacular night to remember. 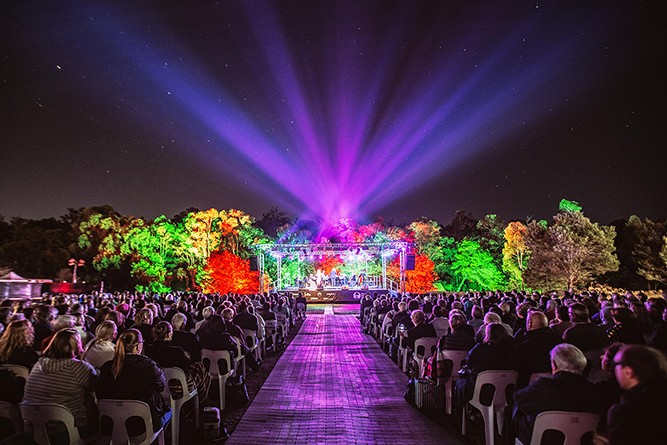 Opera at the Mill 2019 was quite the show, and 2020 plans to deliver just as much incredible music. Picture by Stu McKay.

Soprano, Naomi Johns has performed with Opera Australia, The Australian Ballet, Australian Shakespearean Festival as well as state and regional companies, and has appeared on ABC National Radio and television as a principle artist.  Since Naomi’s return to Perth in 2015, she has made her principal debut with the West Australian Symphony Orchestra under the baton of Asher Fisch and commenced working with West Australian Opera on a regular basis.

Australian baritone Sam Roberts-Smith is a graduate of the Western Australian Academy of Performing Arts and is widely recognised as one of the most exciting and talented performers of his generation. He is the winner of numerous prizes and awards including the Marianne Mathy Scholarship: The Australian Singing Competition, Joan Sutherland Society of Sydney Award, Deutsche Opera Berlin Award: The Opera Foundation for Young Australians and various prizes at the Paris Opera Awards.

Fiona Campbell, Mezzo Soprano, is one of Australia’s most versatile and beloved classical singers – the winner of the national Limelight Award for Best Solo Performance 2011 and vocal winner of the ABC Young Performer of the Year Award and the ASC Opera Awards. Campbell sings regularly as a principal artist with all of the major ensembles and orchestras in Australia and with Opera Australia, Opera Queensland and WA Opera.

One of Australia’s most acclaimed young tenors, John Longmuir was born in Edinburgh, Scotland but has gone on to claim awards in all of Australia’s major competitions, including the prestigious Herald Sun Aria, the Opera and Arts Support Group Scholarship and the inaugural Joan Sutherland and Richard Bonynge Bel Canto Award.

Opera at the Mill is presented by the Shire of Serpentine Jarrahdale with West Australian Opera. If you’re interested in going to check it out for yourself, you can grab tickets here.