This story was submitted by a member of the regional arts sector: Jessie Spring. We love sharing stories from the sector. If you want to find out how to submit your own stories, take a look at the Submit Your Story page. We can’t wait to hear from you!

My given brief was to create a semi-photorealistic interpretation from an old sepia photograph of Bates Street Merredin, circa the 1930s. I thought, this would be a wonderful opportunity for me to set myself a challenge, learn and expand my art practice. I wanted to give to my community in some way and for me, creating a mural to brighten our town and reflect pride in our history was my way of doing so.

I studied old photographs and listened to historical stories told to me by the locals of Merredin. I visualised in my mind how I would like the mural to present and sketched a drawing of the proposed mural design. My vision was, for the mural to resemble an old sepia photograph with spot colour, much like an old postcard illustration. I needed to focus on all the light and dark values within the sepia photograph, therefore my chosen dark hue was good old-fashioned, “Mission Brown”. I thought about how appropriate this hue was as I’m sure back in the day there were many fences and posts painted with Mission Brown. 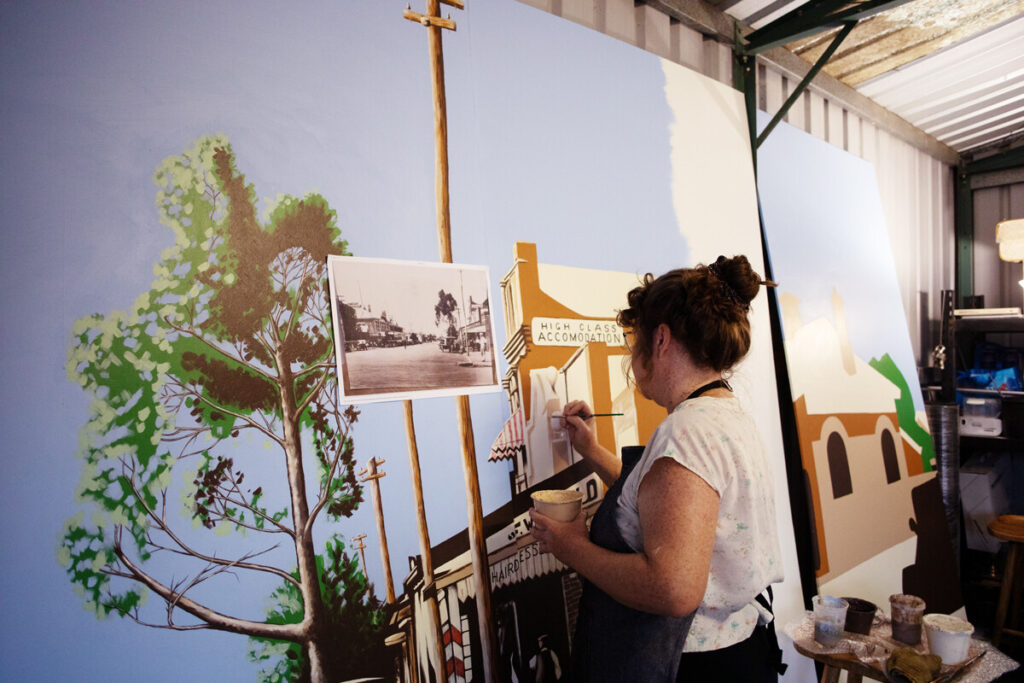 Learning the process of painting a large-scale mural has been a rewarding experience for an artist such as myself who usually works small-scale. It was great to get out of my comfort zone and my studio and learn new skills.

For the Meridian Regional Arts 2022 mural, I was not to paint directly onto an existing wall but onto five large plywood panels which would later join much like a jigsaw puzzle. Meridian Regional Arts wished to encourage engagement within the arts by inviting people from the community to assist with painting the mural. This was something we felt was important as it would give a sense of participation and achievement to everyone involved. The question was, how do I make a photorealistic mural not complex for the community to paint? The solution was to break the design down into simple block shapes of colour for the community to paint and then I would later complete the mural with the detailing.

The community mural paint day was a rewarding experience for all who were involved. It was humbling to see people from all walks of life and ages pick up a paintbrush and a pot of paint and have a go painting our mural. I describe the mural as ‘our mural’ because the mural is not only my achievement, but it is also the achievement of the community and the hard-working committee members of Meridian Regional Arts who wrote the grant applications that funded the mural.

I would have to say it was obvious by the smiles, laughter, and conversation that a community mural paint day brings much enjoyment to all involved.

After the community paint day, I spent the next few weeks working from the Meridian Regional Arts Shed, where they conduct various art and craft workshops with the community. The shed was situated next to a granite outcrop with natural bushland, therefore it was a peaceful place to create whilst listening to many birds singing around me. Working from a selection of old photographs was the biggest challenge as the quality of certain elements was somewhat subdued. I had to do plenty of suggestive painting, concentrating on areas of light and dark contrast. I painted the entire mural by eye, using these photographs as a reference. It was discovered from the Bates Street photo, the word ‘accommodation’ was incorrectly spelled, ‘accomodation’ with a missing ‘m’, therefore it was decided to keep it that way, to keep the mural as authentic as possible. 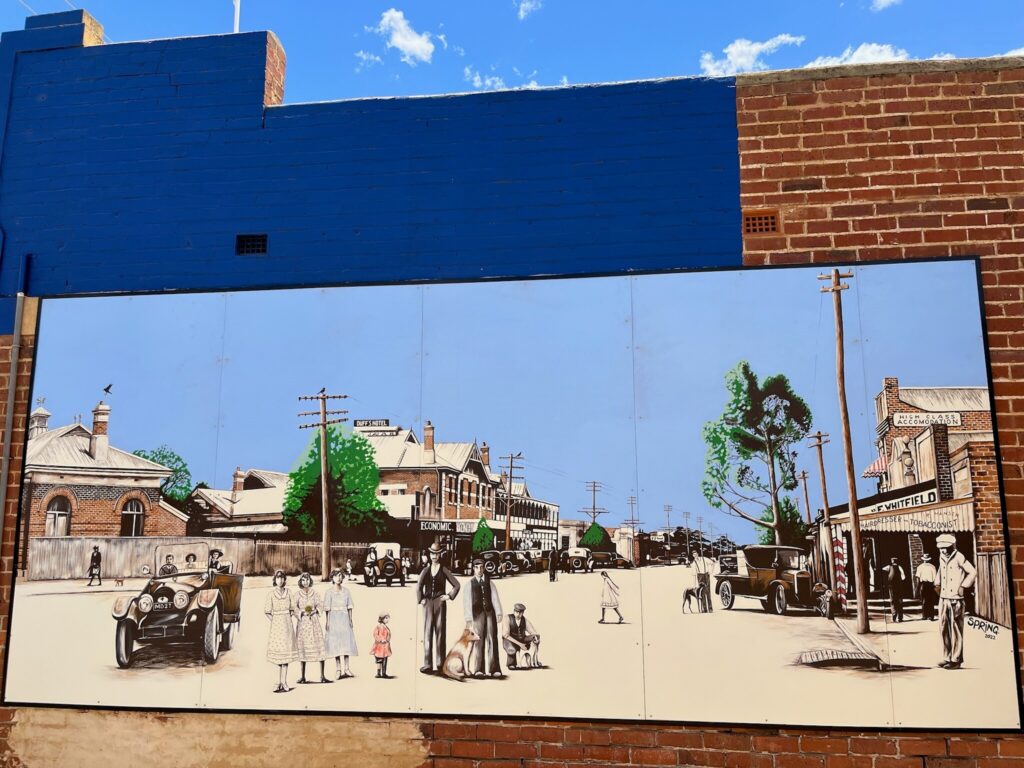 I had to sharpen up my skills in perspective painting to create a sense of depth and space within the street scene and to ensure elements such as figures of people, and telegraph poles were in proportion. As the mural progressed I decided to add small quirky elements such as the crows and a nest in the tree. Although the mural is to be viewed from a distance, I also wished for the viewer to walk up to the mural and explore small details which tell a story. The little ginger cat following the lady down the street was inspired by a cat who often visited me at the shed. The car number plate, MD 27 was the original plate number of Mrs. Atkinson’s vehicle, the original owner of the Atkinson’s building where the mural is now placed. The reference photos were taken from different time periods therefore, I altered the clothing and hair styles of the figures to be reminiscent of 1930s fashion. Never have I lived in a town where people love their pet dogs as much as Merredin, therefore including a few dogs within the scene was a must.

The final mural was installed for public display on Tuesday 13 December 2022. You can find it on the east-facing wall of the Atkinson’s shop building, on Barrack Street Merredin, Western Australia.

A particular attitude toward something; a way of thinking about something.