This story has been submitted by Stuart McMillan from Creative Corner, a Hub organisation in the emerging Regional Arts Network.

Earlier this year, South West arts organisation Creative Corner was approached by the Shire of Augusta–Margaret River about a potential youth arts mural project. The Shire wanted a young emerging artist to lead the process.

Creative Corner Coordinator Stuart McMillan knew just the guy for the job. He was soon on the phone to Cowaramup/Wooditchup based artist Kaiman (Kai O’Reilly) to discuss the idea. 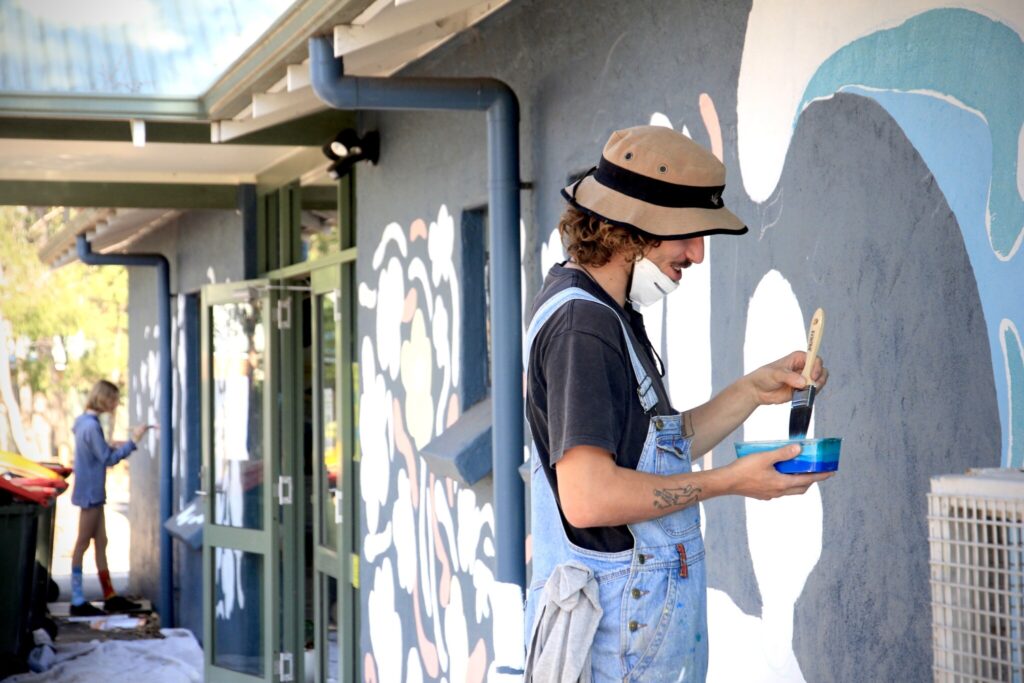 Kai had created a few murals before and was very interested in taking on a new challenge.

“I work across lots of different mediums, and public/street art is one of those. I was so excited about this project as I’ve been inspired by many mural artists, for example the work of (local Margaret River artist) Ian Mutch is hugely inspiring to me. I would love to follow in their footsteps,” Kai said.

Now that Kai was on board with the project, the idea had wings and the planning process could begin.

“After Creative Corner got me in contact with the Shire, we all met (the Shire, Creative Corner and myself) to discuss their vision. Together we landed on the idea of running workshops with the young people so they could develop their skills, which they could then use to help design and paint the mural.”

Although Kai had never done something of this scale before, it was a natural career progression for him and was more than keen to give it a shot.

“I have mentored people on a one-on-one basis but never run community workshops like this before. Stu and I met regularly to design the workshops and worked together to make sure that what we were doing was going to have the best outcome for everyone involved. I felt confident knowing that I had the support of Stu and Creative Corner along the way.”

Kai ran two workshops in April. In the first workshop, Kai shared his illustration skills and talked about how he turned his love of graphic art into a viable career. The second workshop focused on the co-design of the mural.

“I invited all the young people to sit around the table with paper and markers. I then asked – what are the things you care about? How do you want to be seen?”

Some strong themes that arose included keeping mentally healthy and the importance of caring for the environment.

“I would ask them to visualise what that looked like and draw it. These ideas were incorporated into a final design that we all contributed to.” 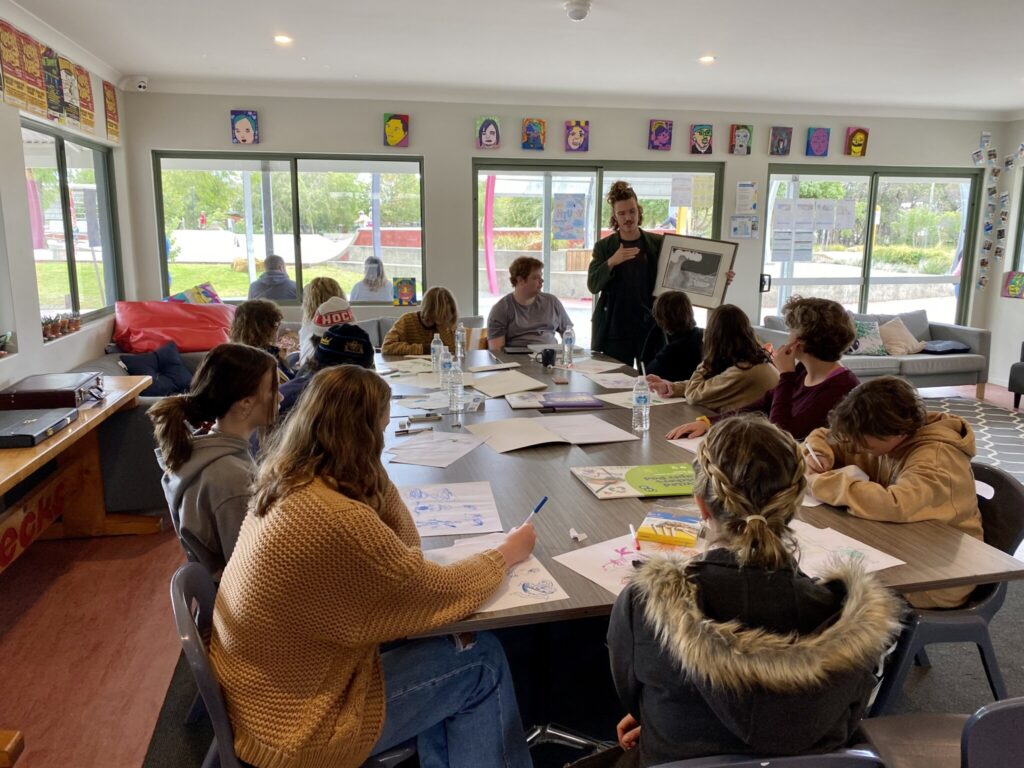 Over the course of a week, a snap lock down and dodging rain showers, Kai completed the mural with assistance of budding artists from the Margaret River Youth Advisory Council committee. The resulting mural, titled Wave Garden, encourages young people and adults alike to connect with a flourishing eco system and healthy mental space.

By promoting a positive mental space and symbiosis with natural world surroundings of Margaret River, this colourful artwork is something the community can reflect on and practice being more connected to both themselves and nature on a daily basis.

Creative Corner is one of the Hub organisations in the Regional Arts Network. Their role as a Hub includes facilitating opportunities for artists and creative workers within their community. Another key part of their role is to encourage local government support for arts and culture, through advocacy and network building.

Following the delivery of the mural project, James Shepherd, Director Corporate and Community Services at the Shire of Augusta-Margaret River shared the importance of building community connection, engaging local talent, and offering skills development for youth. 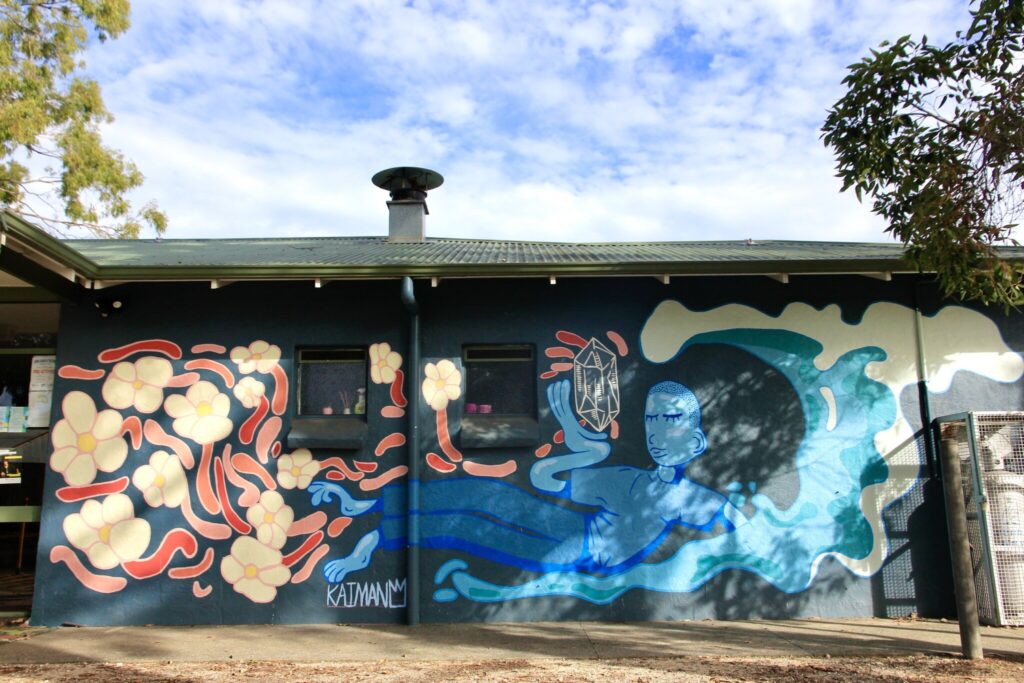 Kai has also recognised the importance of making local connections and how this can help him develop further as an artist.

“The mural is a representation that if we all work together, listen to one another and show compassion, our community can flourish. The beautiful thing is that’s how this project all came about – through collaborating with Creative Corner, with the Shire, and with some amazing young people. Everyone who was a part of it can walk past now and go I helped with that.

I’m really honoured to have facilitated the design and painting of this mural. But not only that, I have now built up the skills to run community workshops with young people. I really enjoyed the process and I’m hoping to incorporate more community art projects into my practice in the future.”

The Wave Garden mural can be found at the Margaret River Youth Precinct, Gloucester Park.