“My hobby of sketching dresses continued, and I looked at it as something unique I could show the world. Translating my knowledge of my Country, my culture, and my language into my dresses just like a canvas. Telling the story of who I am, and where I come from while making someone feel uniquely beautiful.”

Letisha Shaw is a Gooniyandi/Ngaanyatjarra Designer who grew up on her father’s Country just outside of Fitzroy Crossing in the remote Kimberley region and spent her childhood learning Gooniyandi language and culture from her Grandparents. 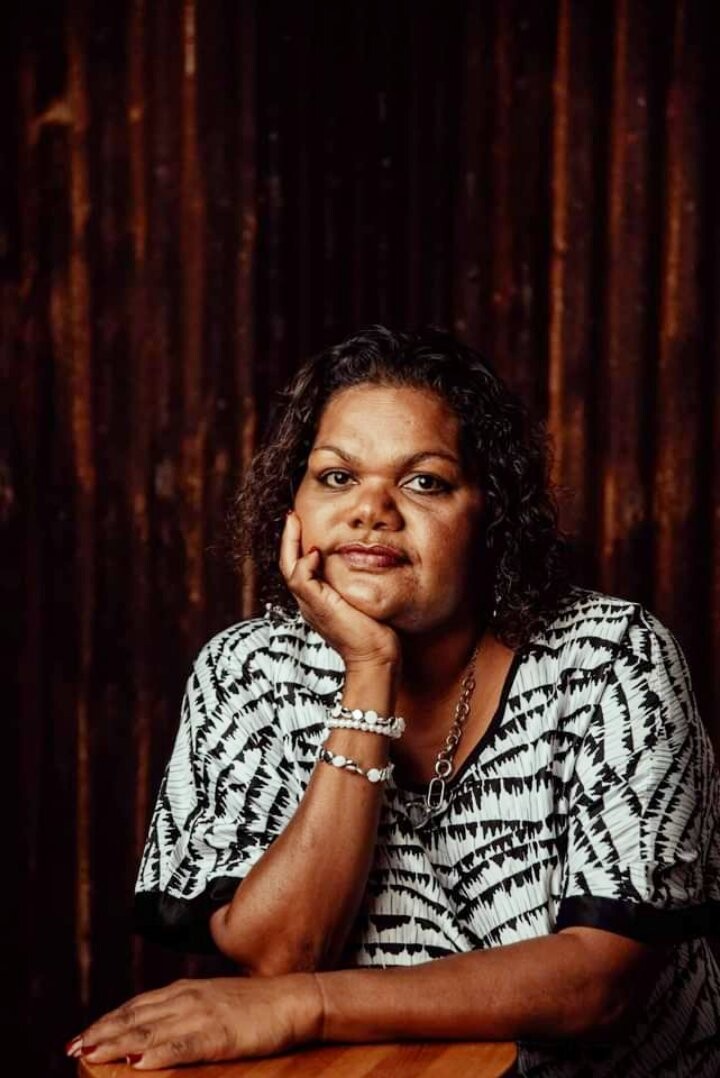 Growing up Letisha fondly remembers her grandparents taking her and her siblings camping down the river to teach them “the way of Country”. They would spend days hunting, fishing, gathering native foods, and learning how to survive in the bush. All of which inspire her work today.

Letisha’s mother’s side originates from Warburton Ranges on Ngaanyatjarra Country, where her grandmother Evellyn Davidson was born. When her grandmother was moved as a child, her great grandparents walked from Warburton to Mount Margaret Mission, 20km south of Laverton on the traditional lands of the Wongatha people, to be near their children.

“My grandmother moved to Mount Margaret Mission back when the welfare system took children and placed them into mission, so my great grand parents Claude and Elsie Davidson had to walk all the way to Mount Margaret Mission to be close to their children. Many years passed and my great grandparents, grandmother and siblings never went back to their home.”

Later, her mother’s family would settle in and around Coolgardie and Kalgoorlie where Letisha would sometimes spend her school holidays travelling to see family. Now an adult, Letisha has settled in Coolgardie to raise her own family.

As an artist, Letisha draws upon childhood memories and culture as inspiration. She uses the knowledge taught to her by her grandparents, images of her Country, as well as the bush food they still collect and consume today. 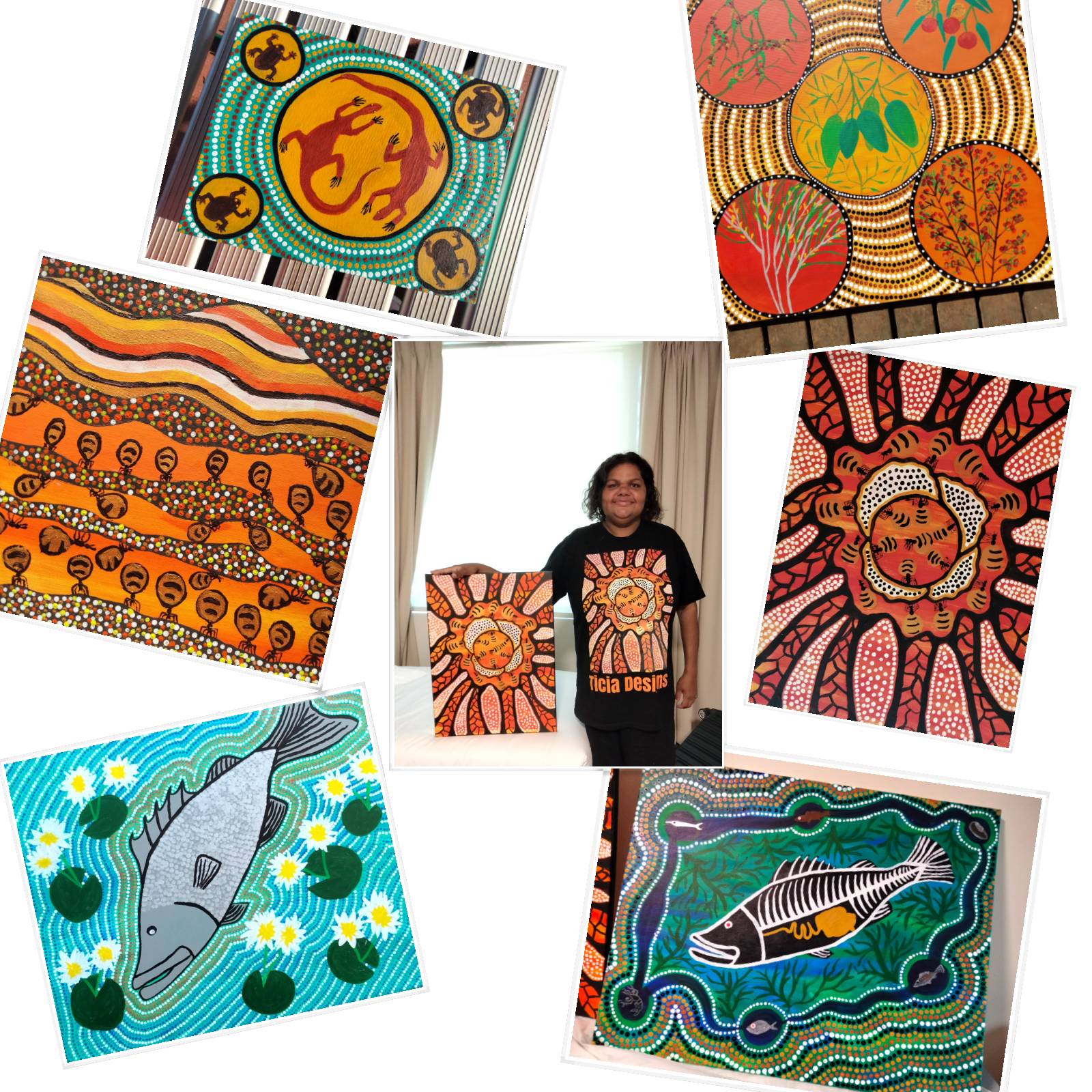 Some of Letisha’s canvas artworks. Supplied by the artist.

As a little girl, Letisha dreamed of owning a ball dress. Unfortunately, living in a remote area made that dream difficult – it was hard enough to find basic clothing options and her mother would instead sew shorts and shirts for her to wear.

Instead, Letisha began to sketch and imagine what sort of dresses she wanted to wear. Then, she began adding her own Indigenous designs to her sketches. Her hobby blossomed, and soon she was filling sketchbook after sketchbook with her own unique designs.

“I still have my portfolio with all my sketches I done when I was 13 years old. I’m surprised I kept them for so long. I’m 40 now, and I’ve still got them! Now when I look at my work it’s improved. I look at myself and my work and I think it’s looking better than it looked before.”

Under her mother’s guidance, Letisha learned to sew – starting small with a simple bag, followed by easier shorts and shirts patterns. But the more she created, the more her interest grew and the more she wanted to turn her designs into real pieces. 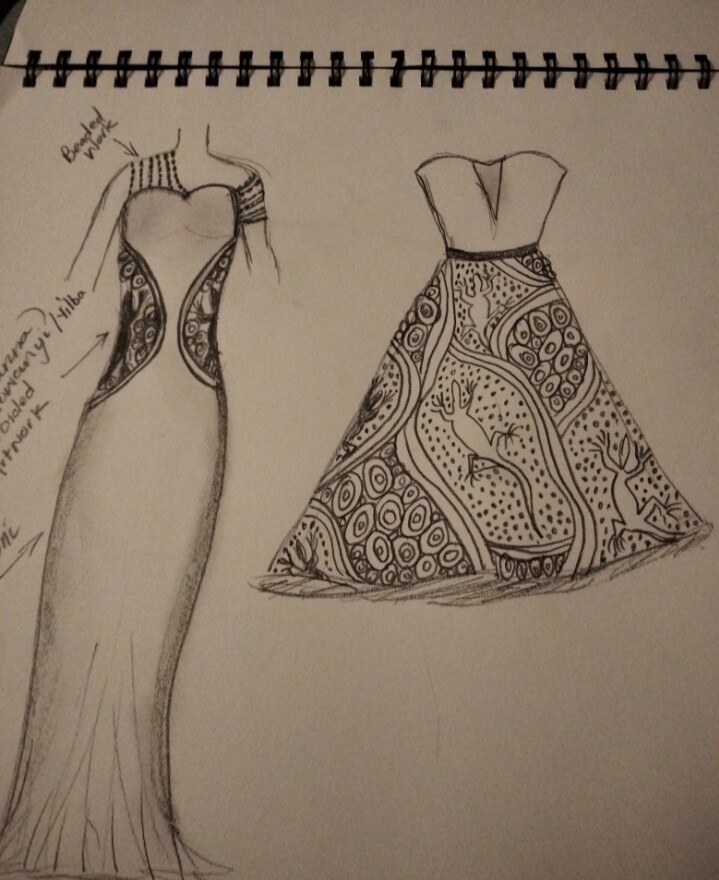 Image: Some of Letisha’s Sketches. Supplied by the artist.

While building her skills at the local Women’s Resource Centre, Letisha’s passion for design was noticed by Centre Manager, June Oscar AO. June helped set her up with an internship in Melbourne working with clothing company The Ark.

In Melbourne, Letisha sat alongside skilled designers and learned how to create patterns using a computer and how to sew using industrial machines. She hadn’t known those technologies were available and could finally see herself reaching whole new levels in her own work.

Taking her new skills back home, Letisha started working on turning her designs into functional pieces. She attended a Fashion and Textile course in Kalgoorlie, learned how to silk-screen and started putting her canvas artworks onto fabric. Everything she does, is inspired by her upbringing and childhood.

“My grandmothers used to do a lot of bead work, making jewellery. Necklaces with beads, like bush nuts and gum nuts. They also did basket-making, which they taught me. Now, I do canvas work, painting, and jewellery like my grandmothers used to do. My acrylic painting on canvas is modernised, more colourful but I do the same things with my dresses as I do on canvas. They reflect the same things – my knowledge, what I’ve picked up from childhood to being an adult over the years.” 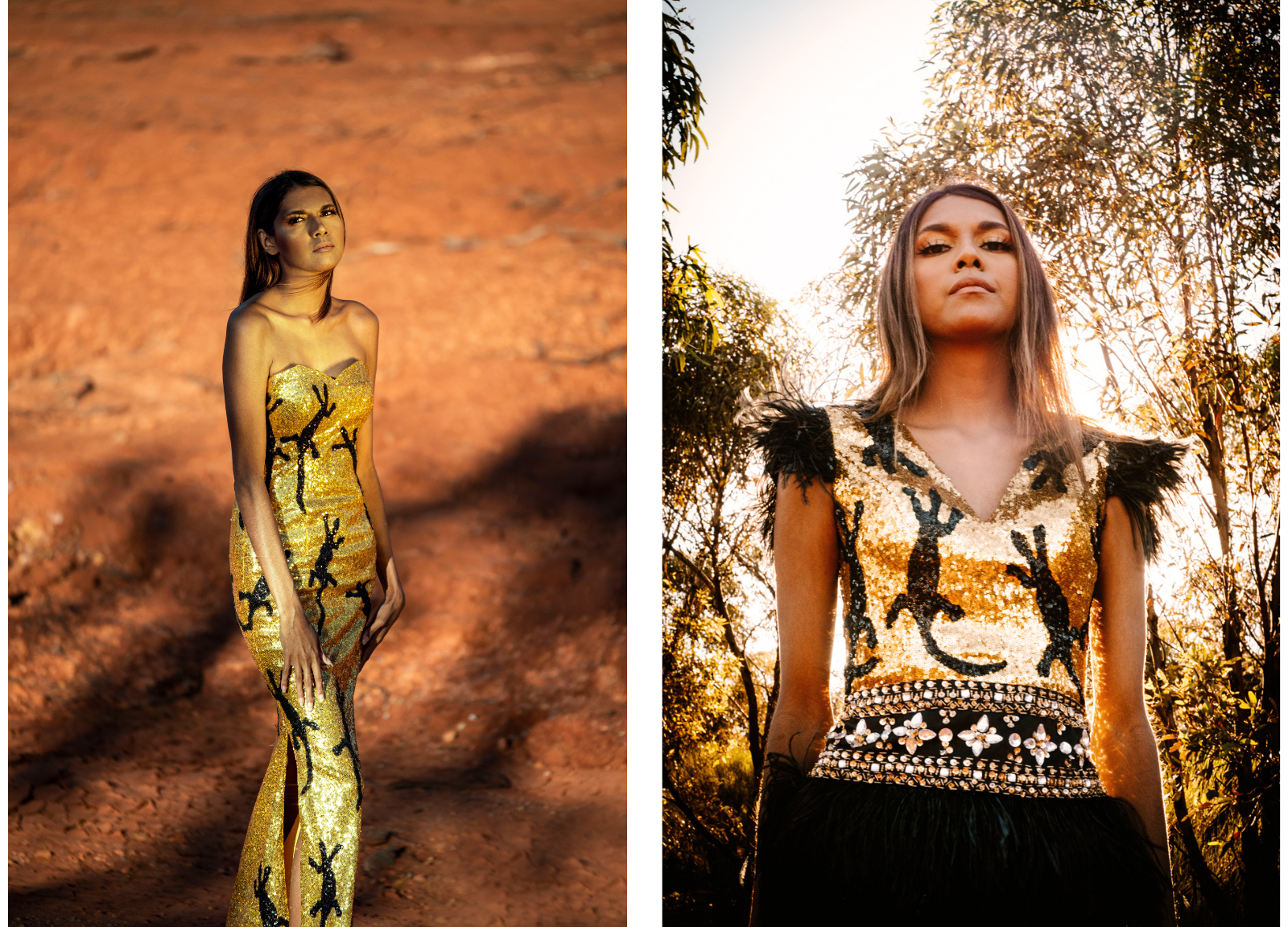 Something Letisha has always wanted, since she was a little girl, was to share her culture and make people feel good about themselves. Her dresses are now doing exactly that – inspiring people, and helping young girls improve their self-esteem and confidence.

In 2007, Letisha created her first dress for a NAIDOC Week competition in Kalgoorlie and was given the chance to present her design to the public on a catwalk. Excited, she quickly purchased fabric, got on her sewing machine, and created a yellow dress embellished with her own artworks.

“I asked my cousin to model and when she came out on the catwalk people were clapping and shouting as if she was Naomi Campbell. It was the first-time people had seen something like [my design] and I thought if people liked it, I should keep doing it! My cousin was over the moon. She felt confident and good about herself. That’s the kind of thing I want to give, with these young girls wearing my dresses.”

Letisha soon got the chance to help other girls feel the same way her cousin had. While working back at the Women’s Resource Centre, Goolarri Media came looking for young girls to enter Kimberley Girl. Manager Kira Fong was blown away by Letisha’s sketches and designs and asked her to help design dresses for the girls to wear.

In 2010 and 2011 Letisha designed dresses for Kimberley Girl, an event where young girls come together to do workshops, develop leadership skills, and build their self-esteem and confidence.

Creating all the designs from scratch, Letisha says the Women’s Resource Centre could only offer her cotton fabrics to use so she had to get creative in her designs – but she surprised even herself with the finished works, and the girls all looked beautiful up on the catwalk.

Unfortunately, she was unable to do Kimberley Girl again in 2012 after a fire in her community destroyed the dresses she was working on. Letisha found herself forced to slow down, but never gave up. 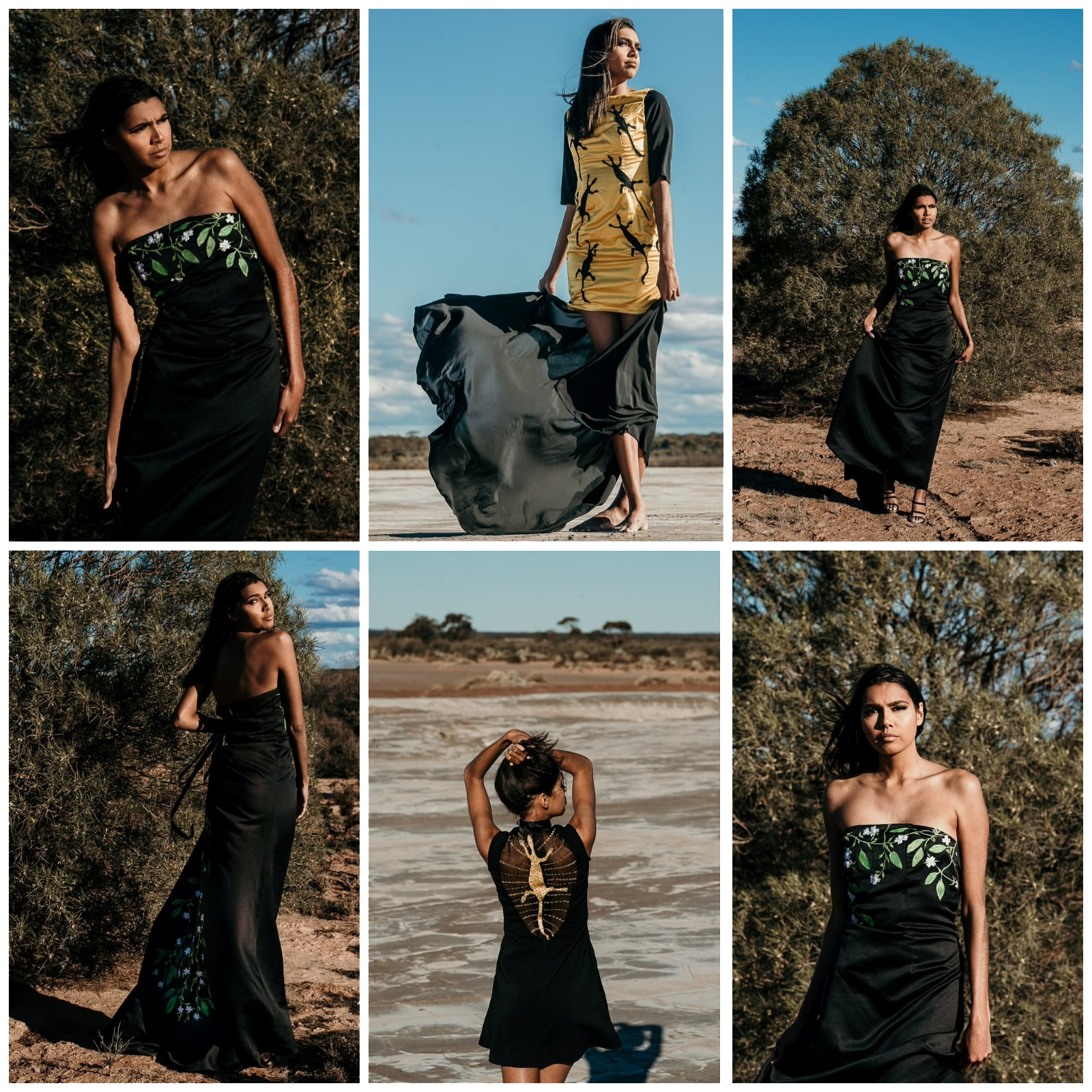 After a bit of a break, due to some health issues and a move to Coolgardie to raise her three kids, Letisha is back, better than ever, designing dresses for Goldfields Girl (a continuation of the successful Kimberley Girl), which will be held on 25 November.

You can find Letisha in her room every day working on her Goldfields Girl collection – which is primarily upcycled. Although upcycling is out of need for Letisha, who has continually encountered obstacles in accessing resources for her designs, she has never let that stop her.

Letisha explains that there are no fabric stores in Kalgoorlie and, while she can get cotton fabric at the local art and craft store, if she wants something else, she must order it or travel. Both of which are expensive and difficult.

Instead, Letisha has found op-shops are an amazing place to find nice fabrics. With the help of Artgold, she is collecting worn pieces from local op-shops and transforming the fabrics to give them new life… all while putting her own unique spin on them.

Inspired by her Elders, and her upbringing, Letisha is incorporating her homemade jewellery as part of her culturally inspired Goldfields Girl designs and hopes to finally get Ticia Designs into the public eye.

“I feel like my work is unique, not everybody is doing it. I’ve got my culture; it’s showing who I am, and I want that to shine through my work. I want people to know my culture, who I am. An Indigenous woman of Australia. I do have worth. I do have skills. I have talent, and I can rise to the same level of any other fashion designer.”

Letisha was nominated for Artist of the Month by her friend Margaret Ellen Burns, whom she thanks wholeheartedly for acknowledging and believing in her work.