This story was submitted by a member of the regional arts sector: Tim Hannah. We love sharing stories from the sector. If you want to find out how to submit your own stories, take a look at the submit your story page. We can’t wait to hear from you!

Cain, an instrument maker and reed instrument player, and Saegusa, a digeridoo virtuoso, are both members of the WA-based Musica Viva In Schools ensemble Eastwinds. From 28 October to 1 November they traveled to Kalgoorlie to run two residency programs with students, thanks to the support of AngloGold Ashanti Australia. During regular, daily sessions across the week they worked with students and teachers, instructing them in instrument making, improvisation and composition. 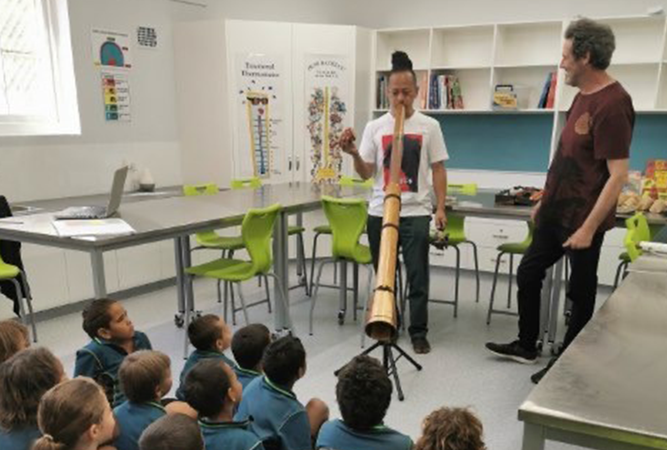 Workshops at East Kalgoorlie Primary School ran for an hour every morning and focused on working with Languages Other Than English (LOTE) students.

“The kids were engaged for the whole time. Our kids can’t listen for long, so there was a good balance of content and engagement that kept them interested the whole time!”

The program has been a boon for the school community. East Kalgoorlie has the lowest ICSEA rating (Index of Community Socio-Educational Advantage) in Western Australia and the residency has provided valuable opportunities for students interested in music and the arts.

“It’s really good to have something different in the school,” says Tanya. “Our music teacher has just left, so it’s great for the kids to get their hands on some instruments.”

“They really enjoyed it. It gets pretty loud in the classroom, but when Sanshi played the digeridoo the kids were mesmerised, absolutely silent, because they’ve never heard the instrument before.”

Eastwinds is a multicultural group that focuses on the character of sound through their educational and interactive performances. Cain and Saegusa brought this philosophy to the classrooms of Kalgoorlie for these residency programs, working with students to explore sound palates, improvisation and encourage deep listening. 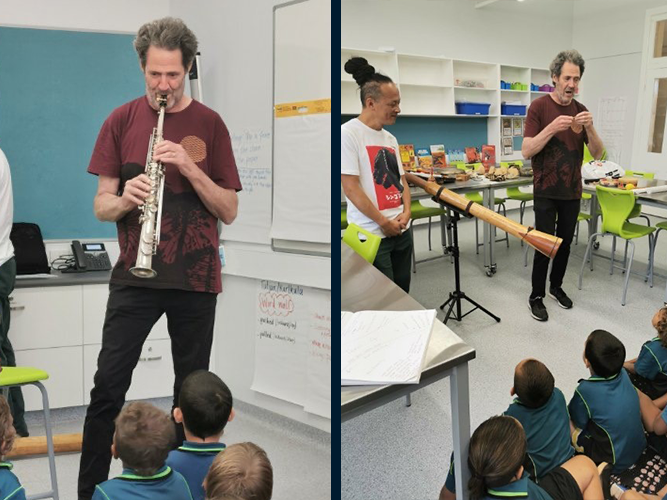 Every class created their own story through music, sound, texture, song and percussion. Teachers were encouraged to participate as well, learning valuable and fun ways to include soundscapes in their own classroom activities.

“We invite the students to create an imagined or real story,” explains Cain. “Whether it be from events in nature, an imagined encounter or a fantastical idea. Then we help create a framework for the students’ stories with, ideally, a beginning, middle and conclusion.”

Cain says improvisation and experimentation are an important part of this process, allowing students to test ideas and find creative ways to tell their own stories. This encourages students to work collaboratively, sharing their experiences and discoveries together.

“The classroom is a great place to start on this journey.”

At the end of the week students were given the opportunity to perform their finished compositions for their classmates, sharing their stories and sounds without the pressure of an all school performance. Similar workshops were run at North Kalgoorlie Primary School in the afternoons throughout the week.

Working with regional students in their home state is an important opportunity for the musicians.

“We think we’ve made a palpable impact on the schools we’ve visited,” says Cain. “Perhaps the students feel a greater sense of ownership when the musicians are from their own state. We think we set a great example being a group from WA. Hopefully it gives students something to aspire to, that music needn’t stop at school!”

During the week, staff from Musica Viva also delivered four violins to CAPS Coolgardie. The instruments were donated through the national Don’t Stop the Music campaign, which began with the ABC TV documentary series of the same name. The series followed the development of a new music program in Perth’s Challis Community Primary School, documenting the benefits music brought to the students and school community.