From the bush to the big city screen

The Faces of West Arthur Project may have begun as an exercise for the Darkan Photography Group to learn the methods of portraiture photography, but it has now journeyed all the way to the big screen at Yagan Square in Perth’s CBD!

Members of the amateur photography group were guided by local professional photographer Caroline Telfer in mid-2018 to take considered, full face portraits of members of their local community. 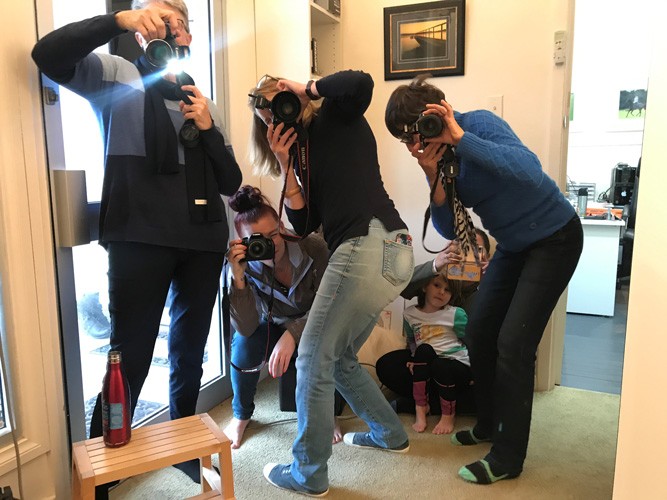 Heather Cook, Teresa Martin, Kerryn Chia, Karyn Buller (with cameras, left to right) and behind Kym Gibbs and her daughter Charlotte (with iPhone) – practising their photographic skills by taking a portrait of the photographer. Picture by Caro Telfer.

Caroline says this was a “confronting” task for some members of the photography group, to get up close and personal with each other in order to get the right shot required for the eventual display. Some members were able to practice in Caroline’s photography studio, learning to shoot with proper lighting for portraiture.

“The idea was for the [subject’s] full face to be looking at the camera, every picture was the same, with the only difference being the person.”

The final pictures were edited by Caroline, with the printing and mounting completed by Fitzgerald’s Photo Lab in North Perth.

The photos were presented as an exhibition in conjunction with the Shire of West Arthur’s Cultural Day on the 7th of September last year. The exhibition was displayed in the new Health and Resource Centre extensions and ran for approximately five weeks. This was possible due to the funding support from The Creative Grid (a cluster within the Regional Arts Partnership Program) the Commonwealth Regional Arts Fund, the Shire of West Arthur and the West Arthur Community Resource Centre.

With collaboration from Southern Forest Arts and Screenwest, an opportunity arose to have the exhibition projected onto Yagan Tower in Perth’s CBD. Caroline edited the images from the original display into six 10-minute video segments, which debuted on the tower on 18th of February, and will continue running over the next 4-6 weeks. 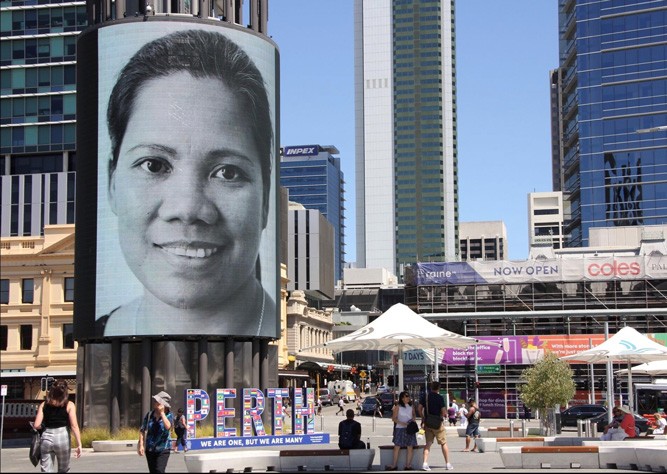 Lorela Gooding by Caro Telfer at the Digital Tower in Perth CBD.

This public display of the local West Arthur residents in Perth has brought a lot of joy and pride to the local community. There has also been a lot of interest shown by previous residents of the Shire, and friends of locals who have seen the photos in Perth.

Caroline says she had been contacted by one of the people who had seen their photo up on the big screen in Perth, thanking her for her efforts. He stated “I feel like a movie star. I feel like I’m very important” to which Caroline says the project “does affect people, and that is what exhibitions are all about.”

“It’s great that our tiny community can exhibit in the big city, and it must be interesting for people viewing a cross-section of our rural community.”

This story was written by Catherine Thornton, Regional Arts Hub Coordinator for ARtS Narrogin. Regional Arts Hubs is supported by the Regional Arts Fund, an Australian Government initiative supporting the arts in regional and remote Australia. You can read more about it here.

Portraits from the Faces of West Arthur project