To help send off the Sand Tracks tour this September, Country Arts WA Project Officer Tegan Morey and Marketing Assistant Jon Solmundson got the chance to travel into the nation’s heartland, where the central desert’s best musicians were honing their skills in preparation for the Bush Bands Bash in Alice Springs. Tegan writes about her experience.

We arrived in Ross River, about an hour out of Alice Springs, on 6 September for the kick off of Bush Bands Business – a four-day skills and industry development camp run by Music NT for the bands selected to play at Bush Bands Bash. 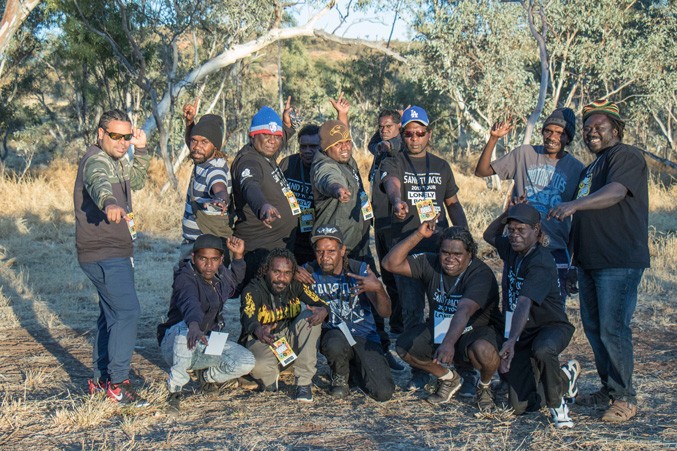 Lonely Boys and Irrunytju Band together before they play Bush Bands Bash. Photo by Jon Solmundson

The professional development program connects music industry mentors with Indigenous musicians from all over Central Australia and the Top End, providing an intensive program of workshops, rehearsals, industry skills and discussions to helps the bands playing in Alice that weekend prepare not only for the coming show, but to take their music even further once the show’s over.

Each year the two bands on Country Arts WA Sand Tracks tour, co-presented with Act-Belong-Commit, start their circuit headlining Bush Bands Bash, thanks to a partnership with Music NT, which means they also get to experience Bush Bands Business. This year Ngukurr community’s Lonely Boys and Irrunytju community’s Irrunytju Band were readying up for Sand Tracks. It was wonderful to get to know them, see them rehearse and see them mentor other bands. It was also an important chance for the two bands to get to know each other a little, before setting off together on a 3 and half week tour through the remote central desert.

Lonely Boys and Irrunytju Band immediately worked well together, with both bands having strong role-model positions in their communities and a passion for spreading culture and connection through their music. They began brainstorming ideas for the workshops they would be running in communities they visited along the tour – talking about how they could use each other’s music and knowledge to improve the experience for everyone. 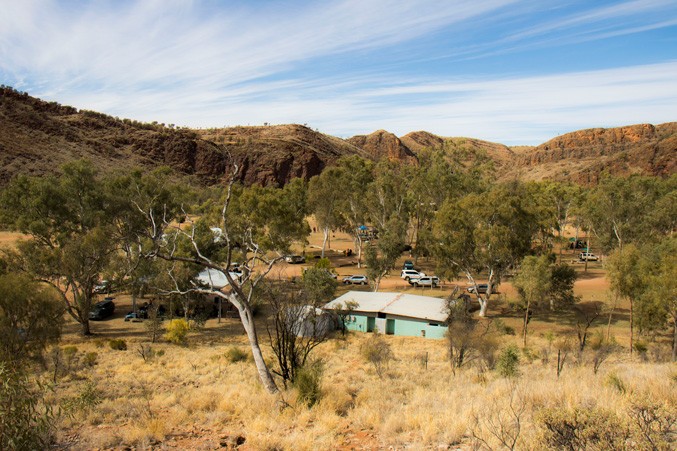 In between helping out in the kitchen (feeding over 100 people for 4 days is quite the challenge!), I was able to observe some of the sessions the bands participated in, from an information session on how to interpret a performance contract, to vocal coaching and instrument masterclasses. The bands had plenty of time to rehearse their songs and receive feedback from the mentors, and it was awesome to see such an amazing showcase of talent and unique sounds.

A personal highlight of the week was the dress rehearsal on the Saturday evening—with a full PA system and lights set up in the stage area against the backdrop of the Ross River valley’s natural beauty. The audience was made up of only the other bands and few campers, but it felt like a truly special opportunity to sit and listen to these amazing artists play out the slow evening sunset.

On the Sunday morning, we all packed up and left Ross River Resort to head into Alice, ready for the Bush Bands Bash concert later that night. After squeezing in a brief sound check, the Sand Tracks tour briefing and a quick rest, we went out to Telegraph Station for the culmination of the week. 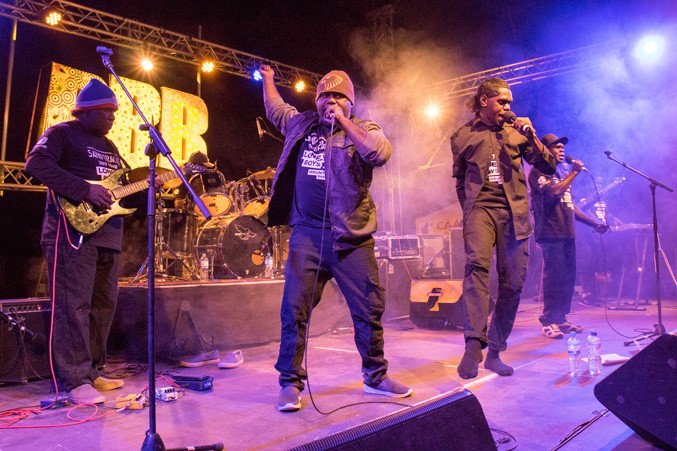 Bush Bands Bash brought in an audience of more than 2000 people, starting with families and picnickers enjoying the late afternoon sun. As the night went on the picnic rugs were packed up to make room for dancing, and the crowd’s growing enthusiasm grew more and more intense – finally bursting into an epic crescendo for the Lonely Boys crowd-pleasing banger “Drop It Down Girl” (which took out the Rock category in this year’s NT Song of the Year awards).

Overall it was a highly successful and smoothly-run week, thanks to an immense amount of work by the team at Music NT. Bush Bands Business and Bush Bands Bash provide a unique opportunity for remote Indigenous bands to network with other musicians and gain industry skills, and it was easy to see how much the 2017 bands attending were getting out of the sessions. It was a wonderful start to the Sand Tracks tour, with Lonely Boys and Irrunytju Band setting off from Alice Springs to visit five remote communities—Amata, Wingellina, Warburton, Warakurna and Kiwirrkurra. We’ll have more details for you on how those shows went very soon.