Talents great and small shine on stage at Boyup Brook

This story was submitted by a member of the regional arts sector: The Country Music Club of Boyup Brook. We love sharing stories from the sector. If you want to find out how to submit your own stories, take a look at the submit your story page. We can’t wait to hear from you!

Three multi award winning acts were chosen to perform at the 2020 Boyup Brook Country Music Festival in February – giving incredible solo performances with a big finale bringing that brought all the acts on stage together.

Carter and Carter, Jetty Road, and Anthony Taylor played their original songs and much-loved favourites, earning no small amount of love from the cheering crowd.

To add to the massive line up on stage the Country Music Club of Boyup Brook also ran an on line competition prior to the event, with the eventual  selected emerging artist (Hayden Sprigg from Muckinbudin, regional WA) winning the opportunity to perform live during this show, allowing for a few moments in the spotlight in front of a large audience. 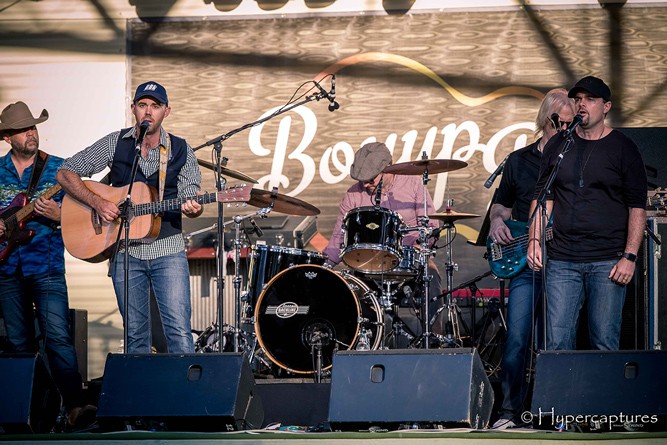 Hayden Sprigg performing with Eastern Line at the Taste of Tamworth. Picture courtesy of Country Music Club of Boyup Brook.

The West Australian Country Music Award Winners from the previous night and a few school children who participated in workshops also took the opportunity to sing with the finale song. The musical masters were playing just as many heart strings as guitar strings, with the showcase creating a wonderful moment of big smiles on the faces of the audience and parents alike and lots of audience participation.

This followed with a panel discussion focusing on how to have a successful career as an independent artist. The music industry panel session was fantastic and offered so much insight, knowledge and experience.

Additional outcomes included our visiting artists providing two school workshops earlier in the week of the festival. They had the children writing a song, putting the music to it and performing on each given day. They spent a whole day at Balingup Primary School and Boyup Brook District High School. Each session also included music teachers and staff who have praised them highly and did not think it could be achieved in 1 day. The Boyup Brook children wrote a song about living 25kms from town and how they all met in the middle at the Treehouse Cafe. The moment was truly wonderful, and even caught the attention of the GWN7 news team’s cameras. This followed through with invites to the children and their parents to come along on the Saturday to take part in the Taste of Tamworth Concert and sing a few songs on stage with Carter and Carter, Jetty Road, Anthony Taylor and the emerging artist winner. There was certainly much praise from the audience and the parents, and this special moment was a big highlight of the festival.

“The Boyup Brook Country Music Festival has been of great value to myself and The Eastern Line band. Without it we wouldn’t have had the chance to network with local and interstate acts, or industry people, and receive the benefit of advice and encouragement. The workshops run during the festival have provided a good deal of valuable information and allow emerging artists to meet and learn from established acts.

This year we had the opportunity to join Carter and Carter, Jetty and Anthony Taylor on the main stage which was great for our exposure. Afterwards we met dozens of country music lovers and sold dozens of CDs. The WA Country Music Awards are a great encouragement to local acts like us.

We left this year’s festival inspired to continue to write and record more songs and play more shows.”