Blazing talent in the Central Desert

I arrived at the Alice Springs airport on Saturday afternoon to find a very sun-kissed and sleep-deprived, Touring Officer, Carla Steele. We drove out to Ross River for the final evening of Bush Band’s Business, where 9 talented Indigenous bands were practicing for the legendary Bush Band’s Bash the following evening. We drove down dirt roads as the sun set behind the red ranges – our only companions wild horses and lizards.

Bush Bands Business is a skills and industry development camp for Indigenous bands, run by MusicNT. The three day workshops, rehearsals and discussions connect 80 of the leading Indigenous musicians and songwriters from central Australia. This year there were some pretty impressive mentors including Peter Garrett (Midnight Oil) and Brian Ritchie (Violent Femmes). Our awe-inspiring Sand Tracks bands, Desert Hip Hop and Lajamanu Teenage Band were two of the lucky bands to participate in this incredible camp.

As we arrived in Ross River, we could hear the musicians in the distance. We walked over to the rehearsal stage to find a few of the Desert Diva’s practicing their performance. We learnt that this song was dedicated to the singer’s mother, who sat near the edge of the stage with her young children. It was such a welcoming, heartfelt song that set the mood for the following few days.

The next morning, we set off to Telegraph Station in Alice Springs for the Bush Bands Bash sound check. Our two Sand Tracks Bands tested out some tracks on the sunny stage. The excitement was buzzing around the park – just like the flies that Carla unfortunately swallowed! We returned to our car to find a flat battery, so Sand Tracks Tour Manager-life-saving-jack-of-all-trades Mark Smerdon towed us out of the car park and back on track! 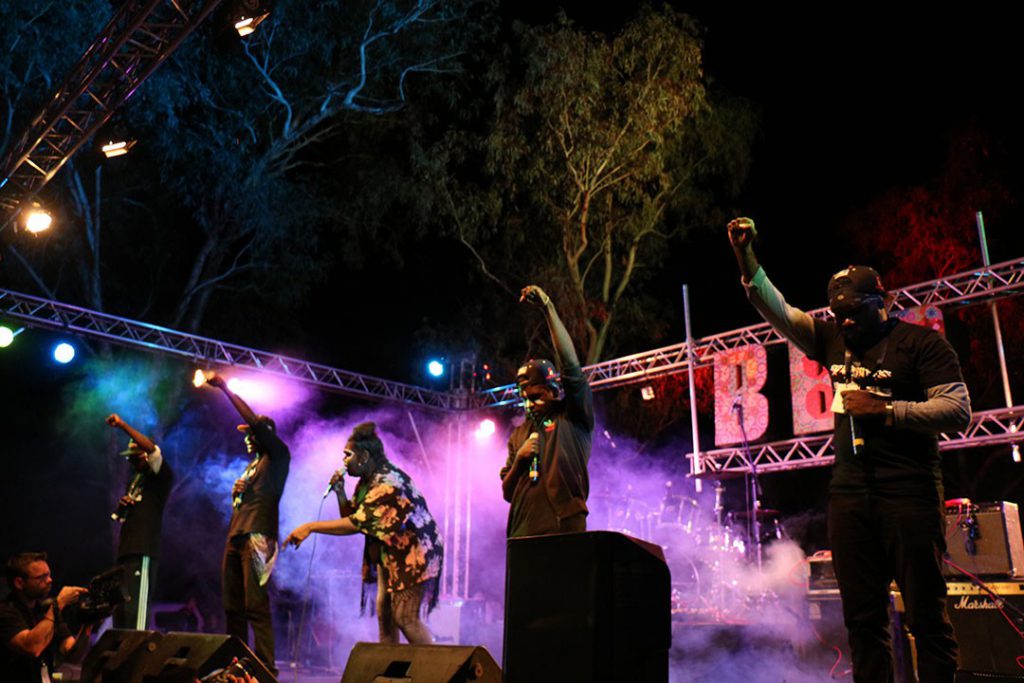 The Bush Bands Bash was an incredibly successful evening, with 9 talented bands and over 2,000 audience members under the picturesque starry sky. Desert Hip Hop and Lajamanu Teenage Band gave amazing performances – measured by the sound of young girls squealing in the crowd! It was such a wonderful and encouraging start for our tour. With big hugs we parted on a high note, knowing the bands would bring such joy to following five communities, Kiwirrkurra, Warburton, Warakurna, NG Lands Festival and Amata as part of the 2016 Sand Tracks tour.