Sita Bennett’s love of the arts began at a very young age, making plays and homemade movies with her siblings and cousins. Despite feeling shy, acting was always a place where she felt free to express, and storytelling always felt natural. 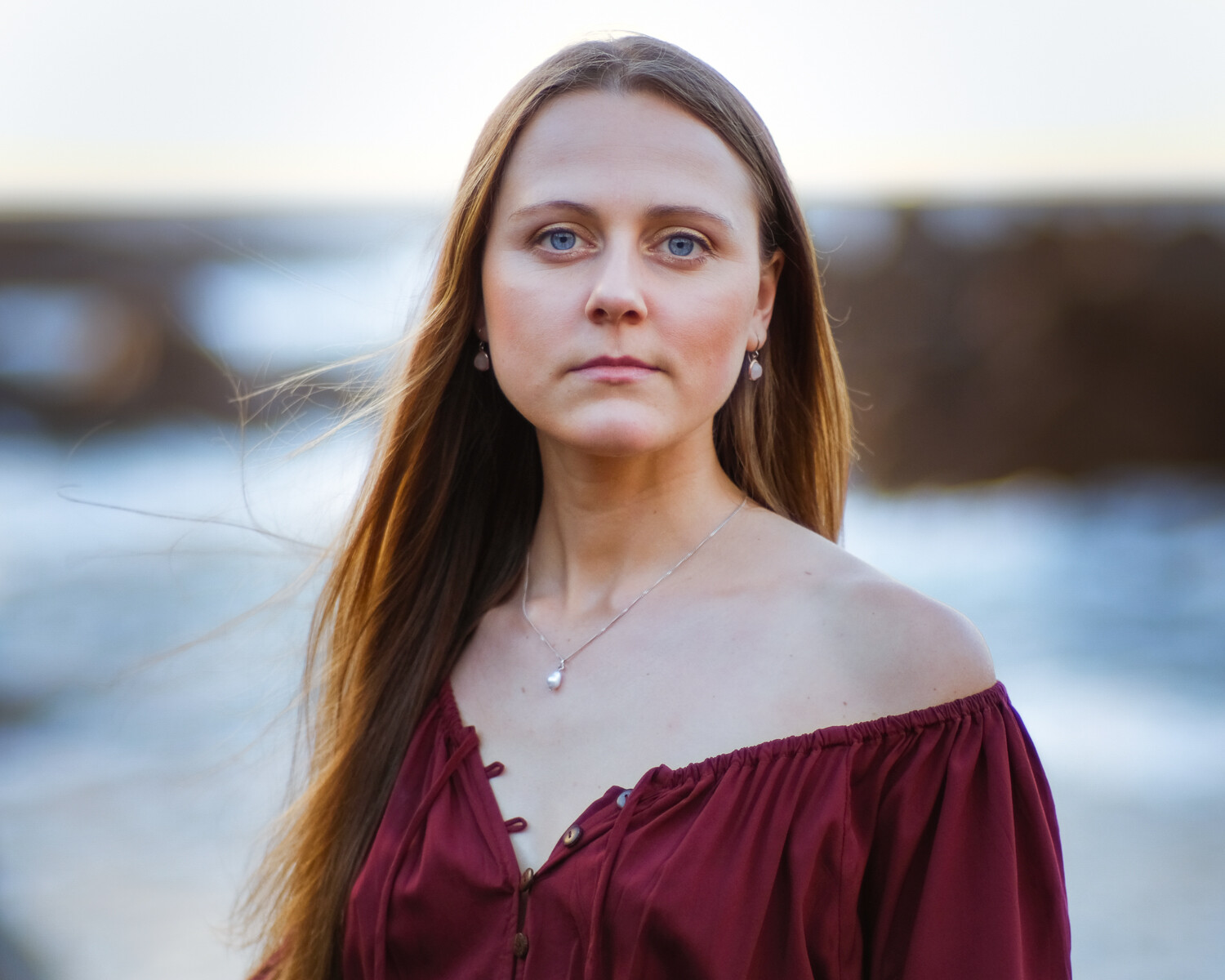 Growing up on the coast of Margaret River, Sita would often journal her experiences and feelings. She had an appreciation and love for the natural environment around her and felt the need to explore a deeper connection with the universe.

“I was curious and observant about the world. I found a way to explore and express myself without getting overwhelmed with all the questions.”

Writing felt natural to her – but she never thought about pursuing it professionally, instead focusing on acting. To her, acting seemed more possible, it seemed more exciting, and there were more possibilities and opportunities around for her to explore. 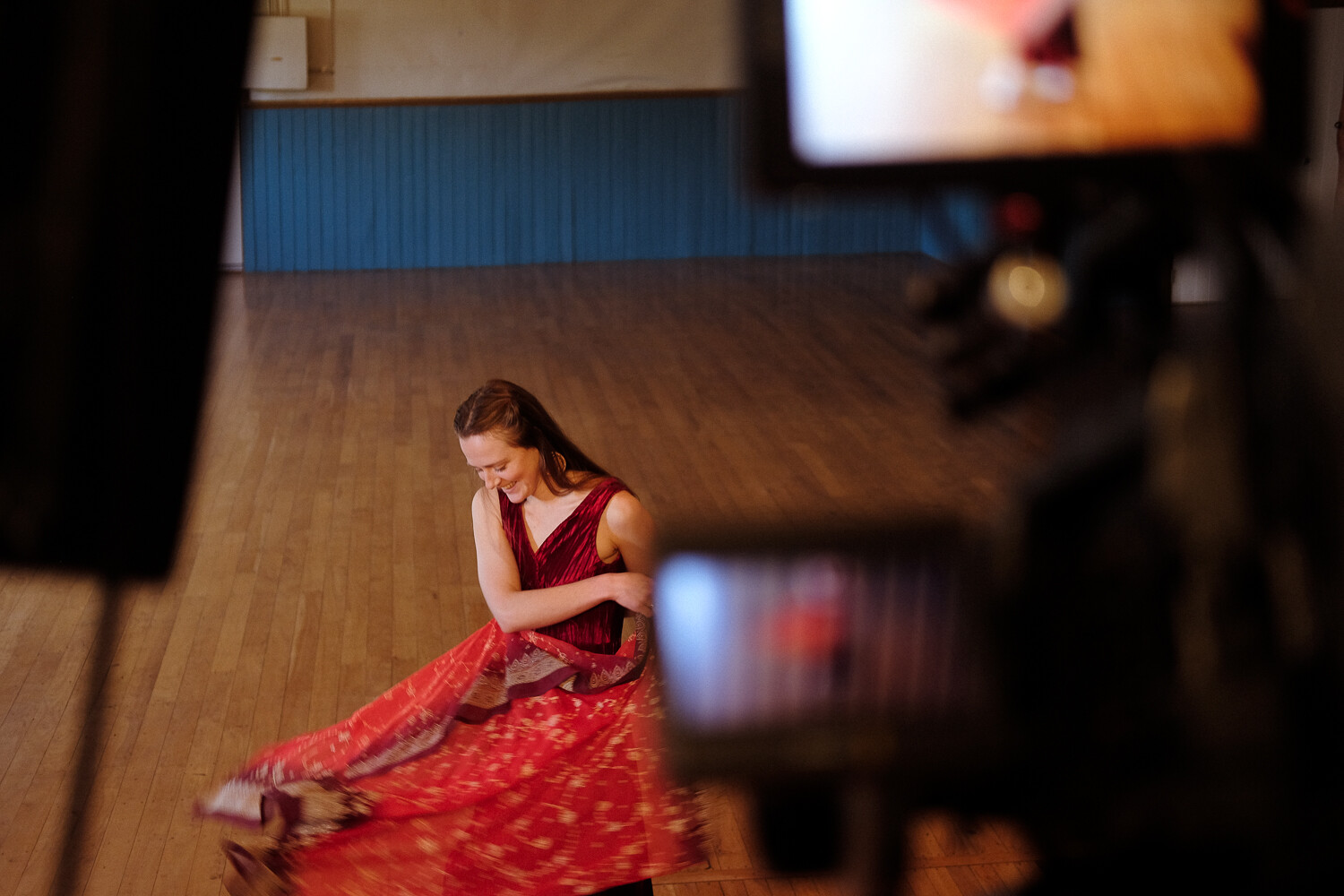 Cast of short film, The Dance of Samsara, behind the scenes. Photo by by Sita Bennett.

At 15 Sita was offered a role in the feature film Drift, filmed in the South West. The opportunity was exhilarating and, when she left school, she found herself an agent and moved to Sydney where she spent her days auditioning for roles and attending acting classes. But it never really fit. Ultimately, she knew she wanted to create her own work.

“I was over there alone and, having grown up in nature, I found it all very overwhelming. I felt worn down by living in the city and taking so much rejection on.”

While in Sydney, she had a story idea she couldn’t shake. Although the writing started as an outlet for her creativity when there was no acting work to pursue, the story flowed quickly. But she struggled to find clarity and instead missed home. So, she packed up and moved back to the South West. 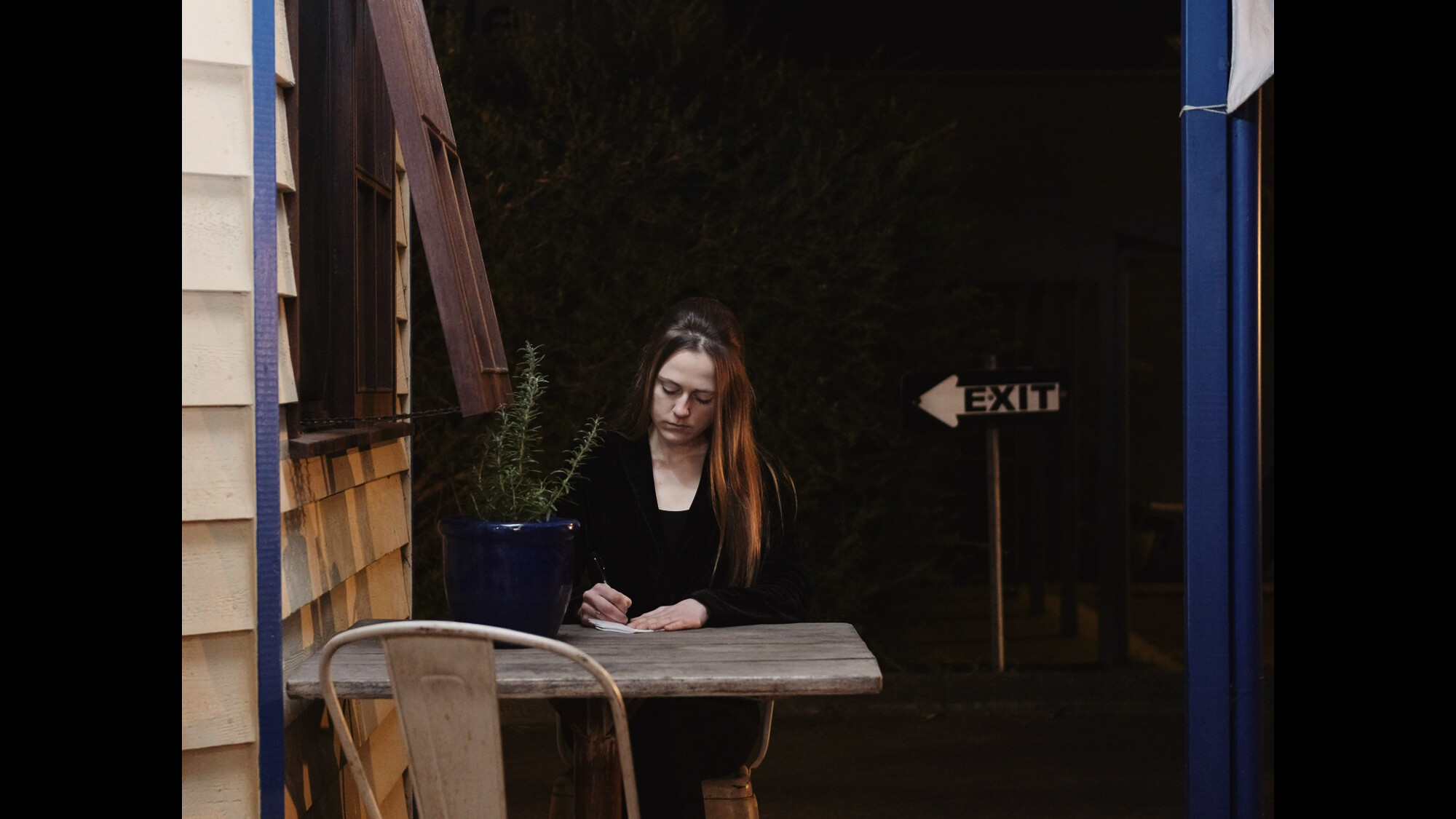 Sita Bennett in a still shot from short film, The Dance of Samsara. Photo by Frank Bennett.

Now, she wakes to the simplicity of nature, swims in the ocean every morning and enjoys the dual quietness and aliveness of the world around her.

“I find that so important in creating for me – to have a clear mind, and the better I feel inside, the more creative I feel. The more freely it flows. Living here plays a big part in that.”

A woman of many talents, Sita co-creates surreal, labyrinth style movies with her brother Frank. The films are based on the South West coast, with characters who are raw, rich, and powerful – like the coast itself. 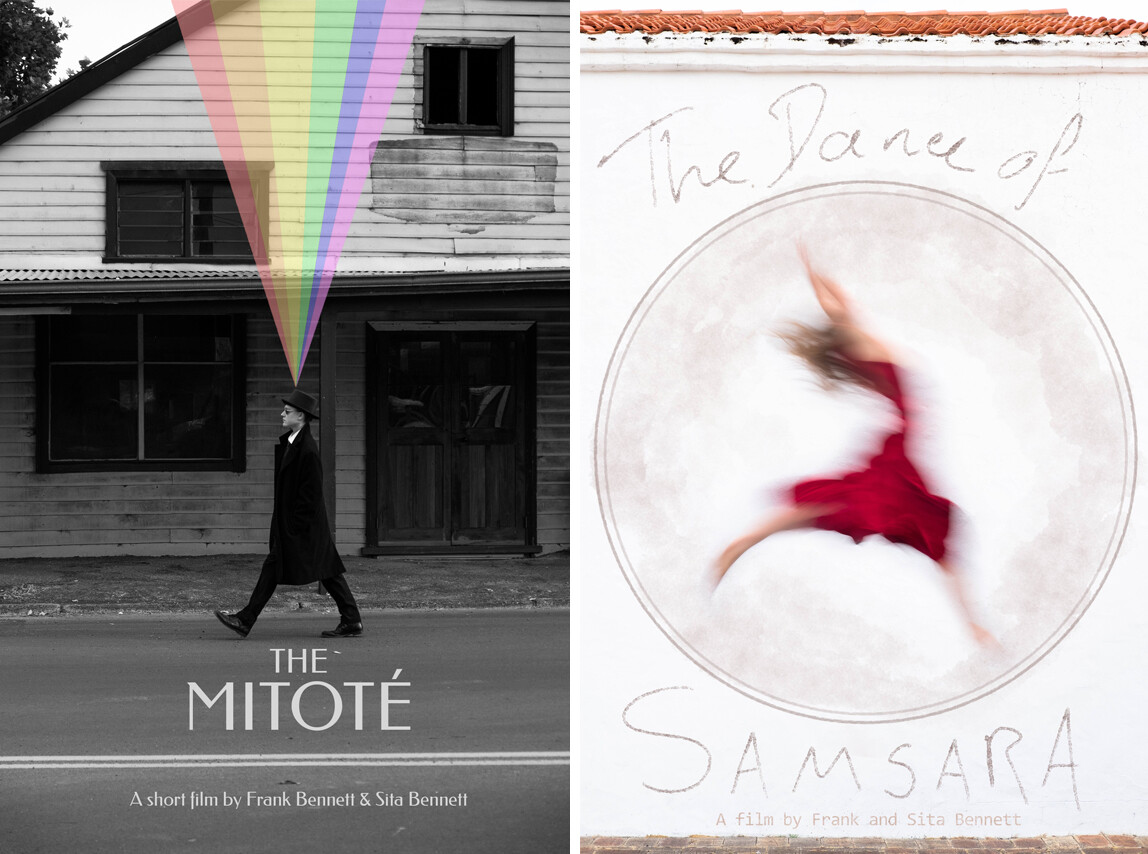 Posters for short films, The Mitoté and The Dance of Samsara. Created by Frank Bennett, supplied by Sita Bennett.

She explores her spirituality by studying eastern traditions and yoga philosophies; and teaches yoga and meditation to likeminded people. She also mentors young women as they transition into adulthood, encouraging them to embrace all that they are and find their inner power.

This all goes hand-in-hand, as she weaves yoga philosophy and mindset into her Young Adult novels and films. For young women struggling to receive guidance, reading allows them to discover and interpret their own meanings. Her characters are on their own spiritual journeys of self-discovery, embracing femininity in a deeply relatable way. 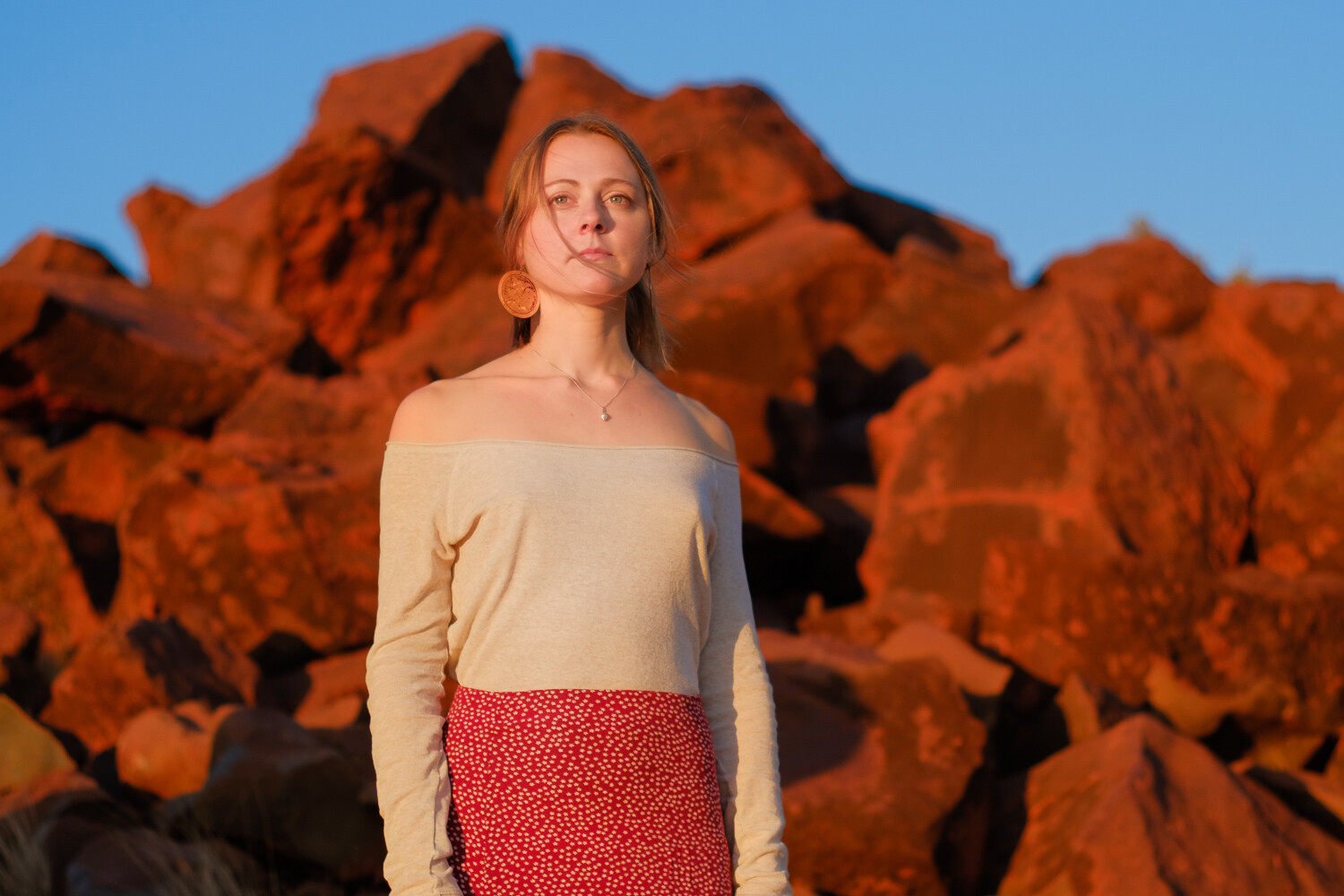 As a child, Sita struggled to find characters in Young Adult Fantasy books that wholly embraced their womanhood. Characters who were not just strong and brave, but also independent, and allowed to be soft and gentle.

“Generally, in society, those qualities are seen as weak. Especially in Young Adult fantasy there are strong warriors, which is awesome, but they’re almost men in female bodies. I feel like I barely come across any books where the feminine aspects of the women, their intuition and loving, caring essence is a real power.” 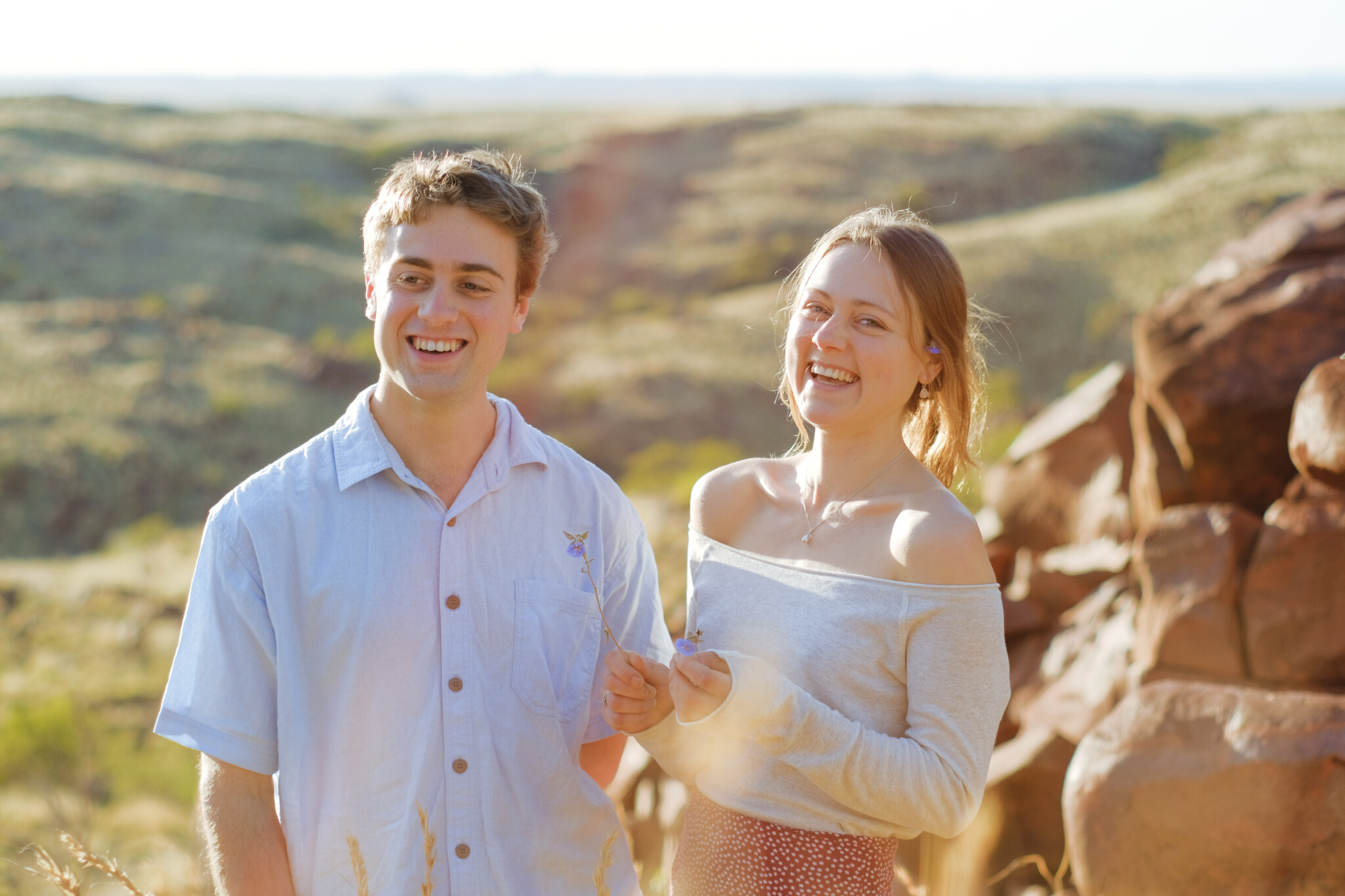 Her first novel, Maya of the In-Between, is a metaphysical fantasy adventure, and was inspired while she was living in Sydney. The novel explores two extreme contrasting worlds: a dystopian world where humans have experienced the inward repercussions of climate change and industrialisation and a utopian world, where humans live in harmony with nature and each other.

Her main character, Maya, lives in the dystopian world where she is shy, quiet, and insecure. Like many young women, she feels as if she does not fit into her world. She embarks on a journey of self-discovery, finding the utopian world she sees through visions and paintings. Maya begins to find and embrace her personal power as life unfolds around her.

Sound familiar? That’s because it has seeds in Sita’s real life and is written for young women like her who struggle to find their own power. 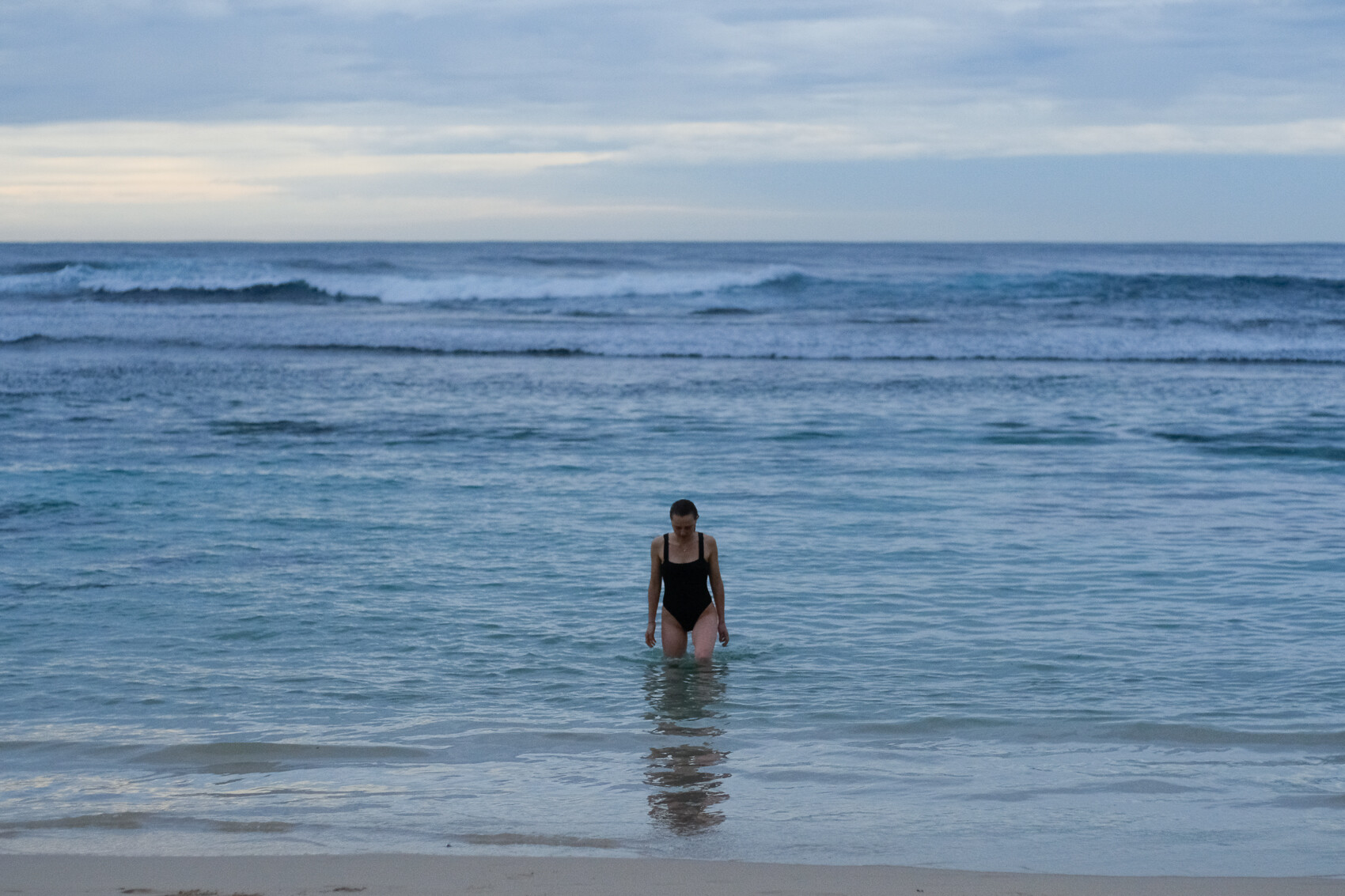 Sita’s morning ritual of a sunrise swim before she starts writing. Photo by Frank Bennett.

Once the book was written, Sita began showing it to other people who encouraged her to continue. But it took her a long time to find the confidence to get it published. Once she had sent it out to publishers, she received a lot of rejection. She was told the genre was too niche for a younger audience, and no one wanted to take the chance.

Instead, Sita decided to learn how to publish independently and researched editing, designing, publishing, and marketing. She applied, and received, a Next Level Regional Grant in 2020 which helped her fund the expensive process of self-publishing. While she made a few mistakes at first, that didn’t stop her from getting the job done and when she looks back, she believes it was an empowering process.

“When I saw the finished copy, it was scary but exciting. It got a lot of good reviews quite quickly, people loved it when they read it! The more good reviews it got, the more it started to sink in that it wasn’t just friends and family being nice – people were genuinely enjoying it. It really took a lot of the self-doubt away.” 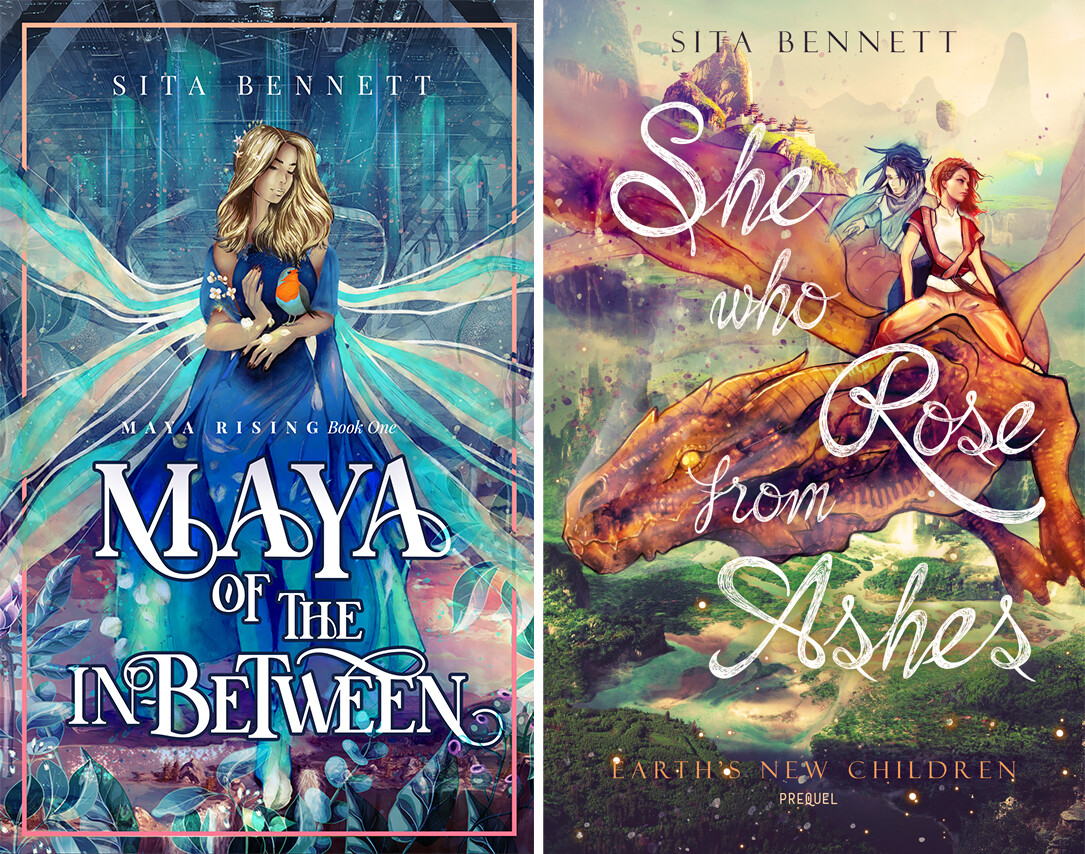 Maya of the In-Between and She Who Rose from Ashes book covers. Created by Dion MBD Designs, supplied by Sita Bennett.

Sita is about to publish her second novel, a prequel to Maya of the In-Between and the sequel is already in the works to complete the trilogy. She has also begun writing on a stand-alone set in York, where she was born.

“This is less fantasy, and more based in real-world Western Australia. I had a lot of fun writing this book because there’s something about the dry and the heat in York that feels very Australian. Margaret river is cool, fresh and crisp.”

Currently, Sita Bennett’s book can be purchased through the links on her website or several local bookstores in Margaret River. A downside to independent publishing, it has been hard to approach bookstores outside of the region to expand distribution.

Time and money are always an issue. But her goal is to get her works into as many bookstores as possible, and soon you may see her work nation-wide.