“If someone had told me when I was turning in my back shed 200 kilometres east of Perth that one day I would be doing a woodturning demo in Tampa, Florida… I would have said, what drugs are you on?”

Growing up on the family farm in the wheatbelt, a young Neil Turner turned to woodturning as a creative outlet from the harsh realities of farm work. Confronted daily by sparse rainfall, soil erosion, wind, and fire – the elements were always in the back of his mind.

Using materials sourced from the farm, Neil began to explore the complexities of these same elements in his creative practice. Now with an established career, he has been granted opportunities to work all over the globe. No matter where he finds himself, he maintains a deep respect for all the natural elements that have shaped his materials.

Neil’s work has been showcased throughout Australian and international galleries, winning him fans worldwide. His incredible sculptures can be found in public galleries and private collections, where he is often requested for commissioned work. Most importantly, he has collected a myriad of incredible stories, and incredible friends, he holds dear to his heart. 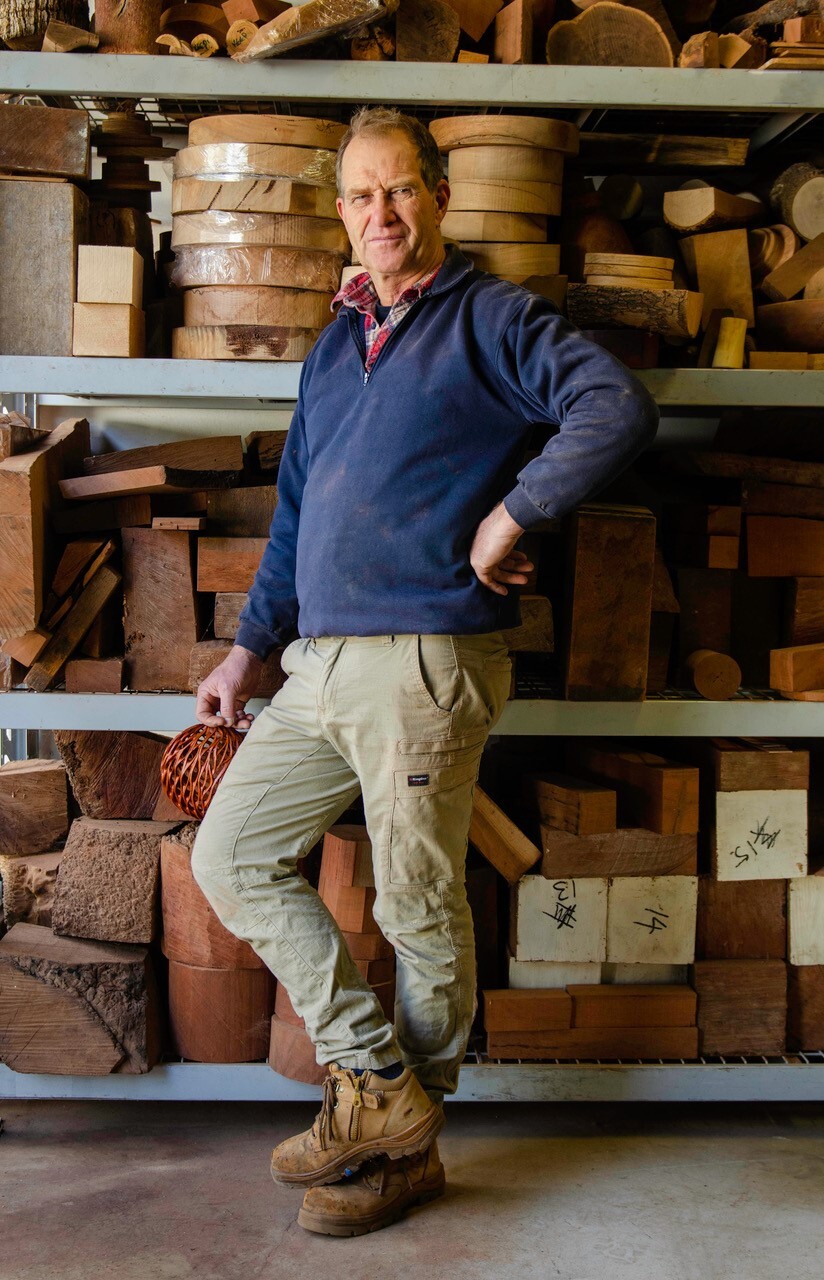 While he may now be a master of his craft, Neil’s first few attempts at woodturning were anything but perfect. Fresh-faced, 19 years old, and without the proper tools, he was asked by a friend to create a lamp.

“I didn’t own a lathe, so I made the first three lathes I had. When I made the lamp, well, it was the most awful lamp you’ve ever seen. It was shocking. I used green timber, it split, form was absolutely zero, and I was using tools I had no understanding of.”

Through trial and error, he eventually succeeded, and with plenty of practice his work began to evolve. 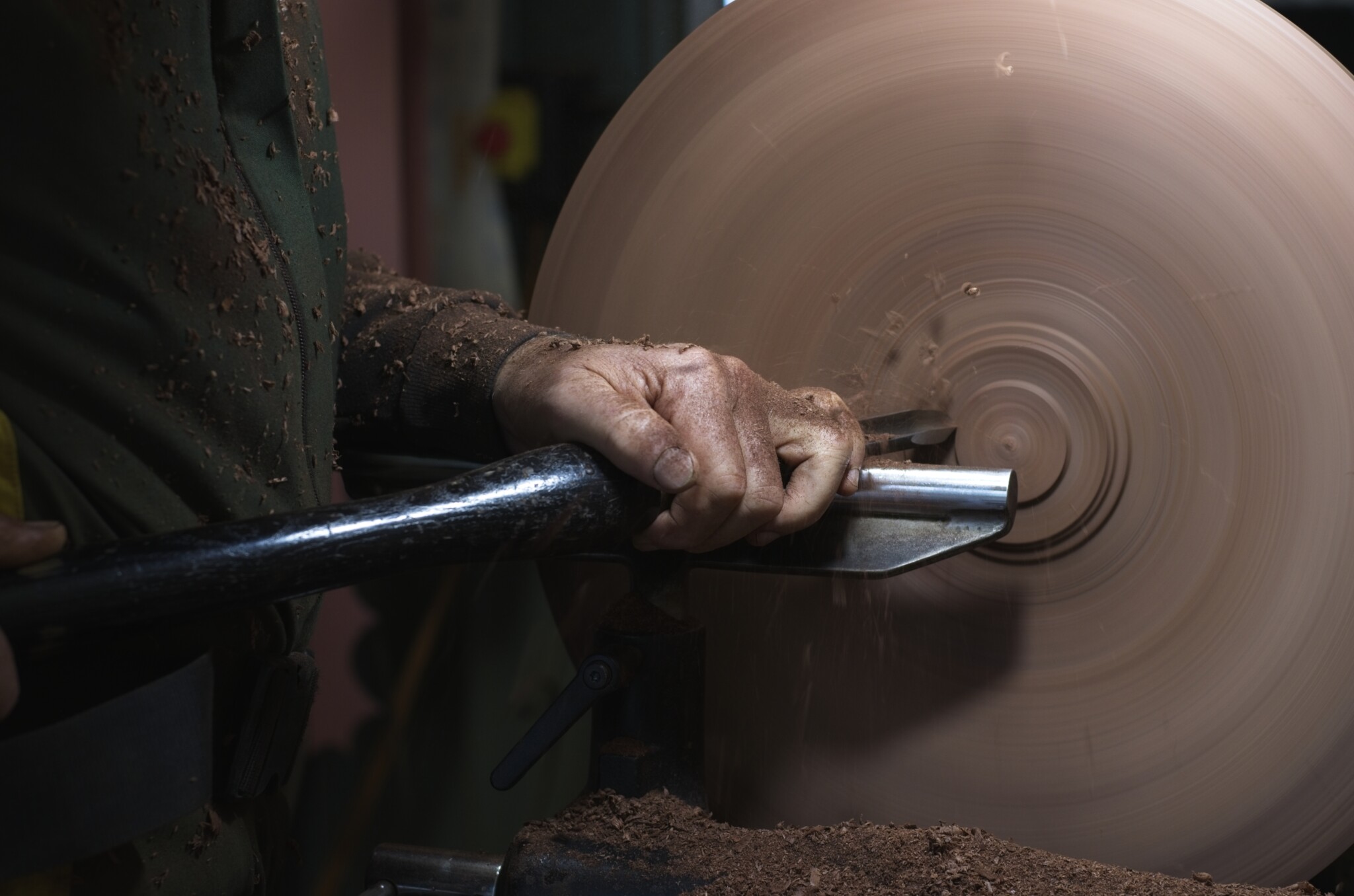 After attending a series of workshops in Bunbury, held by Stephen Hughes and Vic Wood, Neil began to look at woodturning in a whole new way.

“Stephen Hughes was the first guy in the world to do piercing on wood turned objects. I remember, I went home, and I was just zinging. I thought wow, wood turning is more than just making bowls and rolling pins. This guy is creating art. Really, really, fantastic art. I couldn’t get enough; it was like someone had just flipped a switch.”

Slowly, his practice shifted from purely functional pieces to incorporating more artistic designs. Taking inspiration from the elements, Neil found himself particularly drawn to fire. Captivated by the fluid, forever changing nature of the flame, he began creating fire form sculptures, challenging himself to capture something that was never stationery. 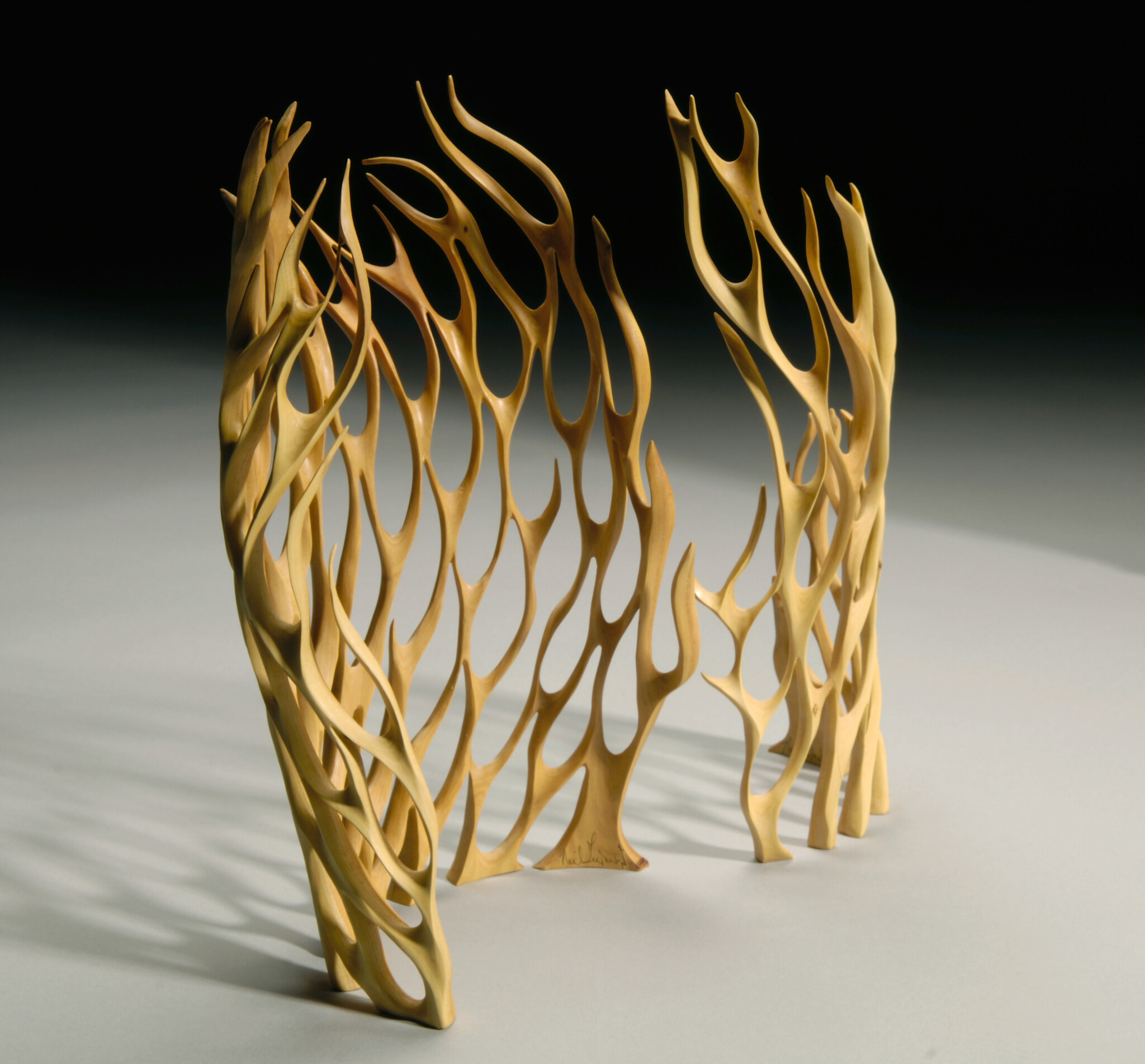 After fifty years of working on the family farm Neil, and his wife Suellen, decided it was time for as sea change.

Although Neil had enjoyed farming and appreciated the amazing life skills it had given him, the pair were ready to try something different. They wanted to lean into their artistic practice in an environment they could really thrive.

The hardest part, Neil says, was having to tell his dad they would be leaving their friends and family behind for a new adventure – with no guarantee of success.

“It’s been an interesting journey. It was a big step to leave the farm and do this full time. I had to really give that due consideration because, obviously, we were leaving a lifestyle that was not really exciting anymore, but we had an income if it rains, you know. Whereas here, we really didn’t know what exactly was going to happen.” 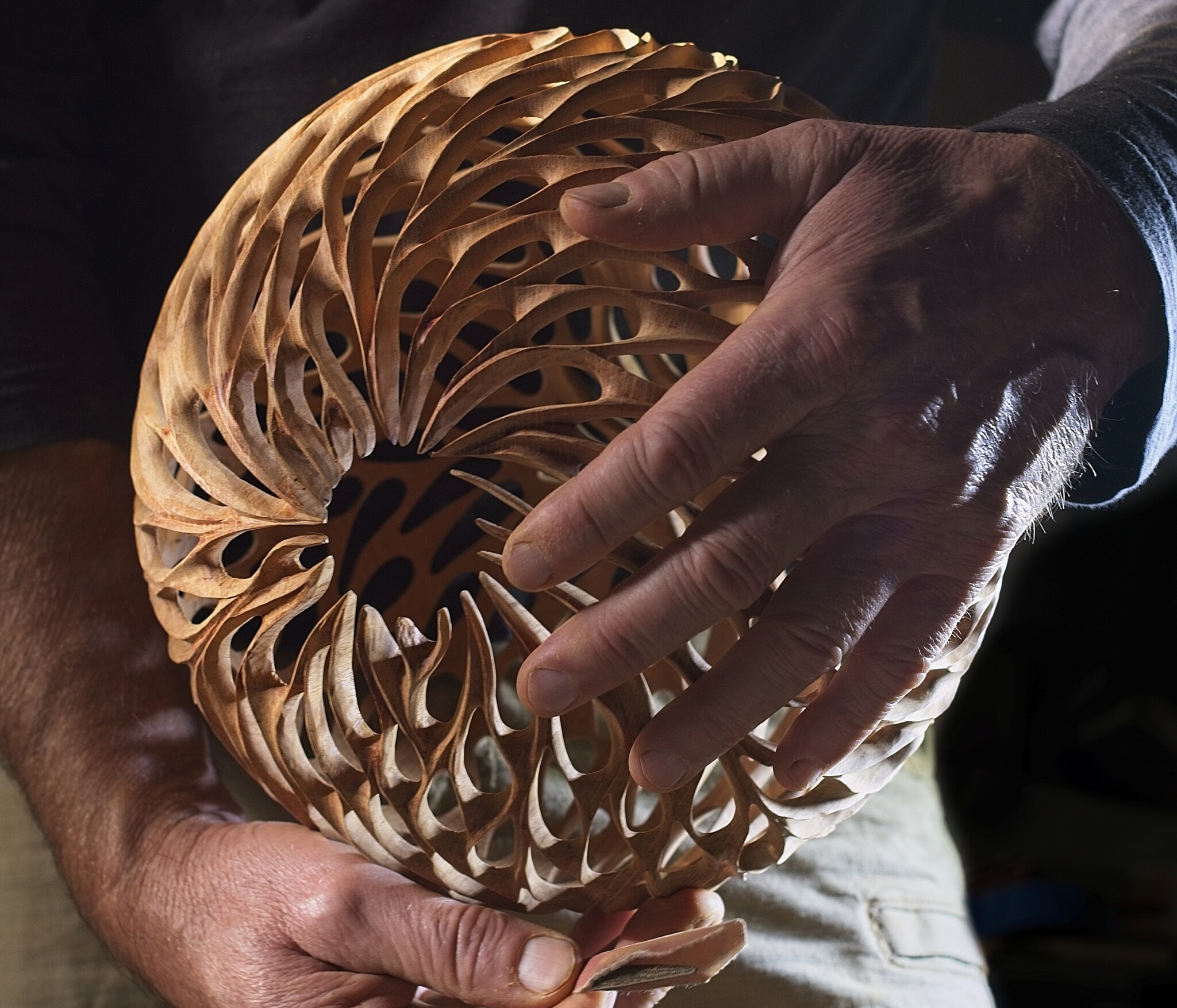 The couple had two desires when they began looking for their new home. Neil wanted trees, Suellen wanted ocean. Looking for a block of land north of Perth that had both proved difficult, so the pair set their sights to the South West.

Suellen rang a real estate agent who suggested Stratham, about 200km south of Perth. Coincidentally, after playing a round of golf, Neil met with a gentleman who often played at the Capel golf course near Stratham. He remembered seeing a 10-acre block for sale the pair might be interested in. They drove down to check out the property, fell in love and put in an offer.

“We have a nice, different, sort of house here… and the bush looks after itself! We’ve got the kangaroos to do the mowing for me and all that stuff, so I don’t have to worry about tending it. I spent all my life tending the land, that’s one thing I just didn’t want to do anymore.”

While the farm had provided inspiration in the way of wind, water, and fire, the South West came with its own set of stimuli. While walking on the beach, Neil found himself drawn to the corals and sponges strewn across the shoreline. Their natural perforations became a new source of embellishment in Neil’s work. 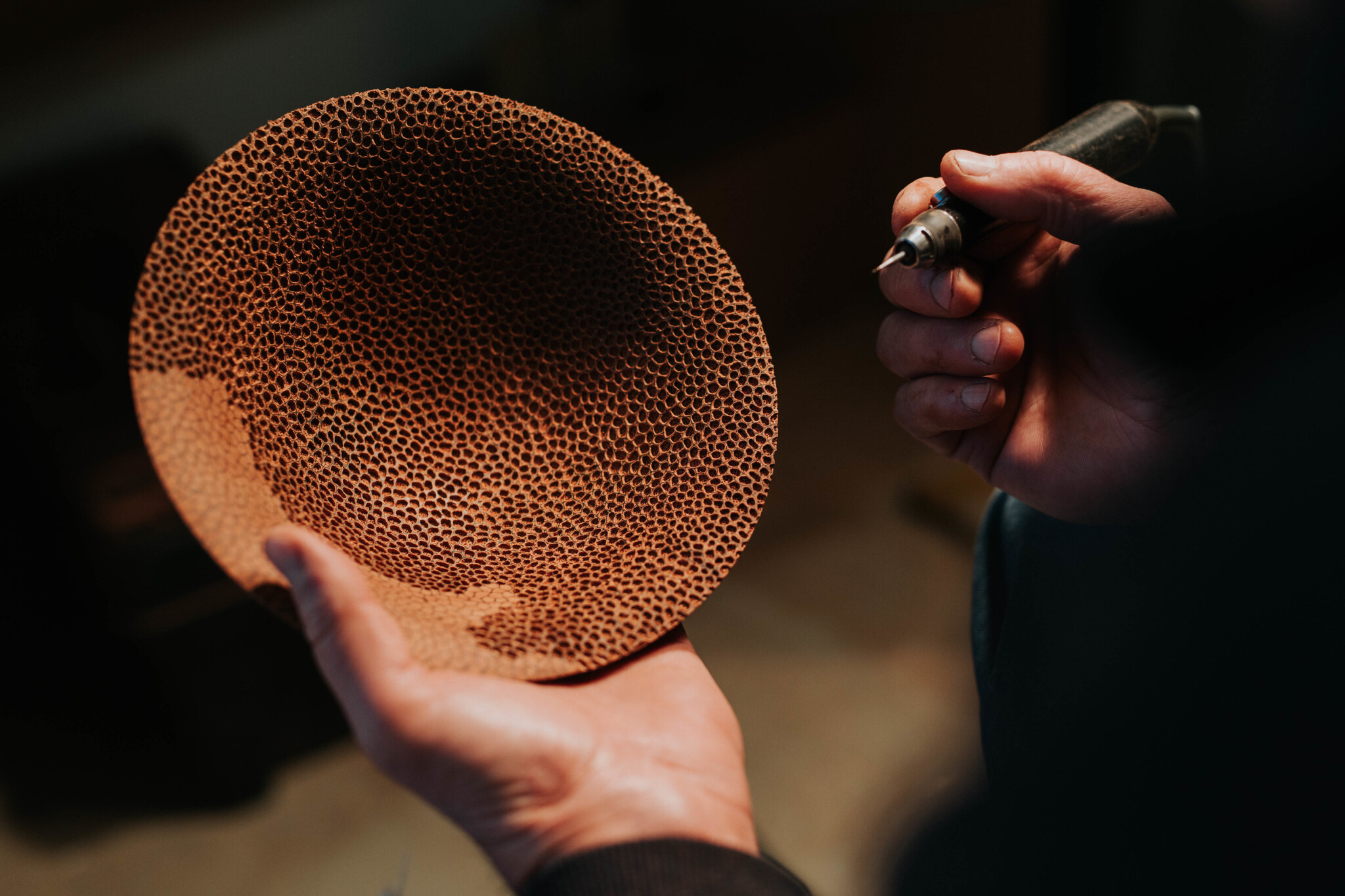 Neil quickly realised he wouldn’t make a living just turning bowls. Looking to add more strings to his bow, he enrolled in a fine furniture making course in Dwellingup. Under the tutelage of some amazing instructors, he began making furniture and even applying for public art commissions.

One particularly memorable public art commission saw a 300-millimeter-high maquette transformed into a three-meter-high fire form sculpture with the help of a 3D scanner. With over three million triangular facets, it took over 54 hours for the structural engineers program to complete the process – even crashing the system at one point. Neil says the engineer had told him, “The maths for this piece of work is actually more complicated than the Sydney Opera House”.

Moving it from where it was made to its final location at the Koolinup Emergency Services Centre was no small task.

“I thought we’d be able to transport this from where it was being made, to the place we were having some coating put on. It would be laid down. (The manufacturer) said ‘No, you’ve got to stand it up’. So, we’ve got this three-meter-high box on the back of the trailer going through Perth in peak hour traffic, wondering if we’re going to pull the powerlines down while we’re driving along… it was a very stressful drive.” 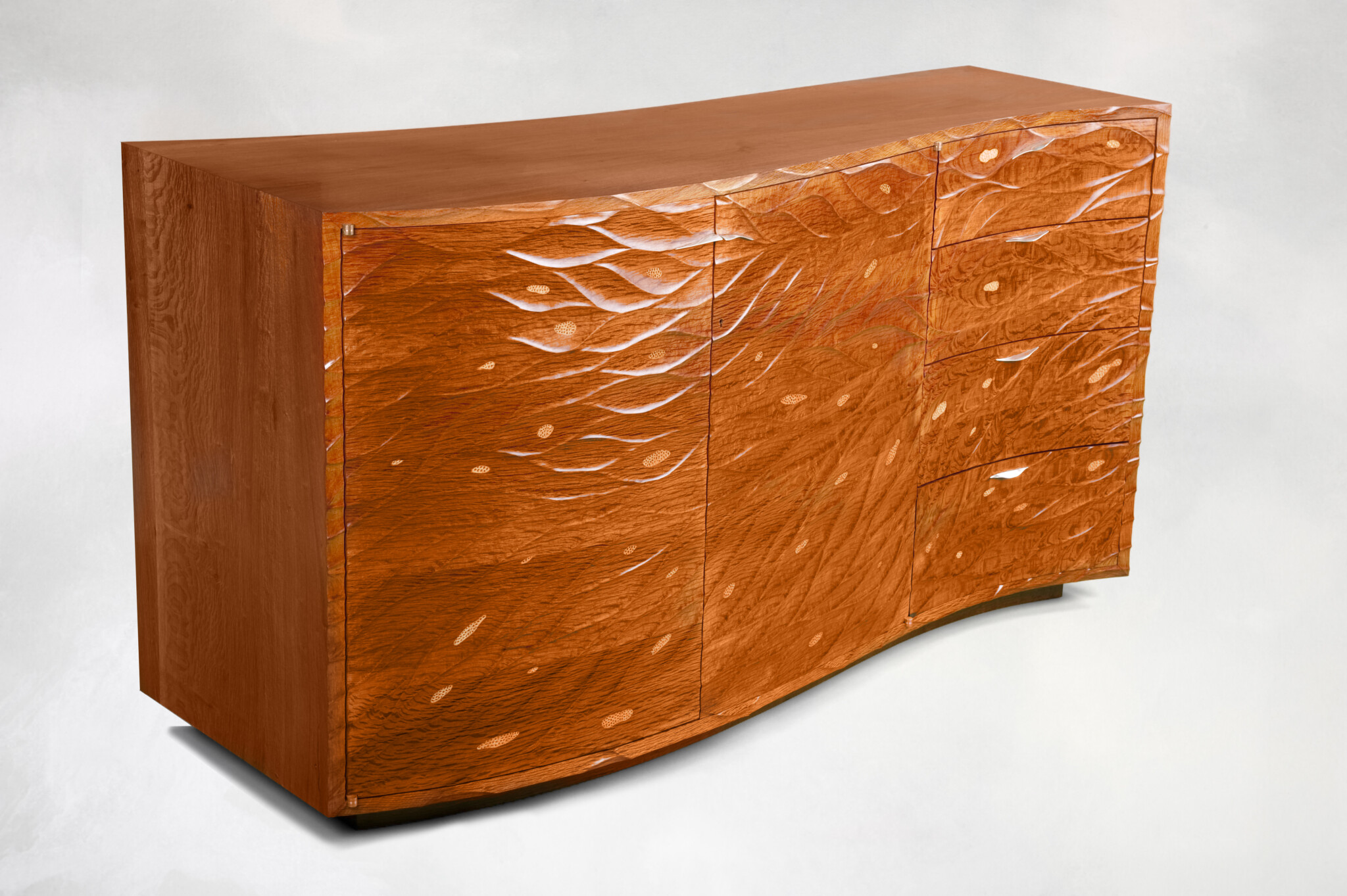 Having worked in places like New Zealand, Ireland, France, Canada and the USA, it’s an incredible experience to hear Neil tell stories from his travels.

In 2013, Neil was one of nine international artists invited to collaborate on a project in Ireland. A group of about 20 artists in total worked together to create an Irish Stone Wall made entirely out of wood. Each artist brought unique talent and personality to the project – even going so far as to create wood beetles, spiders, and spiderwebs to sit amongst the ‘stones’.

“The one thing I remembered about the walls, was that they’re all laid by the human hand. We arrived there a week early and had a drive around just to look at the construction, see how they were made, because they are made differently in some areas. Someone had carved this rock round and I had a good friend of mine hang on to it. I drew around his fingertips as he held the stone, then relief carved his fingertips on the stone, so you could see where the fingertips had been.

Unfortunately, Sue and I were flying out Friday morning and this was being delivered Friday evening. So, we missed the final part of the wall being assembled and put in situ. Later, I saw another good friend of mine who was there at the time, and he had stayed until the end. He said to me, “Oh, you carved the stone with the fingertips.” I said that’s right and gave him a smile. He said, “We were looking for one last stone to put in the wall. And we saw that stone and realised what you were trying to say.” So, they put that as the last stone in the wall….

I was really, really chuffed that they understood what I was trying to say. All the rocks, and essentially this wall, were no different to everything else. They were all laid by the human hand.” 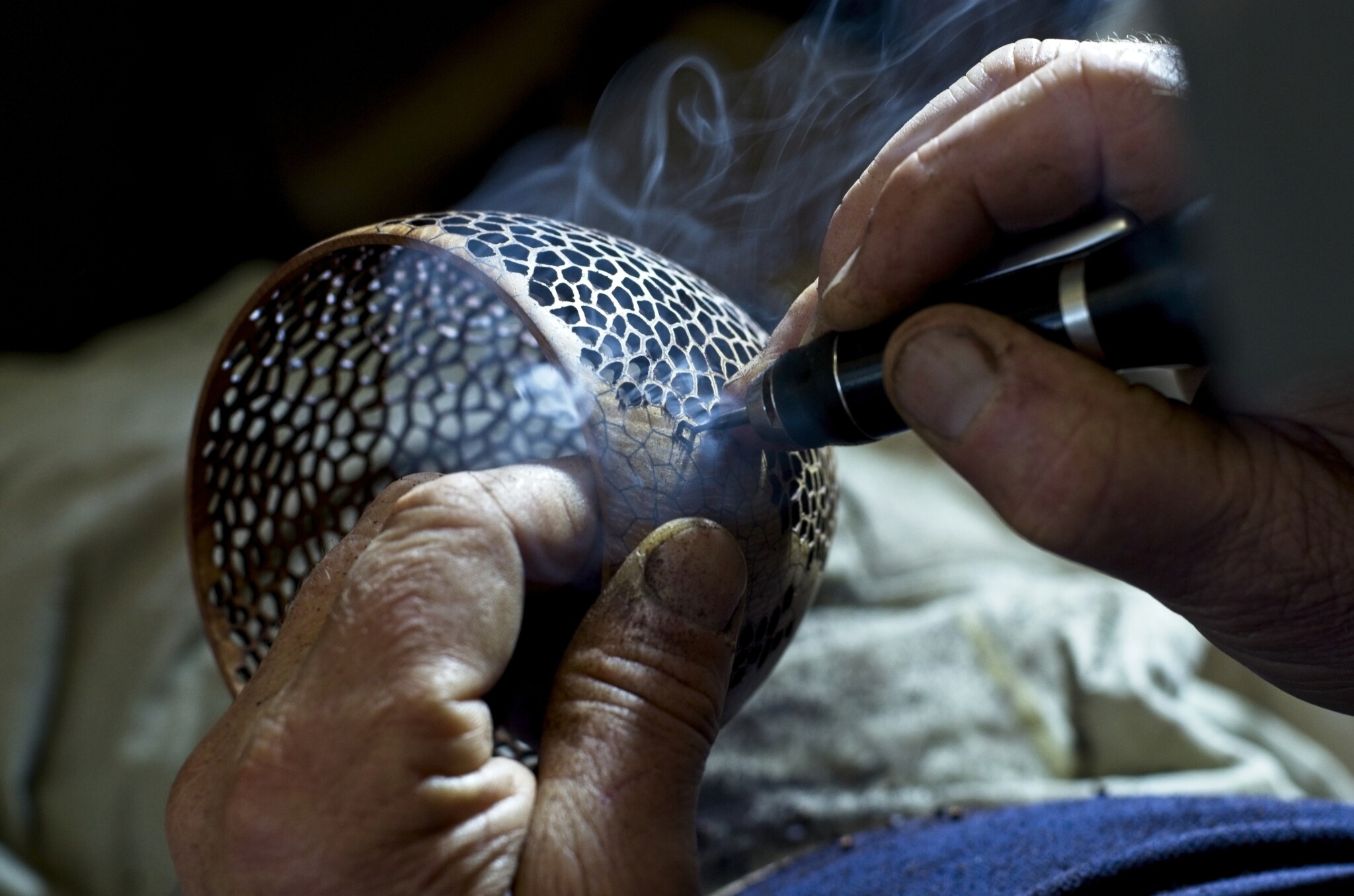 Neil and Suellen had to leave Ireland early because Neil was flying on to the USA to participate in the International Turning Exchange in Philadelphia. Over nine weeks, he was able to immerse himself in turning, carving, networking, and art inspiration.

Shortly before he arrived, he received a notification from the Carnegie Museum of Art. Someone had donated one of his pieces to the museum, and they wanted to know more information about it.

“I sent them the information and I felt very sad that the people who owned it had obviously tired of it. They were just getting rid of it.”

During his exchange in Philadelphia, he was given the chance to demonstrate at the American Woodturners Symposium in Tampa, Florida. Sitting down for lunch with his wife one day, Neil was surprised when another couple chose to sit right next to them in an otherwise empty auditorium. Soon after, a friend of his entered. Coincidentally, he also knew the couple sitting next them.

“Just work out what had to line up right for this to happen… This guy has walked in and said, ‘This is Neil and Suellen Turner’ and this lady says ‘Oh! Neil Turner. We had a piece of your work that’s now in the Carnegie.’

So, now I know who ditched it.

Anyway, she said, ‘There’s a bit of a story to that. The actual curator of the museum came and saw us and said, “Look, don’t you think it’s time some of your collection was donated for posterity?” I said yes, you can have 25 pieces, but they had to be on permanent display”. It turns out, mine was one of the first selected of those 25. I was really, really chuffed.

Two years later we went to Pittsburgh, I was demonstrating there, and we went and saw it in the gallery. It was a real buzz. I always thought that moment happened to dispel the thought that it wasn’t good enough. It was actually very, very good.”

Neil understands art is objective; If he likes what he creates, other people’s opinions don’t matter. That doesn’t stop him from being quite critical of his own work, and always looking for ways he can improve.

As we enter a new year, Neil is looking forward to travelling again soon. He’s already been asked back to France for a ten-year reunion and he’s excited to catch up with some of his international friends for the first time in years.

“I certainly won’t be idle… I have a few things on the back burner. So, I think I’ll be busy for as long as I want, unfortunately.”

Unfortunately? Well, this just means you won’t see Neil taking a swing on the golf course any time soon. Instead, he’ll be puttering around in his workshop.