Michael Jalaru Torres understands there’s no perfect straight line to follow when chasing your dreams. The journey is more of a zig zag, and that’s perfectly okay. 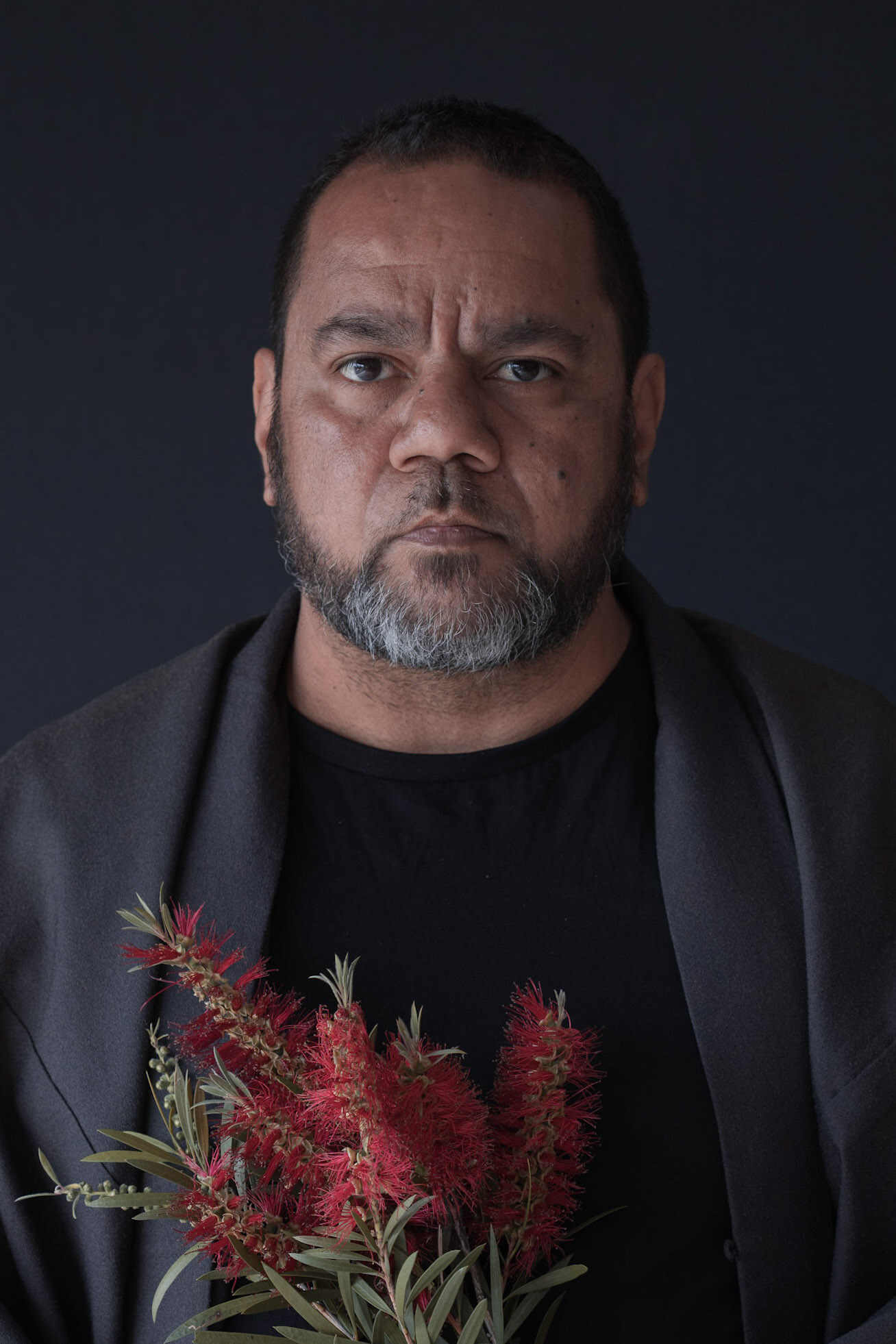 A graphic designer by trade, Michael spent 18 years working in radio and television before purchasing his first digital camera and trying his hand at photography. But it wasn’t easy to figure out what he wanted to shoot, and the camera sat in its box for six months unused.

“I was tired of film and television. You’re always just a cog in the machine in that type of industry, and I wanted to start creating and sharing my own stories, or at least through my own lens.”

Even after picking up the camera, it took Michael two or three years to work out what type of photographer he was. He explored every genre imaginable, reverse-engineering the images he liked, and learned by trial and error.

His work now draws on his own stories and personal history, exploring contemporary social and political issues facing Indigenous people. He tells his stories through abstract landscapes and intimate portraiture photographed on Country. Pulling from his experience in graphic design, he often incorporates etching and drawing into his extraordinary pieces. 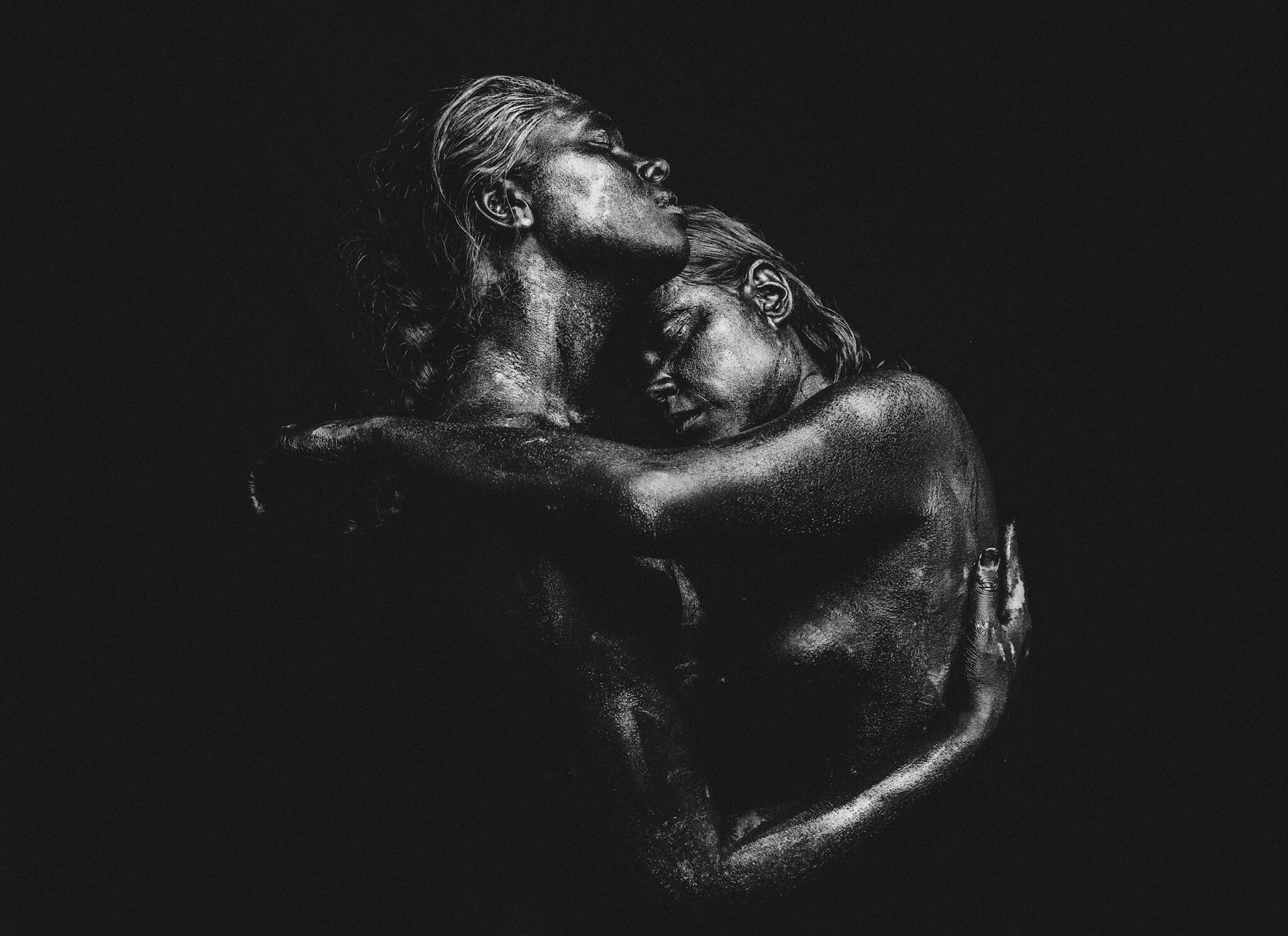 Jija. Native exhibition. “The strength in the embrace of a sister heals trauma.” Photo by Michael Jalaru Torres.

Living in Broome as a single father, Michael found his inspiration online. There weren’t many galleries they could get to easily, and not a lot of other photographers doing similar work to connect with. Looking after his young daughter meant his passions had to come second.

In 2000, Michael’s life was rocked by a diagnosis of aggressive non-Hodgkin lymphoma. He was told he should consider palliative care rather than treatment. Instead, he pushed for treatment and ultimately became a cancer survivor.

Watching people in similar situations lose their battles took its toll. In the aftermath of his diagnosis, Michael found himself dealing with depression and survivor’s guilt. His rock during this time was his daughter, and he promised her he would one day tell their story.

When his daughter went away to boarding school in 2014, Michael found himself with more time to explore, hone his craft, and network with others in the industry. He made himself some business cards and booked plane tickets for Perth, Melbourne, and Sydney. He went into every gallery he could find that exhibited photography works to introduce himself. 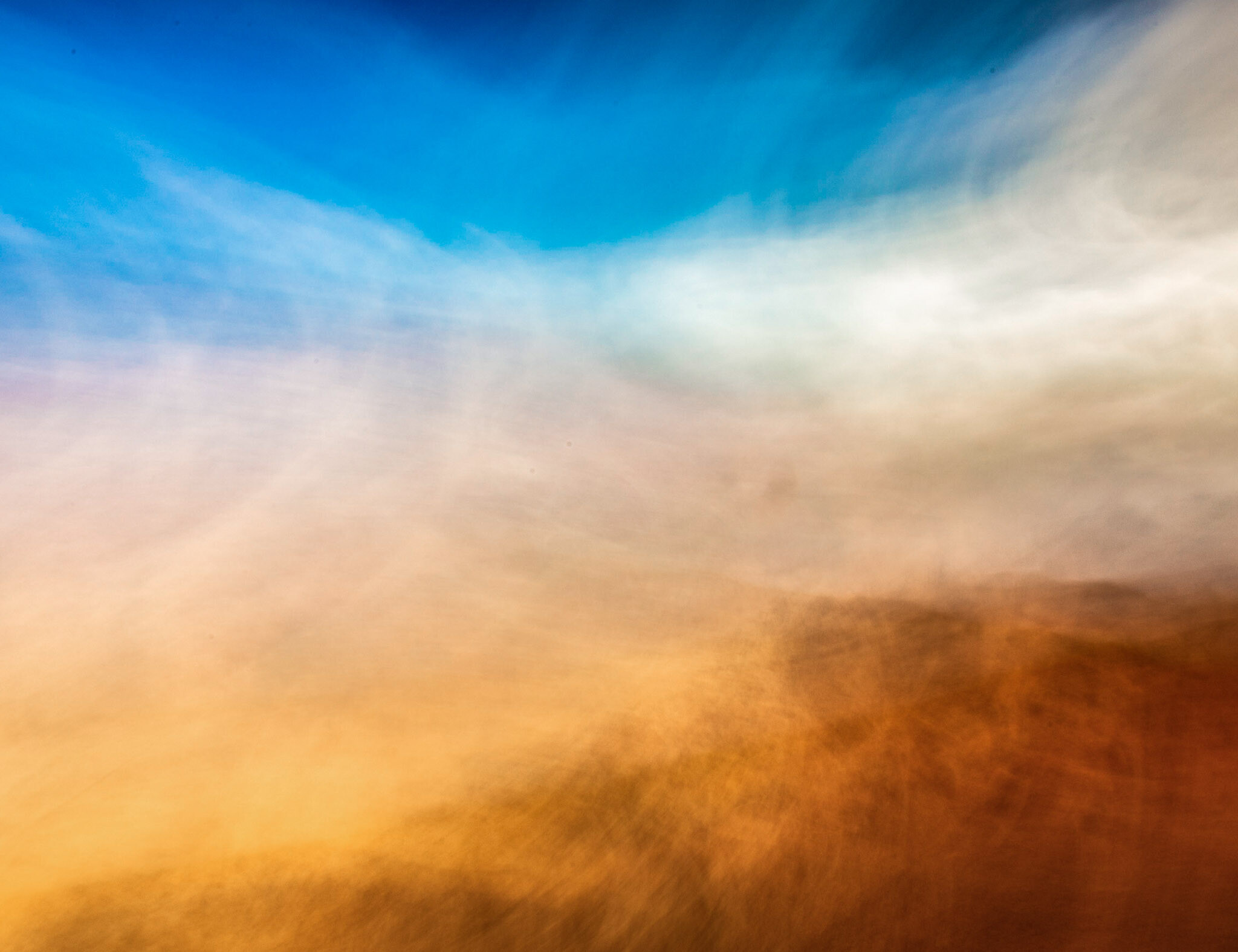 In Sydney he found a small gallery called Contact Sheet. They were impressed that he had travelled all way from the Kimberley to see their gallery space and offered him a wall in a group show. Michael knew he needed to mingle with people and came up with a way to get people talking to him.

“I brought a little pindan, red dirt from here, over in a shoe box. I put it in a little circle in front of my work. It was that really abstract landscape stuff, filled with reds and blues. I explained to them, ‘This is the sand. This is the colour of the land where I come from.”

His idea worked and the pindan became the most popular attraction in the exhibition – even more so than the artworks themselves! Everyone wanted to have a little red dirt of their own to take home. 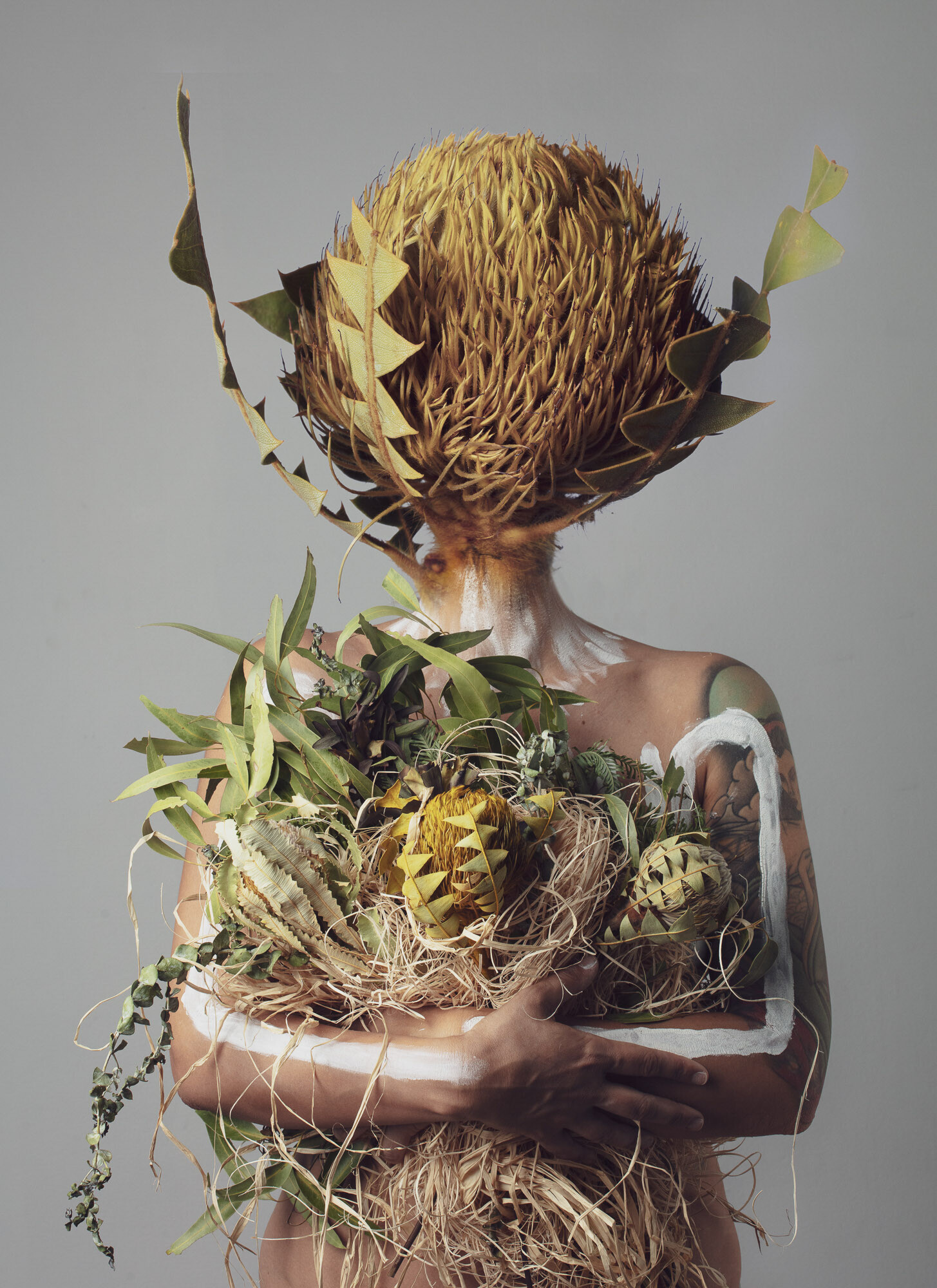 Michael’s dedication to learning, and networking has proven time and time again to be an asset. Group shows at the Fremantle Art Centres’ Revealed Exhibition, and the Art Gallery of WA’s Desert River Sea allowed him to connect with curators and improve his work from their feedback. He strengthened his technical and storytelling skills, being invited to bigger and bigger group shows until he was finally offered a solo exhibition.

His first solo exhibition Scar looked at the traditional practice of carving or scarring surfaces. He painted the chests of his subjects, photographed them in intimate portraits, then scratched the surfaces of the photos. Each image detailed social issues in his community, such as suicide and oppression.

He sold this work in a series of one-off prints, deleting the digital copies after the exhibition. The only people who can see this work are those that purchased the prints. People called him nuts for deleting the files, but Michael sees it more as giving power back to print photography.

“Nowadays everything is mass-produced digital imagery. I said no, I’m going to go back to where it becomes like a painting, where it’s a one off. And if it gets destroyed or lost then, well, it’s lost.” 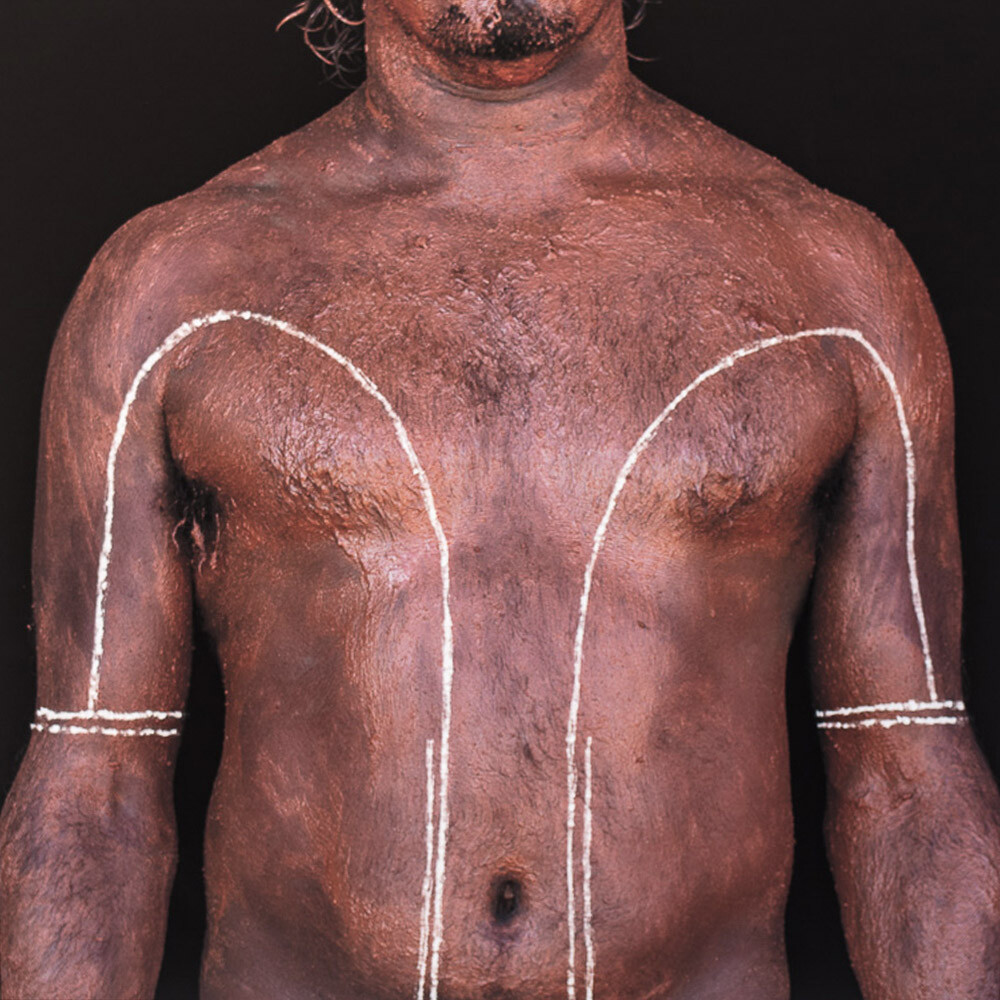 In 2018 Michael moved to Melbourne. Now married with a second child, they decided it was time to visit his wife’s hometown and see her family. While there, he decided to pivot towards commercial photography.

Despite the move giving him more freedom to create, Michael found it difficult to crack into the Melbourne scene and struggled to connect with the landscape of his new home. Melbourne’s mushy greens and browns were a far cry from the vibrant reds and blues he was used to.

“For me, growing up in Broome was flat. The big clouds that come across, the storms. I find that more beautiful than any big waterfall or forest. (In Melbourne) you go to an area which is cleared, which is destroyed, just to see the beauty of the hills. I found that really distressing because I couldn’t really connect. What people saw as beauty was actually destroyed landscape.”

As a Djugan and Yawuru man with tribal connections to Jabirr Jabbir and Gooniyandi people from Northern Broome and the Fitzroy Valley, the people in Melbourne just looked different from home. He couldn’t physically shoot any of his ideas. 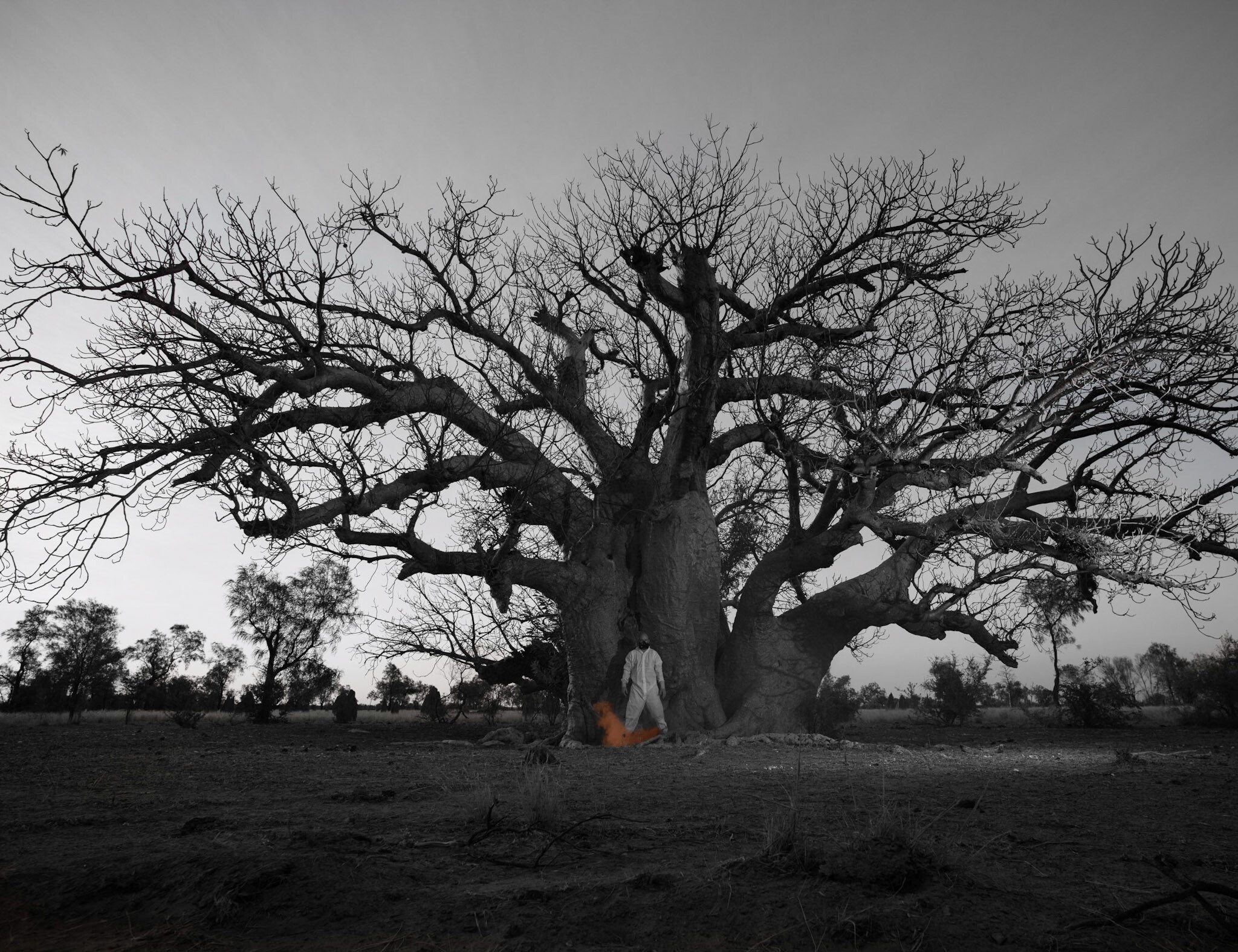 Returning to Broome to reconnect with his personal history and share the stories of his Auntie’s and elders, Michael was also able to finally deliver on his promise to his daughter by telling their story.

Tether opens up about surviving cancer and depression while raising his daughter. Visually, the work creates a connection between the sun, moon, earth, and stars to portray the bond between father and daughter.

Michael says Tether is his strongest personal work, taking a deep look at his own personal legacy. Much of his work showcases forgotten black history in WA and Australia. History such as blackbirding, Agent Orange, and the spraying of the Fitzroy River.

His work is not designed to teach people about the history, but rather to empower people to seek out that knowledge for themselves.

“The best way to teach someone is to allow them to find their own knowledge in it. Otherwise, it goes in one ear and out the other. If they find their own way of finding that story, then I think they learn better and have a better connection with it.” 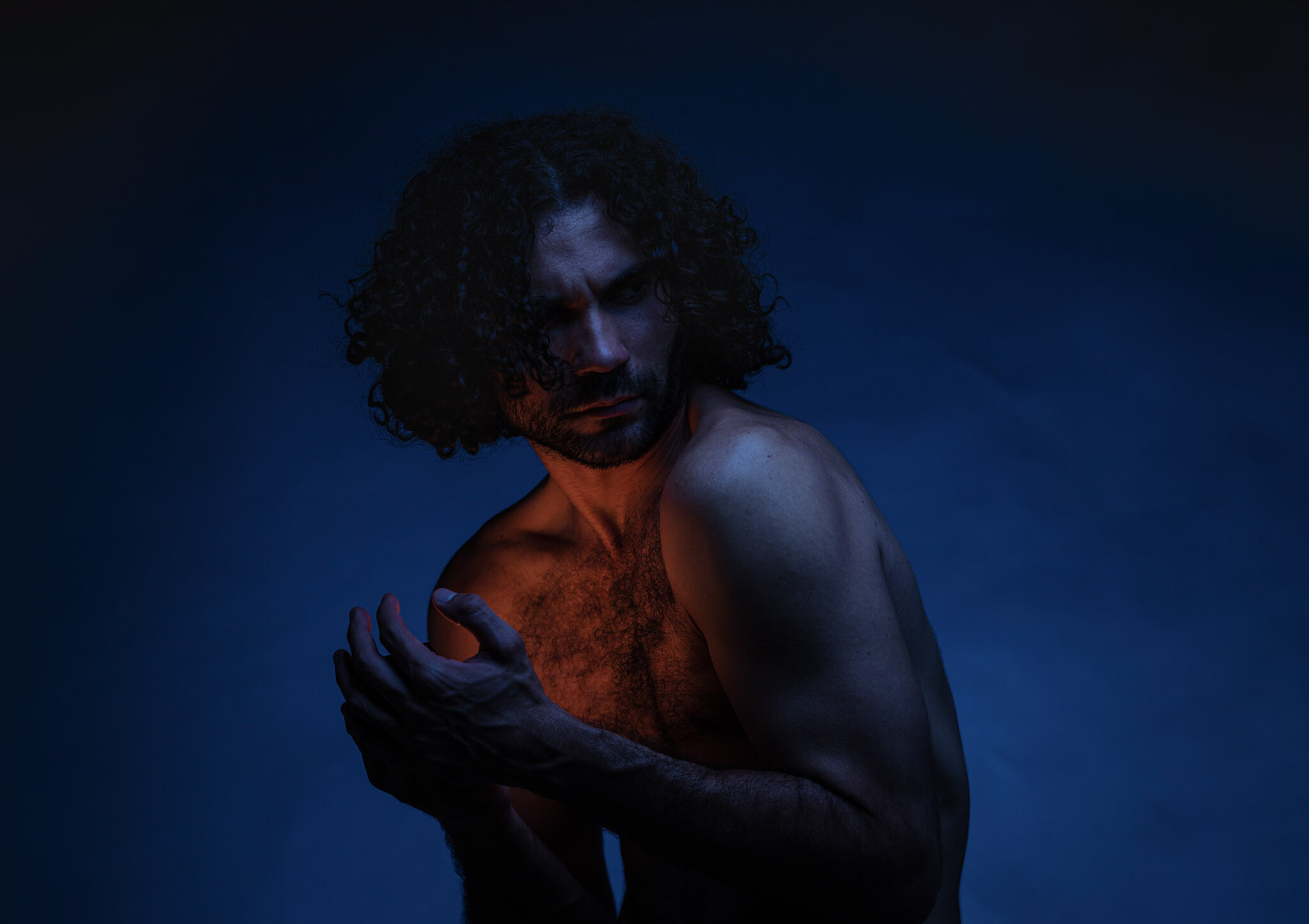 Blood of my Blood. Tether exhibition. “Blood of my blood binds us; her glowing warmth illuminates the void as I give sanctuary to her evolving soul.” Photo by Michael Jalaru Torres.

After struggling to find his own place in the industry, Michael wants to make it easier for others to get their start by creating pathways for emerging Indigenous photographers to follow.

While living in Melbourne, he began a partnership with the AFL to create pathways for emerging photographers.

“You get a lot of players who don’t make it but have beautiful knowledge of the game. So hey, how about you pick up a camera, shoot the game, shoot behind-the-scenes, learn all that and we can create an industry in all the little pockets around Australia for the love of the game.

He also created the First Sight project in partnership with the Head On Foundation, mentoring emerging First Nation photographers on how to exhibit fine art photography. This project meant teaching others how to get their files ready and correct for printing, how to select images, how to write names and descriptions, and what goes into putting on an exhibition with a showcase at the Head On Photo festival in Sydney.

Michael used the Head On project as a resource for connecting with other Indigenous photographers. From there, he formed a group of likeminded people in a new community-led initiative they call Blak Lens. 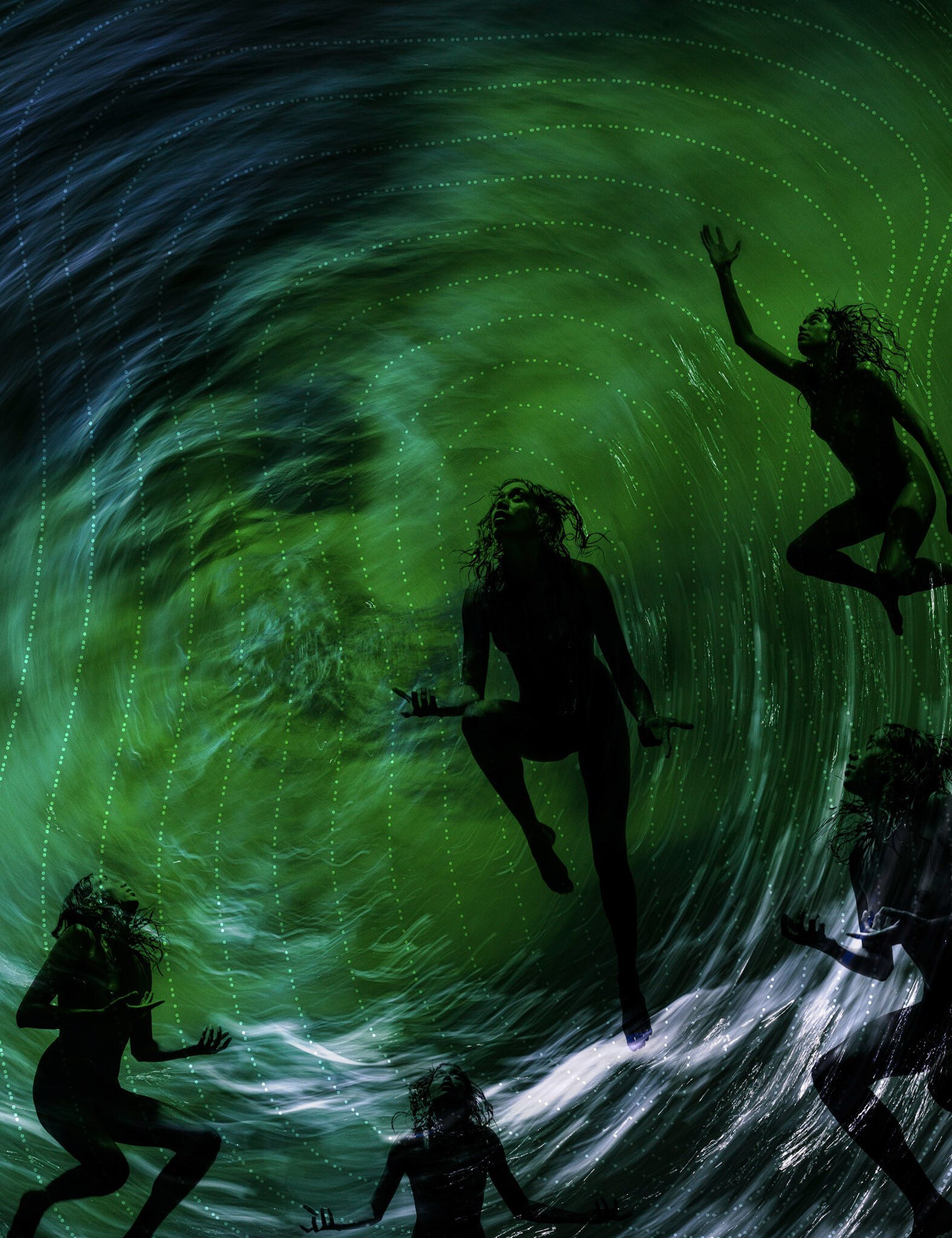 Launching on January 26 Blak Lens has ambitions to become the peak body for Indigenous photo media, encompassing all forms of photography and videography. Michael hopes the initiative can work towards changing the perspective of black photography in Australia and push the industry to better embrace Indigenous photographers.

“We have created a community now, and we’re all ready to move forward. One of the mantras of this whole thing is, I don’t care what they do as long as they find someone who’s emerging and help them out. We have to build up these leaders, and they’ll become ambassadors and keep growing.”

Michael explains, he sees a lot of young Indigenous folk getting into photography, but they never know what to do. They get lost and don’t let themselves mature as storytellers. He wants to let them know they don’t need to get it right the first time. It’s not a straight line to the end, it’s more of a zig zag. 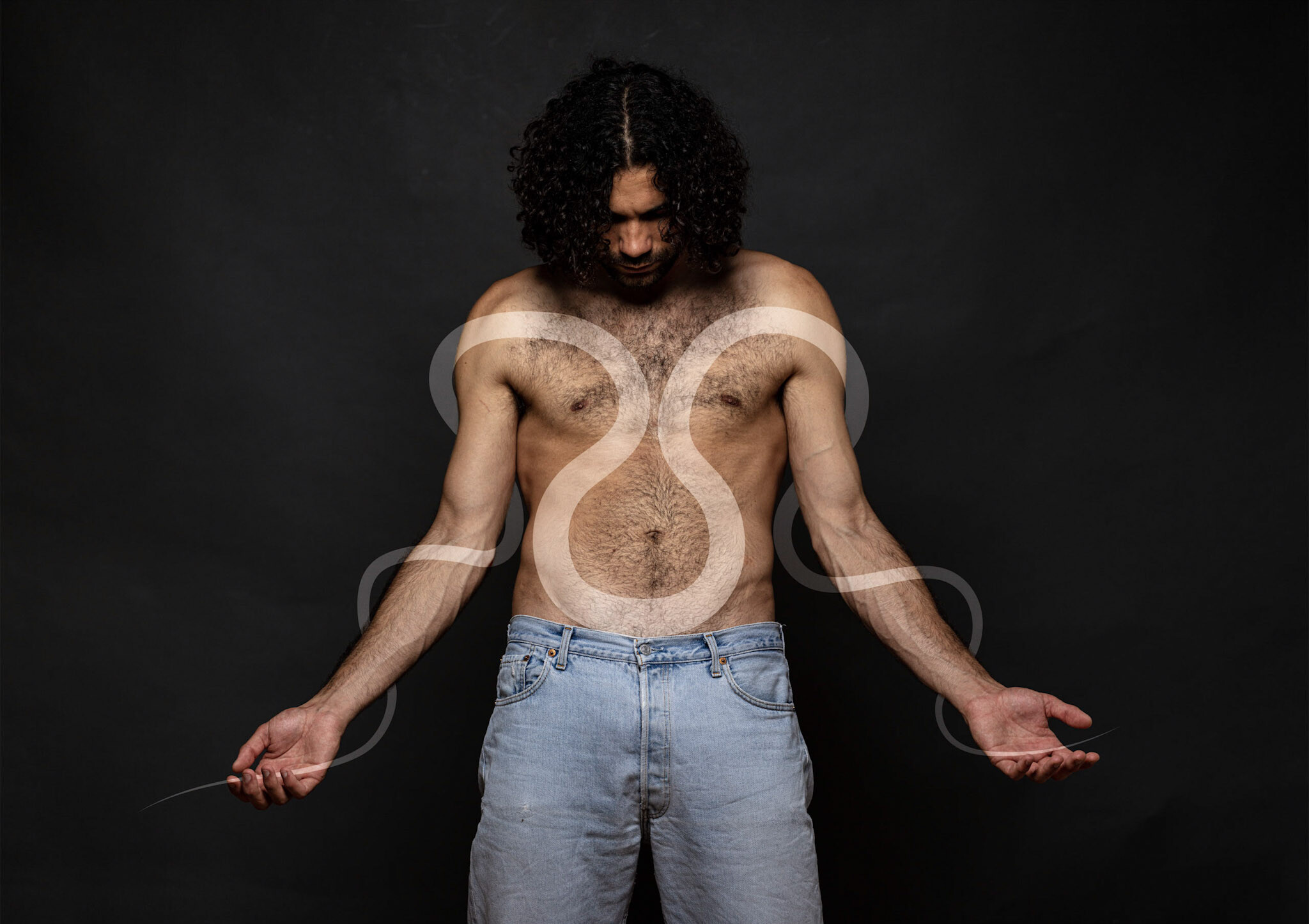 If you are excited to see more from Michael, he will be showing an exhibition of his work Jurru (snake) from 29 January – 6 June 2022 at the Art Gallery of Western Australia as part of the BlakLight Festival. The show will consist of works from early in his career to present with a focus on his Jurru story.

For more information on Michael Jalaru Torres visit his websites: Jalaru Fine Art Photography or Jalaru Photography. To connect and follow the journey on social media head to Facebook or Instagram – Jalaru Photography and Jalaru Art. To contact Michael, email jalaruphotography@live.com.au or phone 0400 569 688.