“It’s human nature that we normally reject what we don’t know. The more you know, the more you are ready to take things in, rather than shutting yourself off. That’s why, the more culture becomes normal, the more the whole environment will holistically improve.” 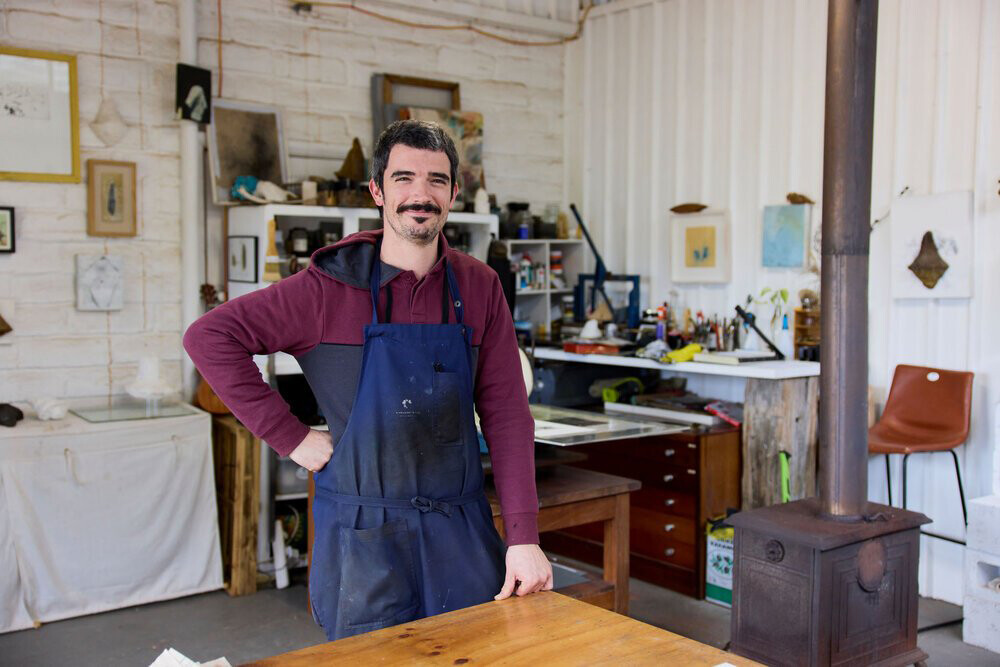 Francesco was drawn to the arts from a young age and in his high school years, attended a liceo artistico in Treviso (near Venice), a traditional style of Italian school that focuses entirely on art. He didn’t learn English or maths during this period of his education, but he did develop passion and curiosity that would stay with him for the rest of his life.

The teachers at this school also inspired him to pursue art as a career and one teacher, Gino di Pieri. introduced him to the art of printmaking, giving him the opportunity to experiment further.

“Gino showed us the process [of printmaking], even though it wasn’t part of the curriculum. I liked it. He allowed me to go in the printmaking studio, during the drawing classes, and keep practicing.”

Following high school, Francesco attended the Bologna Academy of Fine Arts, where he studied graphics for six years. During this time, he travelled to Spain and Portugal where he further refined his craft.

“All my teachers, they’re really good artists. They shared everything they knew without the fear of losing strength… it’s more like, they want to empower you. So, you keep working. Keep digging into yourself.” 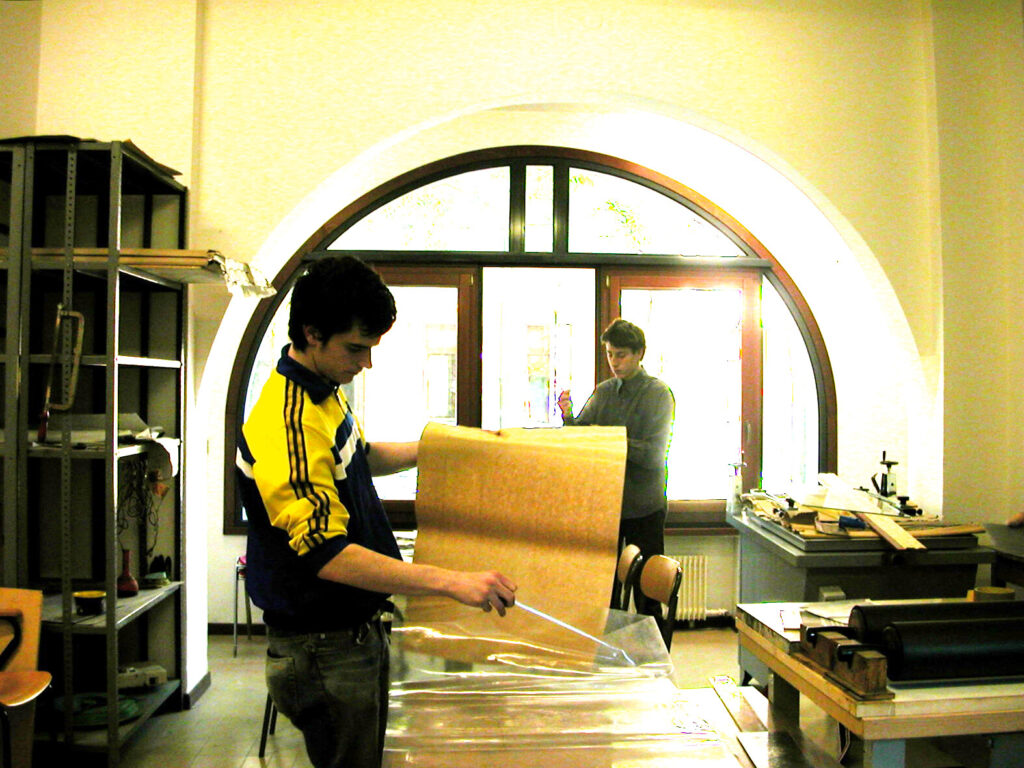 Image: Francesco during one of his high school classes. Photo by Gino di Pieri.

Francesco’s work racked up numerous accolades and can now be found in cultural institutions across Italy, Spain, and Chile. Upon completing his studies, he was ready to embark on his next adventure – travelling to Australia.

“I went to live in Spain and Portugal when I was studying, so completely avoided English. Me and my ex-girlfriend thought, ‘let’s go to Australia and travel a bit and just learn a bit of English’. [We] eventually had [to go back to Italy]… but I came back straight away. I loved it. And so then I stayed.”

Francesco first visited Margaret River on an artistic residency for his NeoNature project in 2014. There, he met renowned artist Leon Pericles. Francesco was hired as a printmaking technician, creating editioned prints for Leon – a regular practice that has been in place since the 16th century.

“It is a normal practice that the artist doesn’t print, there is a printmaker doing editioning for them. I do my own printing because I love doing it. But normally the artist is the generator, and then there’s a technician that creates the copies.” 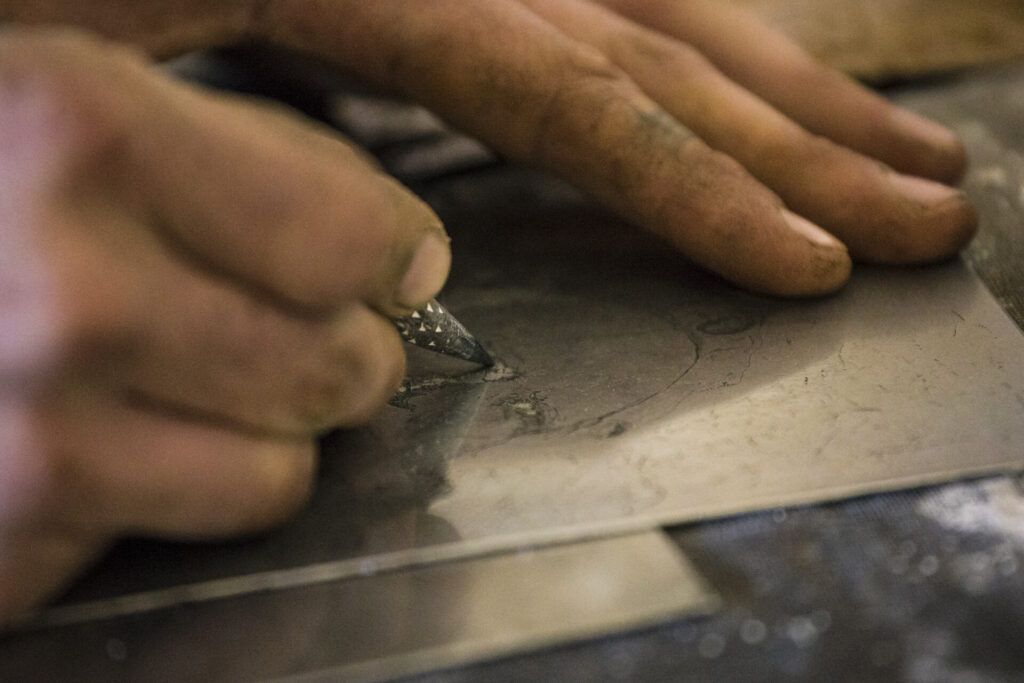 Image: Close-up of Francesco etching, an “intaglio” printmaking process whereby the maker scratches at the surface of a metal sheet to create a design. The incised line holds the ink that is then pressed to a surface to make a print. Photo by Andrea Ranzi.

Francesco has now called Margaret River home for over eight years. Though, he has been known to travel back to Italy to teach at the Bologna Academy of Fine Arts. He also has a printmaking studio in the small mountainside village of Castel del Rio, where he spends some of his time. However, no matter where he is in the world, he much prefers the quiet life.

“Where I bought the house [in Castel del Rio], it’s in such a remote area. 17 people live around the house. It is right at the top of the hill, you only go there if you need to go there. I’ve always felt the need to live remote… to be focused on what I have to do.”

While Francesco is a self-proclaimed introvert, he’s been connecting more and more with other creatives lately. In early 2022, he met Broome-based artist Jacky Cheng during her artist residency in Margaret River. They instantly connected, and she encouraged Francesco to push himself further. Meeting Jacky resulted in the birth of Francesco’s new project Connecting With The Land.

“I think she’s an amazing artist. She made me think about what I was doing… asked me to step back and question who I wanted to be as an artist. She was always straightforward with me, which I liked. Jacky helped me understand that I wasn’t connected with the land. I was feeling like that, but I wasn’t really aware of it.”

For this project, Francesco attaches etching plates to the bottom of his boots, which he then wears during his bushwalks of the Wardandi Track. While he walks, he is recording an imprint of the land (you can see a great suite of images of the process here). It’s a way of him honouring nature, and the Wardandi Noongar people, the Traditional Custodians of the land which he calls home. While the resulting prints are incredible, for Francesco it is more about the process he is taking to get those prints.

“I call it a ‘quiet performance’. Normally performance is something you do for other people in front of other people. But instead, I’m by myself in the bush.” 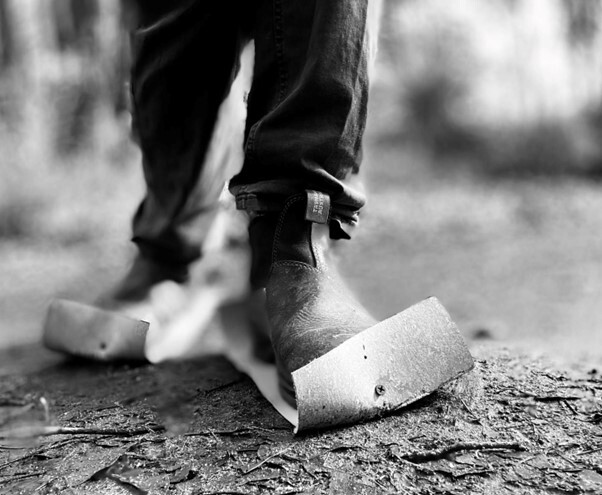 Image: Close-up of Francesco’s ‘quiet performance’. Photo by the artist.

He is also studying the local flora. Francesco has long been fascinated with the balga tree. In fact, the logo of Francesco’s business, Margaret River Printmaking, is an imprint of the cross-section of a balga tree. One of his recent works, Temple for the Locals, was created by casting the balga tree, roots and trunks with silicone rubber. Then, he created casts which he used to assemble a Greco Roman style temple. Temple For The Locals will be exhibited at Dunsborough’s Sculptures By The Bay in early March 2023. 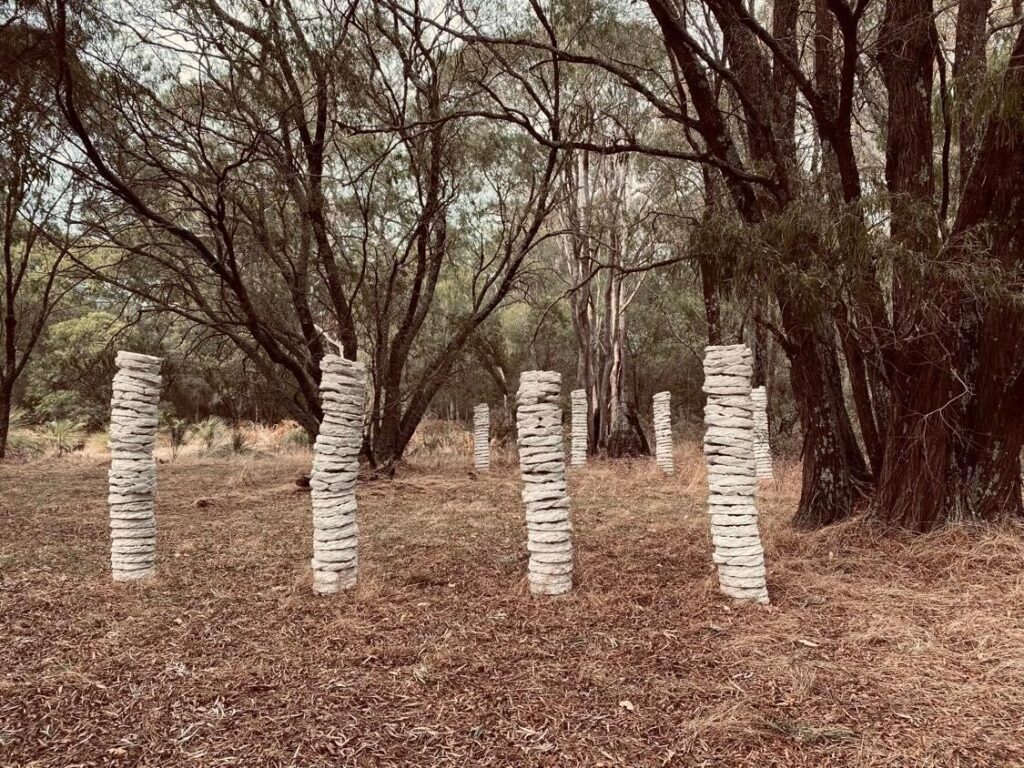 Image: Temple For The Locals by Francesco Gerronazo, assembled at the Farm, Margaret River. Photo by the artist.

Francesco is a big believer in giving back by sharing his knowledge. Through his business, Margaret River Printmaking, he runs printmaking classes for locals and tourists. The courses range from basic for those who have never explored printmaking, right through to intensive masterclasses. To sweeten the deal even further, classes often include a range of local cheese and wine. No matter what type of class it is, Francesco focuses on creating a welcoming atmosphere where people can feel comfortable to try new things.

“People who attend the classes can expect to explore themselves, learn more about the local environment and discover their own abilities. I really love being the link in between people’s ideas and the outcome. I’m not trying to generate a smaller version of Frankie. I want to know what people want to do and then help to facilitate what their needs are.” 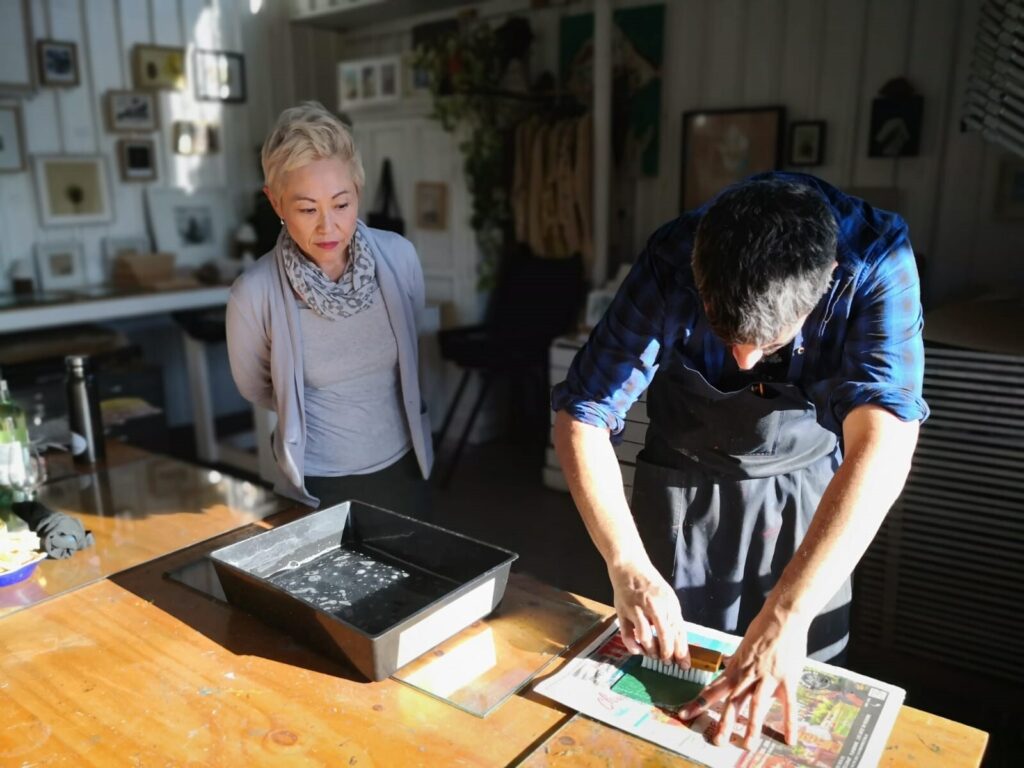 Image: Francesco demonstrates the art of solar plate etching with student Emmeline Lee during one of his STAY+CREATE printmaking classes. Photo by Colin Wee.

Over the coming months, Francesco is preparing for a major solo exhibition at the Margaret River HEART, and a group exhibition with Creative Corner, as part of the statewide Open Borders project. This comes off the back of exhibitions at Lost Eden Creative in Dwellingup (on until 2 January 2023) and Denmark’s Surf Gallery (on until 15 January 2023). He’s also exploring the stars as the basis of a new printmaking series. It seems that between exhibitions, printmaking classes and creating, Francesco is more active than ever.

When asked what advice he would give to artists starting out, Francesco responds candidly.