When Carnarvon artist Miranda Plum decided to quit her corporate job, she jumped at the chance to work at a gallery. All she had to do was send in the application and answer one simple question: Why do you want to work here?

Answering this question turned out to be a turning point for Miranda, who realised she had been in denial about what she wanted to do with her life for years. Although finding herself in this place was painful, it proved worth it as everything began to slowly unfold once she admitted to herself – she wanted to be an artist. 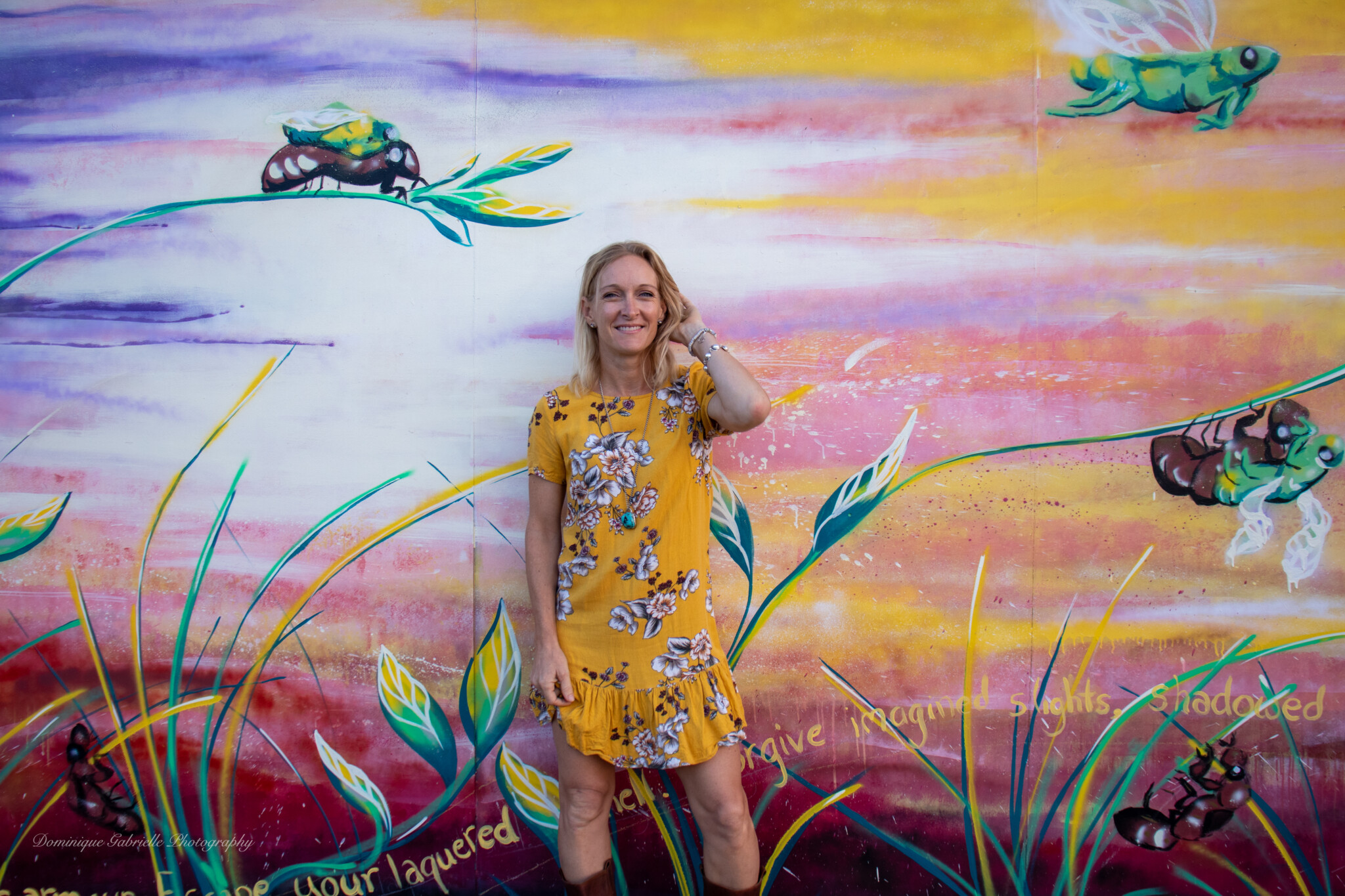 Miranda Plum in front of her mural, Armour. Photo by Dominique Visuals.

Having studied art at school, and even continuing that study during her first year at TAFE, Miranda felt like she could never fully connect with her practice. Filled with doubt about the viability of an arts career, and uncertainty about what she could offer to art itself, she decided to take a break.

Over the next 12 years Miranda travelled extensively, found work in the corporate world, and even started a family, but something was always missing. In search of the missing piece, Miranda quit her corporate life and found herself sitting down to write a job application.

“I sat there, and I tried to write this letter. I sat there all day. My husband had gone to do the shopping and had come back, and I was still just… sitting there, like a rabbit in headlights, at this computer trying to work out why I wanted to work at the Gallery. The answer was, of course, because I wanted to be an artist. I had hit a massive pain barrier. I was crying, because if I admitted it to myself, well, then what? What did that mean? Could I even do that? I felt like if I admitted this to myself there was no turning back. But I had no idea how to move forward.” 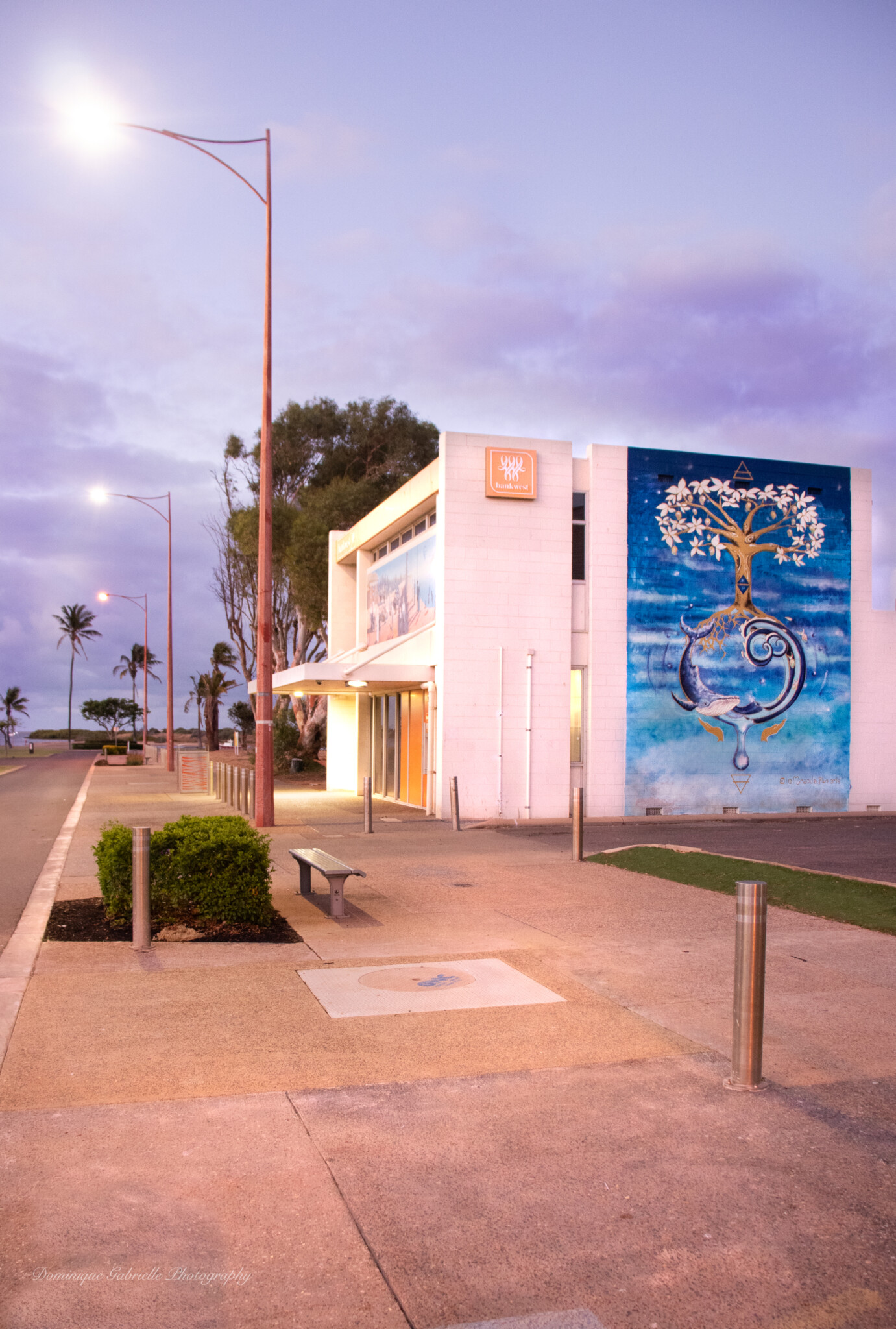 Instead, Miranda accepted a job stacking bread on supermarket shelves. While the work didn’t pay much, it allowed her the free time to follow her passions and she began painting again. Once she started, it was as if she had never stopped; and as her skills grew, so did her confidence.

Although she had not danced professionally in 20 years, Miranda began to incorporate movement into her practice to increase her creative energy, connect with herself and her work, and break down any inhibitions in her painting.

“As I’ve gotten older, dance has become more about connecting with myself and my body. It’s a way for my body to speak to me, and for me to speak to my body, to get deeply grounded so I can create from that space. Whatever space you are in at the time will come out on the canvas. It’s about moving into a certain energy and creating from there.” 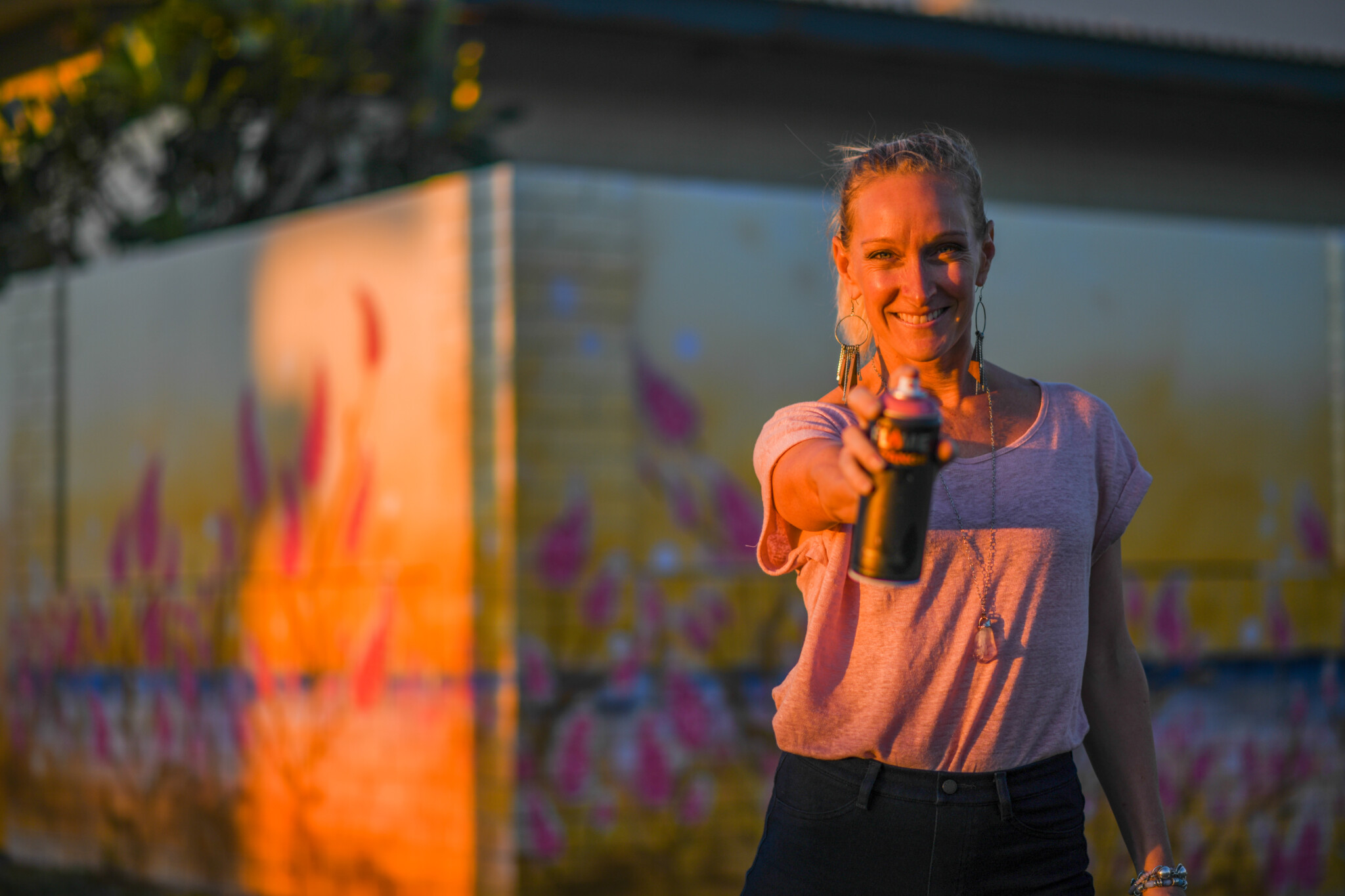 In 2021, Miranda received a grant to complete a series of murals in Carnarvon under the mentorship of experienced Broome artist Sobrane. Being able to work with a mentor on the project was an incredible experience for Miranda, allowing her to fast-track her development with far more confidence.

And, as it turned out, there was also real thirst for art in Carnarvon. People were quick to agree to have their buildings become giant works of art, and the community were excited to watch it all come together. Miranda says the most unsuspecting people will stop in their tracks and spend time just watching her paint. Many will even come past every day just to see the updates.

“There’s incredible value in exposing people to the arts. It doesn’t matter whether they’re ‘into art’ or not, just being exposed to it can really lift people and change the state they’re in. So, I found myself thinking, If I do this on the side of a building then everybody walking past gets to have that experience.”

Miranda credits the success of her practice to living in a regional town and finding inspiration in the beauty of the land. While it may not look like there are a lot of arts around, and the chance of success may be slim, she has been able to create the work for herself instead of hunting it down. 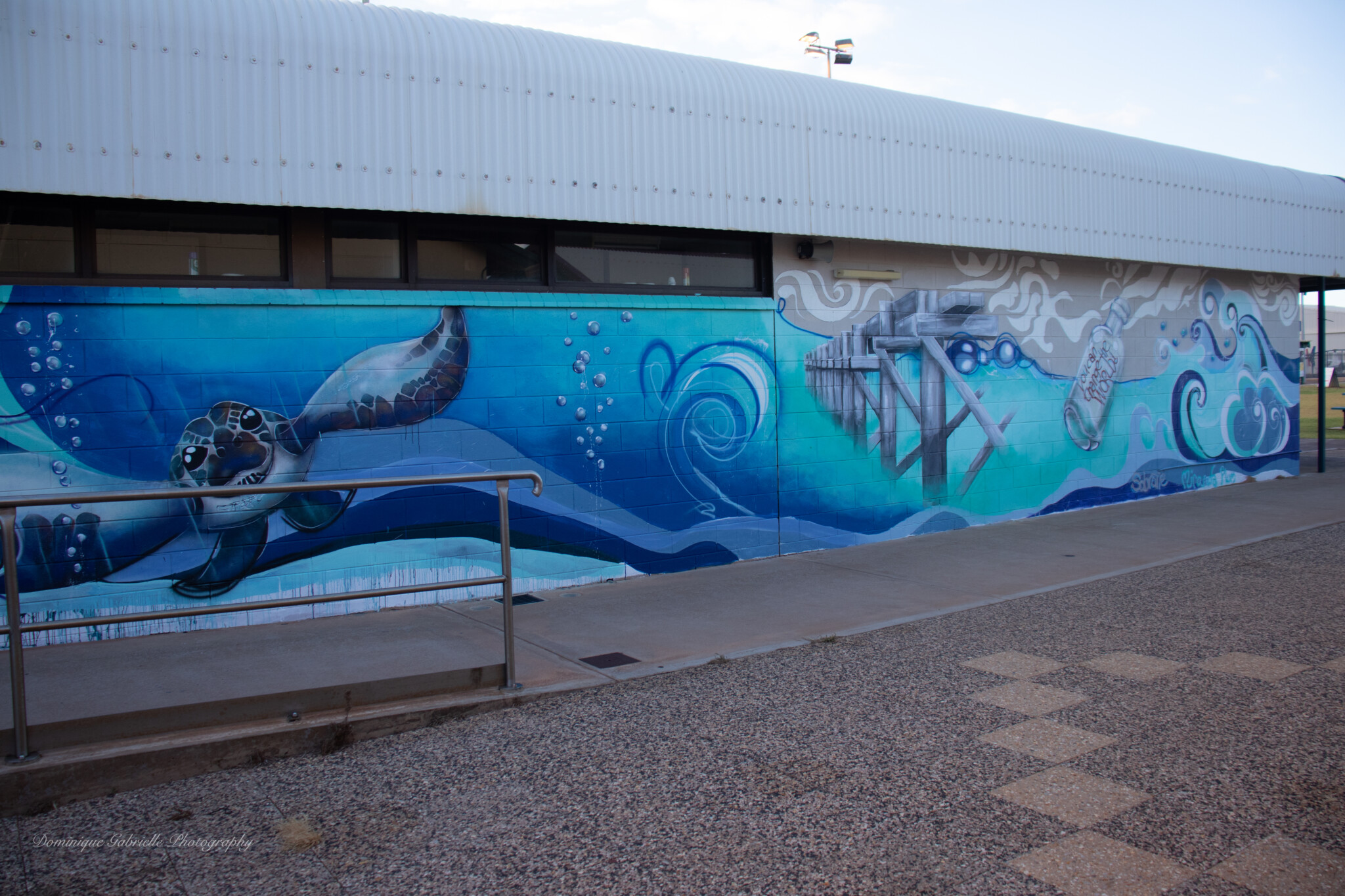 Living in Carnarvon has also allowed Miranda to meet other amazing local creatives to collaborate with; like Creality, who she has been touring with throughout the Gascoyne.

Creality, previously known as Gascoyne in May, is a cross-artform touring arts festival that runs across multiple Gascoyne locations over the course of six weeks. Local, national, and international artists are invited to tour and run community workshops to share their skills, knowledge, and talents.

“You’ve got all these creatives just creating as they go. They get given a stage to do whatever they want, and magic absolutely happens. Once a couple of the production guys and one of the photographers got together and started building sculptures. One sculpture got completely out of hand and turned into this 20-metre fire-breathing dragon made from bicycle seats and pedals with a fire cannon in its mouth. It’s completely stolen the show. If it wasn’t for the way they produce these touring shows, then this kind of stuff just wouldn’t come into existence.”

While on tour, Miranda’s act can change from location to location. In Shark Bay, she performed some free style dance and, with a fire baton in hand, lit the flame to wake up and dance with the dragon. She has also done several live painting performances incorporating movement. 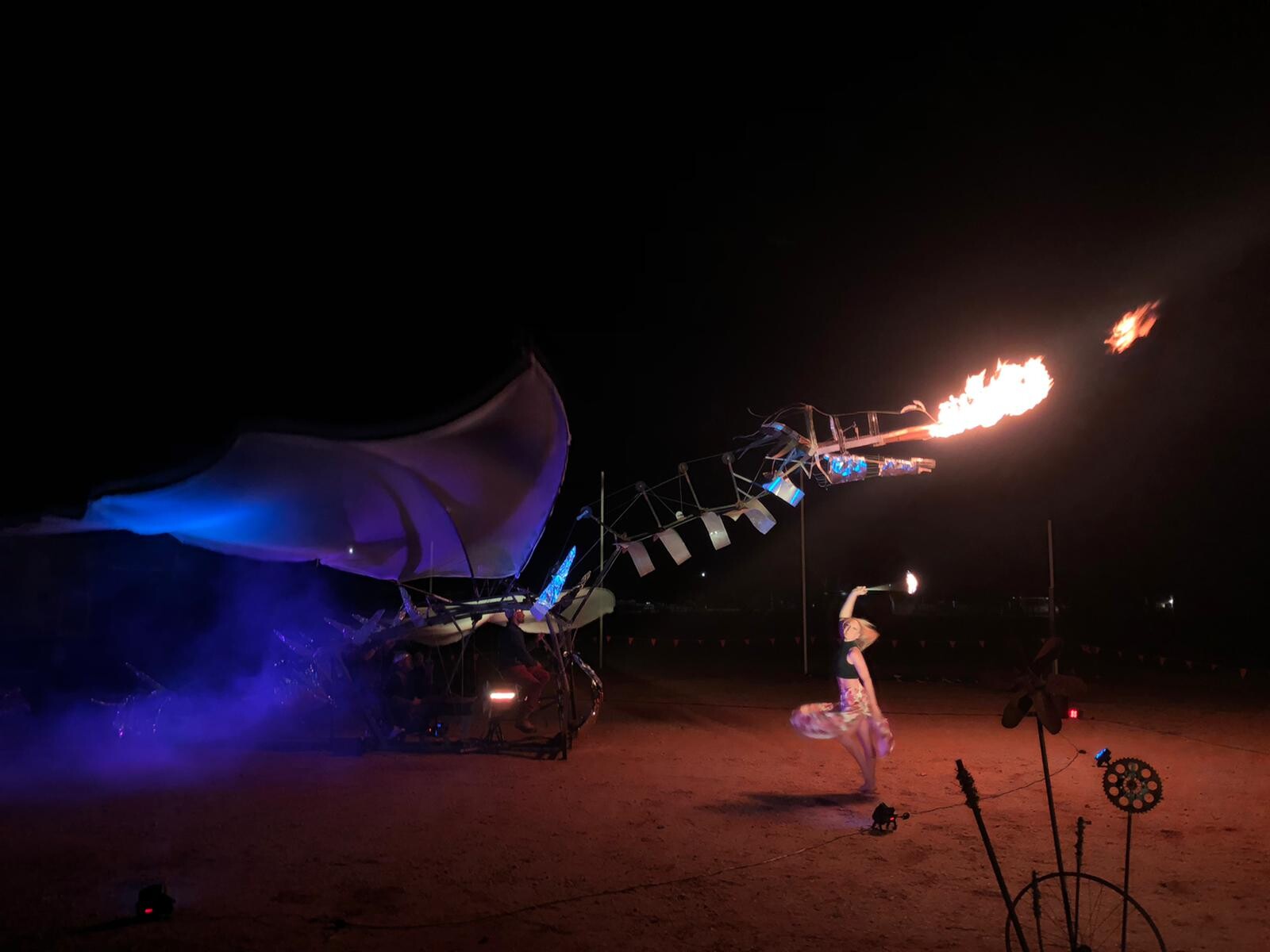 Dancing with the dragon. Courtesy of Miranda Plum.

Over the last year, Miranda has begun to share her experiences by coaching others. Through online masterclasses, she is helping other creatives understand art and creativity as an energetic form to allow them to better connect with their practice. While skills workshops and classes are readily available, Miranda instead wants to help people learn how to flavour their work and create deeply personal experiences with their art.

Understanding what has helped her connect with her own practice, Miranda has plans to take this coaching to the next level by creating an embodiment program. Incorporating movement, painting, meditation and dance, Miranda hopes to help others anchor themselves in their own bodies and find a space in which they can better create from.

Miranda has multiple projects in the pipeline she is excited to start work on and share over the coming months, including a collaboration with Inggarda artist and musician Raymond Edney. An expert in lighting, Raymond’s work often depicts beautiful river gum scenery, but he hasn’t had considerable experience in large-scale murals. Miranda believes working together, and sharing their talents with one another, will be a very special experience. 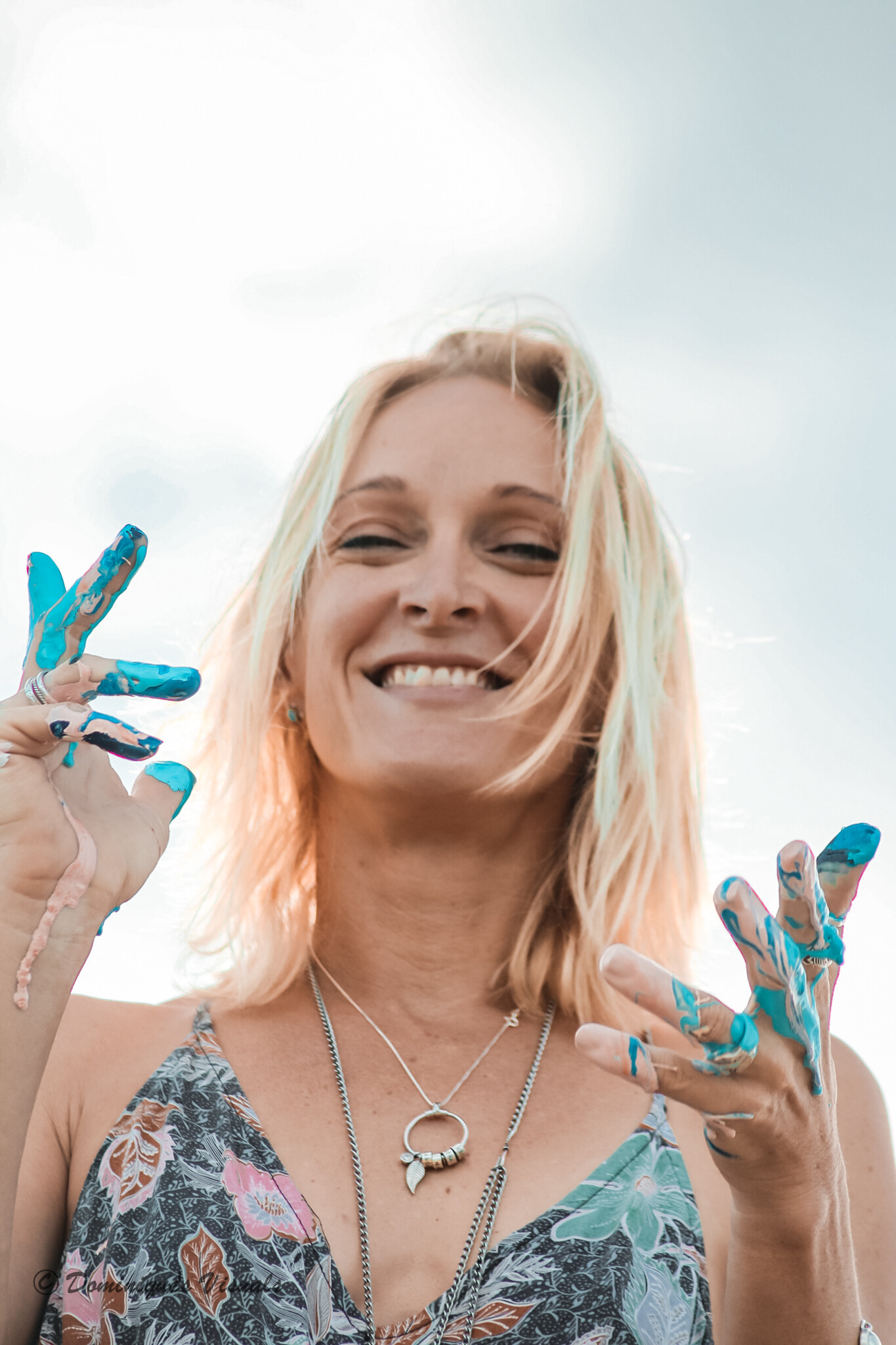 Every single one of Miranda’s Instagram-worthy murals are bound to delight and amaze, and ultimately, she hopes people get real enjoyment out of seeing them as they walk down the street. Afterall, art is powerful… and it doesn’t just change people’s state of mind, it can also change lives.

If you are in or passing through Carnarvon, keep an eye out for Miranda’s murals and remember to snap a photo and tag her on social media. She would love to see your reaction!